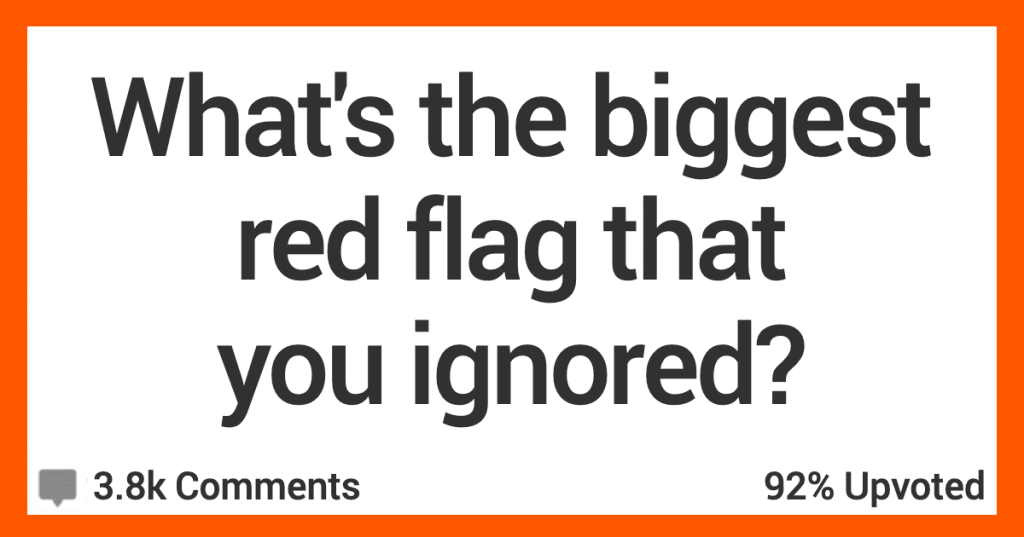 14 People Talk About the Biggest Red Flags They Ignored

You live and you learn, right?

That saying may sound corny, but it’s definitely true.

And we’re all guilty of ignoring red flags from time to time.

Check out the big red flags that AskReddit users admitted they ignored.

“He showed up with one black garbage bag of his belongings, but said it was cause his place burnt down.🚩🚩🚩

Our place must have burnt down as well, cause he left with a black garbage bag of his belongings, a little over a year later!”

“When conversations and meet-ups are always initiated by you and never by them.

“Meeting me late evening/at night mostly in the car driving around or places like Mcdonalds and Subway.

I thought he is just busy, apparently he just didnt want anybody to see us together as he was meeting someone else who was better looking in „appropriate” hours and places.

After that I learned to ignore everyone who proposes first dates at 10:30 pm “driving around and hanging out.”

““People always ask why I’m dating you because of how you look”.

He broke me down so bad I’m still picking myself back up years later.”

They were not, in fact, crazy; he was the f**king insane one.”

“She always had a nemesis.

Even after she cut them from her life, two more enemies would sprout up.

It was her causing all the drama in the end.”

“He talked major s**t about ALL of his friends, constantly.

I never even considered that he was doing the same thing to them about me.”

“This is for a job, but it was a well-established company that has been around for a long time. However, when I went in for the interview, the most senior person there had been there for two years. Everyone I talked to was there for six months, seven months, almost a year.

Hey, dum-dum, why do you think this place can’t retain employees?

Well, I found out when I got the job. I went in and was put in a completely different job that I had no interest in. At least I was finally smart enough to tell them that if I wasn’t given the position I interviewed for and was hired for, I was going to leave.

Lasted three hours. That has to be a record.

So yeah, pay attention to the turnover rates. If everyone is new and the company is not, that’s a big red flag.”

It’s crazy how long I let It go before I even realized, and even still It took years of reflection to fully recognize how bad it was.”

“His mother told me he’d always be her baby, no matter what. There was a reason for that statement. There were many reasons…

I got out of there in months. Still too long, I know, but the next woman got stuck there for years and even then it took a lot of outside help for her to be able to escape.”

It started off fairly innocently, but it go bad quickly. By the time I broke it off she was digging deep into insanity. Saying I was attracted to my sister-in-law and my actual sister.

She had banned me from speaking to female coworkers, and frequently grabbed my phone out of my hands to sift through my text messages.

Don’t put up with that nonsense. Some jealousy is understandable when circumstances dictate, but it quickly boils into a controlling thing that will make your life pure f**king hell.”

I constantly fall for it because it makes you feel validated and wanted.

I’ve recently learned that if you set a boundary early they tend to bounce (almost maliciously too) because they feel you’re less accessible as a target.”

“They once bragged about how they knew “how to twist the knife”.

At the time I just brushed it off but needless to say it didn’t end well.

People will tell you who they are, you just have to listen.”

What red flags have you ignored?