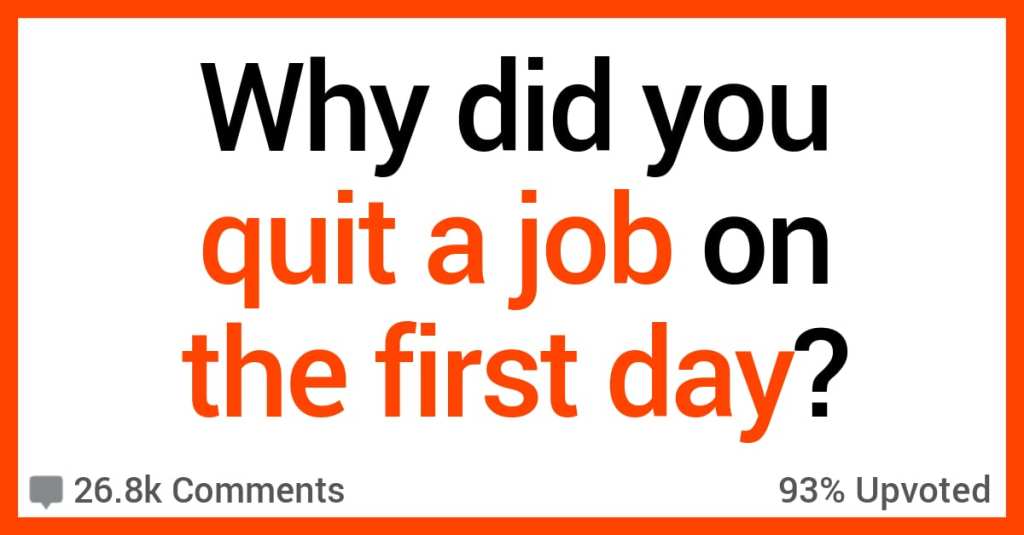 One of my brothers is the One Day King.

And that’s not a good thing!

This was a long time ago and he’s been steadily employed for many years now, but there was a time when we were in high school and college where he quit several jobs after one day for various reasons…and all of us made fun of him endlessly about it.

AskReddit users shared their stories about quitting jobs on the first day.

Let’s check them out!

“On the first day of working at Amazon warehouse the managers broke down to everyone how a 15 minute break works there.

Walking to the break room is 2 1/2 minutes. 10 minutes of actual break and then 2 1/2 minutes to go back to your stations.

“Answered an ad in the paper (this was the mid 1990s) what seemed to be an office job making sales calls when I was in college. Did a phone interview and was called back for an in person interview.

When I go to the interview I’m led into a room with about 50 other people and a small stage at the front of the room. We’re all somewhat confused as to what is going on.

Finally a guy gets on the stage and informs us that we’ve been selected for the opportunity to sell Cutco. Me and 2/3rds of the rest stood up and walked out.”

“When I burned my hands all night on the too hot plates as a food runner.

They wouldn’t let me use towels to carry them and said I just had to get used to it.

“Had an orientation for an alarm company.

Next day manager calls and says don’t worry about going into the office and to meet at “Planet Hollywood” they like to get to know the employees better over lunch.

Next day I go into the office and another employee whom I had not met says “You must be “xxxxx.” I was like “huh?”?

They responded “Light skinned, pretty boy” is how the manager described me.

In same conversation I found out no one else had ever been invited for a “get to know you” lunch.

“I was hired to be a waitress, which has a lower hourly wage due to tips.

The entire shift they had me wash dishes in the sink, but paid me waitress wages.

A few months later the restaurant was investigated for a number of fraud activity.”

Once I applied for and got a telemarketing job. I didn’t know what it entailed. After an hour I knew it was a terrible fit…auto dialing people during their dinners, trying to sell them stuff they didn’t want, reading a horrible script while sitting in a soulless grey cubicle.

I got up, went to the manager, apologized and said it wasn’t a good fit for me. He seemed understanding.

Another time I attended a “make easy money at this job” seminar and it turns out it was selling knives door to door. Idk if I technically “quit” or just noped out at the end of it.”

Burned my hand numerous times because they gave me plates that came right from the oven and never said a word. End of the shift I told the head chef I was done.

He called me soft and Said I was the third person to quit on him after a day. I said “maybe it’s the way you treat people”.”

“It was a small independent insurance agency in 2006.

My first day there the owner (a true fossil) said email and fax were strictly forbidden as he only ‘believed in’ communication in person, by phone, or through mail. Left for lunch and never went back. I couldn’t imagine the inefficiency I’d have dealt with had I stayed.

They ultimately closed their doors so it was definitely the right decision.”

9. You did the right thing.

“I interviewed for a “professional marketing assistant” and got the job straight away. I was under the impression that I would be an assistant to the man I was interviewed by.

When I showed up for my first day, the same waiting room I was in the previous day was FULL of people. I quickly learned that we were all hired, and that I would be a door to door salesperson selling some pretty useless s**t.

I spent my entire day inside a Starbucks applying for other jobs and went home, got paid, but never went back.”

First sale call was to a single elderly woman who was supporting her son in hospital (they got us in the door by offering a free carpet clean as a demonstration).

The supervisor training me pushed and pushed to make the sale until this old woman was in tears. Just as she was about to sign the paperwork I asked if she actually wanted to vacuum and she said it was lovely but she couldn’t afford it. I took the paperwork away from her and said not to worry.

Outside I told the supervisor I quit to which he replied I would’ve been fired anyway. No love lost. I hung around for half an hour playing on my phone to make sure the supervisor left because he was a real piece of work.”

“It was a petrol station and the manager wanted me to work for free until I had learned their computer systems to what he deemed a satisfactory extent.

I agreed to do it, because I needed a job, and he brought me in at 7 am on my first day, however he was not present to go through the training with me, so I was just standing around kind of helping out on the forecourt but not really knowing what I should be doing. Not learning anything.

After about an hour and a half without the manager showing up or anyone training me on anything, I decided that I wasn’t going to continue to be taken advantage of and told the cashier to pass on the message to the manager that I had quit.”

“Worked at McDonald’s years ago in their Assistant Manager training program. Had gotten hired right out of the Army.

First day I met with the Store Manager where I’d be working and training and noted that she spent majority of the time doing entry level work and then working OT to do store manager work.

She told me this was pretty common because of the type of people they’d hire. Her “office” was a counter and she told me she had bought a chair but corporate made her remove it. She was really nice, worked her a** off and was intelligent and told me she’d been at McDonald’s for 10 years.

I imagined working my a** off only to be told I couldn’t have a chair and decided that night I wasn’t going to work for a company like that.”

“My first day working at EB games. I was super excited to be there!

The first half of my shift was basically “tidy up the shelves” It was a high traffic location so the shelves ALWAYS need tidying.

After 5 hours of following kids around and putting things away I go on break.

When I come back my Manager is standing in his strangely empty store absolutely aghast. Staring at a HUGE steaming pile of s**t on the carpeted floor. Apparently a homeless person had walked in. Without saying a single word he Dropped trou and emptied his bowls.

My boss at me and says. “Oh good, you’re back. Just in time. Clean that up, I’m going for lunch.” I laughed at him and told him you can’t be serious. I’m not going near that.

He responds with. “it’s your job, I’m taking a break. I want it gone before I get back.” I told he’s going to have to deal with it on his own because I Don’t need this job that bad. So I quit. I grabbed my coat and went home.

One week later the district manager calls me up to apologize and offer me my job back.”

“I got hired at a very small knock off dollar store in an old, failing mall. The owner was foreign with a very thick accent.

He told me I’d get $6 an hour but neglected to mention it was under the table. I spent about an hour stocking the very overly cluttered shelves before I was told to get more chips out of the back storage area.

I walk back there and theres about a dozen men sitting on boxes all cramed into a small back room. I asked where the chips were and these guys all glared at me. They started speaking in another language and rapidly motion towards me.

Then one guy got up and asked what I needed. I told him I was supposed to get a box of chips and he got a box out of the pile and handed it to me. The entire time these guys are all staring at me. Everything back there looked shady as all hell and it was very uncomfortable.

A while later I had to use the restroom which was also in the back. These guys all just wordlessly glared at me while I went into the woman’s restroom. While I was in the restroom, someone tried to open the door.

I was the only woman there. The owner told me he wanted me to come back that night late in the evening well after the mall closed. I didn’t show up. I came in the next morning and lied about why I couldn’t work there.

He still gave me the few bucks from what little time I did work. I don’t know what in the hell that guy had going on there and I didn’t want to find out.”

Now we want to hear your stories!

If you’ve ever quit a job on the first day, tell us about it in the comments.