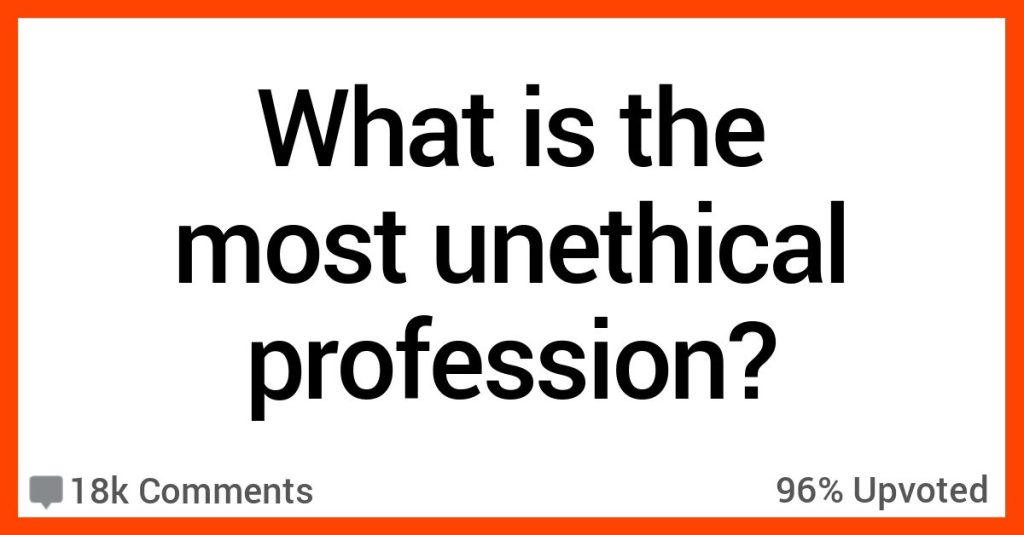 14 Professions People Think Are Unethical Across The Board

Someone has to do it, though, but listen – it’s still not the best way to make a buck.

If you’re looking to avoid jobs that will suck out your soul, here’s a quick list of 14 professions you might want to avoid.

Essential oil companies that prey on house wives. Then they give the “you can actually get a discount if you become a sales representative yourself!”

It’s a Placebo effect and Ponzi scheme all in one!

Paparazzi, they follow famous people around and harass them until they snap and yell at them for profit.

Was in LA grabbing some pizza late at night and I think Demi Lovato or Selena Gomez was exiting some upscale restaurant right in front of it, nearly got into a fight with some paparazzi because they thought I was trying to beat them to the photos, complete scumbags.

12. I’m not sure these are technically professions.

Not one that jumps to the front of minds: house flippers. I’m a Realtor and the things I’ve seen house flippers try to pull over on my clients is astounding. Sure, there are some good ones that do it by the book but the bigger ones that buy in bulk just paper over everything, cut corners, and care only about their bottom line. I work with a lot of first time home buyers and without me there they would unknowingly be walking into a biohazard death trap.

That and these companies prey upon people in dire circumstances and lowball the heck out of them to secure their property.

This might get buried, but any home shopping network like QVC or HSN. I worked for HSN for awhile some years ago and the amount of old people that had no clue what they were buying that I had to scam because it was my “job” is insane.

I had one of the nicest old people call me and just want to chat and then ordered the “item of the day” and proceed to tell me that she had like 10 of them in her back room completely unopened but she couldn’t pass up this deal.

I had another lady that wanted to apply for the credit card because her daughter took away all of her cards because she was broke and couldn’t pay her bills.

I couldn’t say no. I had to do it or get wrote up. I ended up developing a bit of a nervous tick from it (that I still battle with to this day) and finally just ended up quitting the day after I burned all my vacation hours because my mental health wasn’t worth that.

Seriously. F**k shopping networks that prey on old people. They justify it as if they’re providing a service. Disgusting.

9. You have to protect the old people.

People who go door to door trying to make you switch providers. It’s a scam that preys on old people.

I “interviewed” with one of those companies once. Totally vague on the job description. I arrive to see the daily “motiviation” in full swing, partnered up with an experienced guy who took me on his rounds and drilled the propaganda into me.

It was everything you say: Preying on old people and new mothers to switch to a new energy company. purely on the premise that it was representatively cheaper (without looking at their actual bills to be sure).

End of the day I fill out a questionnaire on the propaganda, and the manager offers me the job. Didn’t really want it, but needed a job. However, I never really accept a job on the spot – I always want to sleep on it before saying yes. The manager told me the offer was void the moment I left his office.

So I accepted… slept on it… realised I REALLY didn’t want the job, and called in the next day to tell them I wasn’t taking it.

NFT sellers are huuuge scam artists and no one talks about it. definition of hack frauds.

A lot people are talking about it especially on art Twitter. It’s just that the NFT market keeps getting bigger with all these dumb celebrities jumping on board.

Like Senator Joe Manchin’s daughter who increased the price of Epi pens from $50 to $600?

car mechanics that try to take advantage of women that need a quick car fix, and rob them dry for what only needed to be a $50 oil change.

My dad was a mobile car mechanic and he would barely make a profit because he was simply too damn honest to do that. And he always tells me its better to learn to do that stuff yourself than to pay a mechanic to do something in half the time it would take you, but double the cost.

Most of these are criminal or borderline criminal professions.

I’m a bartender. I frequently find myself questioning whether my profession is ethical. Leaning no.

I work mainly in a casino Bar, and now the sports bar feels almost ok by comparison.

3. This should have been higher up.

This far down I haven’t seen one mention of lobbyists either.

2. They have no qualifications.

Can I say Life Coaches? They basically pretend to be therapists, charge people for really poor advice that could be really dangerous to their clients, all while avoiding the legal oversight actual therapists have by calling it “life coaching”.

They have no standardization, no regulatory checks, and no way to report unethical behavior.

1. Actual blood on their hands.

They are completely uneeded useless middlemen that significantly jack up the prices of medicine to line their pockets. People die because of them.

I definitely hope that I never need money more than I need to stay away from these professions. Finger’s crossed.

What about you? Any firsthand experience? Any professions we missed? Tell us about it in the comments!