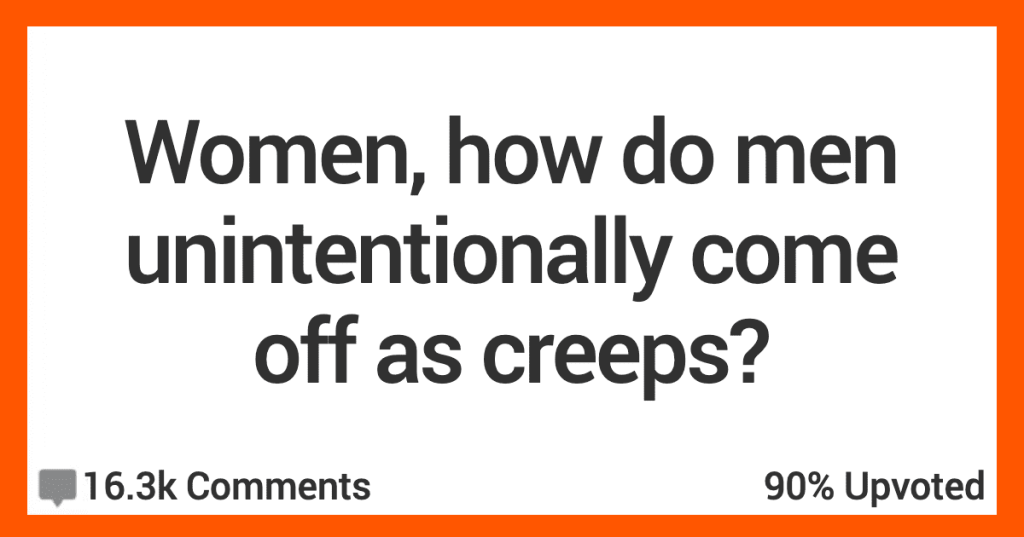 It’s a bit of a sad state of affairs when men are scaring women in public and don’t even realize what’s going on in the moment. Women think men know when they’re being creepy, but what if that’s not always true?

These 14 women are giving them the benefit of the doubt, and sharing these ways they think men are unintentionally freaking women out.

“I don’t know why you’re acting so cautious. If I wanted to kill you, I would have already done it.”

Said to me by a friend of a friend I was meeting because it was his first time in a foreign country.

When men try to show off their “dominance” over you or anyone really.

Like when you mention something to a guy about another guy and he goes “I’ll k*ll anyone who talks to you” it’s quite frightening really.

Place we were going to go was closed, so he suggested a walk around the nearby lake, I stupidly agreed.

Even though it was a usually busy public area, it was pitch black and almost no one was out – it was late and night and winter.

The further we got from the street, the creepier and angrier he was getting – like he had been wearing a mask and it was starting to slip off. I was getting legitimately scared.

Right as I made up my mind to turn around and leave, he said, “It’s such a beautiful night. So peaceful and quiet out here. If I wanted to, I could really take my time raping and killing you right here and no one would even hear us.”

And then he laughed a big laugh, and tried to pull me in for a kiss. Said he just had an unconventional sense of humor and felt comfortable enough with me to be himself.

A guy I’m seeing took me out to a baseball game for our first date. It was nice, I didn’t get any weird vibes from him at all. After the game, he asked if I wanted to go see some of the spots he likes to go walking.

I didn’t think much about it until we got there and i realized he was basically taking me to the woods in the dark. He told me to follow him and I’m thinking I’m about to get killed but it turns out he just wanted to show me his favorite place to go on walks and chill because you can see the entire city from there and at night it looks really pretty.

He took me to a couple more trails that night and I ended up having a great time and forgot that it’s pitch black outside and I’m with a guy I’ve never gone out with before out in nature.

Definitely thought I was going to get killed at first though.

One time I was closing up shop not realizing a customer was still in the store (I was a new manager) and when he walked up to the register while I was taking out the till he said “wouldn’t it be funny if I just robbed you right now?” and laughed.

I was so shocked and scared I just looked at my cashier and we nervous laughed and politely asked him to leave, which he did.

We freaked out after we locked to door behind him.

Pick me up. I’m short and have a slight build.

It’s not that I’m scared of them trying to prove how strong they are, I’m just terrified of being dropped.

Years ago I went out with this dude and during snacks and a drink, it was pretty clear we weren’t a good match. I politely turned down another round and thanked him. I put my bag over my shoulder and began walking to the bar to pay. Not more than two steps from the table the dude YANKS my purse strap and says

Really taken aback, I hugged him and shuffled quickly to pay and get out of there. As I was paying I explained to the waitress whom I knew from another job that the dude was super creepy and asked if I could sneak down the back stairs. She let me go through and I rushed down the backstairs and then outside to my car.

Breathing a deep sigh I got out of the parking lot and at the first red light at the corner where the restaurant was….was the creepy dude crossing the street. Without any hint of emotion, he whipped out a pen and wrote my licence plate down on his hand.

Never saw him again, that I know of.

Hovering. Don’t hover behind me.

That’s one of the very few things that makes me nervous.

6. Definitely don’t do that.

This reminds me of my friends experience. She took her dog to the dog park and let him off the leash (no other dogs were there). A guy (with no dog) randomly enters the park and approaches my friend.

My friend was trying to get her dogs leash back on when he grabbed the dog by the collar. First red flag get your hands off of my dog! He says Hi to her and makes small talk before asking for her number. She told him no and that she had a boyfriend and he said ok and left.

The next day tho she gets a text from an unknown number. This guy had looked at her dogs leash and somehow remembered her number from the tag. Unfortunately her home address is also on the dog tag so her and her boyfriend (who live together) upgraded security heavily. She never answered the guy and he eventually stopped trying but WTF??

Pretending we’re deeper friends than we are, being overly familiar and then acting like they have a “right” to you.

Had a guy do this in college. When I told him he didn’t get to dictate who I talk to, he spit his drink in my face.

I barely knew him!

I walk and today a guy on motorcycle pulled up on me 3x. I mean dude if i dont want to engage, then dont follow, continue to pull over to meet me or whatever

Adding: wanted to add that although my area feels very safe, I dont wanna see any vehicle roll up on me(no shoulder!), because on President’s Day, a car rolled up on me, windows came down, airsoft guns came out, and they shot me with rock salt😤

Call me nicknames like “sweetheart” or “baby girl” when I’ve never met them before.

2. Take some big steps back, please.

First date, didn’t really know him. Comes to my apartment to pick me up, invite him in and he proceeds to tell me how he is going to rearrange the furniture when he moves in.

Back in the 70’s I always picked up hitchhikers, picked up this guy, he gets in then looks at me and says “you know you should really be careful about who you pick up”.

Guy I was living with:”I know you will never leave me because you can’t outrun a bullet”.

1. No one likes to feel trapped.

Blocking the doorway – especially during an argument.

Ex did that and would make himself bigger (spreading his arms etc) so I couldn’t leave the room.

I don’t know if these are always unintentional, but dudes should definitely stop, either way.

What are some other behaviors you would put on this list? Let us know in the comments!