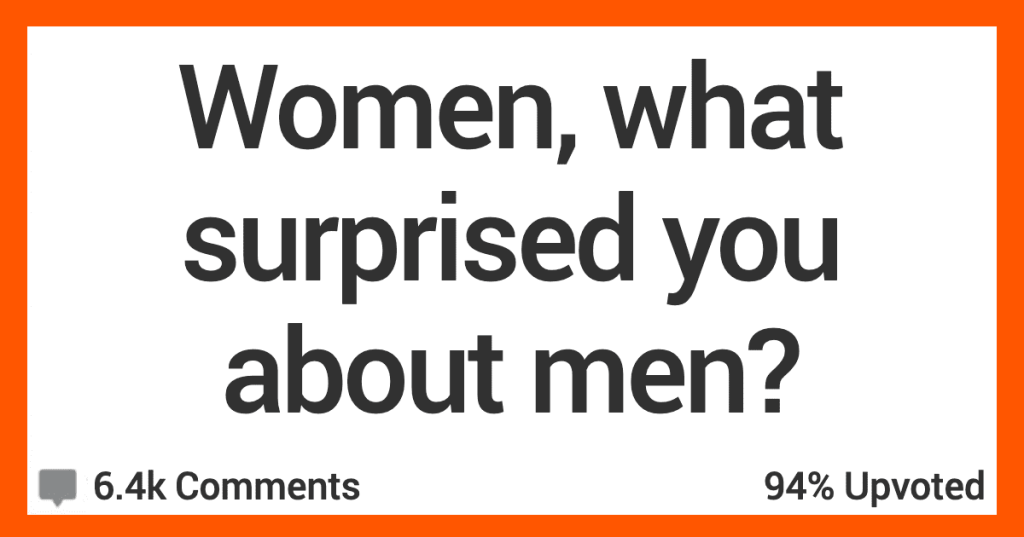 Men sure can be mysterious, right, ladies?

And today we’re going to hear from women about what they’ve learned about men over the years.

“Many men get an er**tion in the morning. Morning moves around the globe every 24 hours.

This means that there is an e**ction wave that has been going around the globe without end since the beginning of any species with which this started.”

As in, you give them a compliment and they treasure it like the world.

It’s very sweet that they value them so much, but also kind of sad that they don’t feel appreciated to a point where a simple “You’re very nice” or “You’re really funny” is solid gold to them.”

“That they want to be loved as badly as we do and they’re also mushy gushy.

“I am constantly floored by how little some men know about their close friends’ lives!

I know multiple men who speak to their best friends super regularly, but could not say with certainty if they’re single, what kind of work they do/where they work, etc.

I don’t understand it at all, but I just keep meeting men like this.”

“At my first job, I used to work mostly with women, then switched to IT and now it’s mostly men.

I was surprised to learn that guys don’t hold a grudge as much as the women I worked with did. We’d have an argument on Friday, I was worked up about it all weekend and worried how it would affect our future relationship, then come Monday and boom…nothing.

They genuinely seemed like they let it go. It’s a pretty sweet thing.”

“Most men don’t actually know how to fix things.

They just pull it apart and put it back together again and hope for the best.”

“That when a guy is invested in a girl they are oblivious to other flirting women.

“That most men don’t care that your stomach isn’t flat.

One or two “imperfections” (that you see on yourself) just don’t matter to them.”

“They can sit there and think about nothing.

Their brains have a neutral gear.”

“That if you show them exactly how much you appreciate them they are more likely to be motivated to complete a task than if you nag them.”

“Anything a woman notices about herself or her friends, guys aren’t even thinking about it. 99% of the time, they’re just thinking “this is a woman and she’s talking to ME?!?””

“Dudes will beat the living s**t out of each other, argue about the most serious s**t, and be best buds again by the end of the day.

Sometimes monkey brain can be beneficial.”

Lay your head in my lap and let me pet you you know you like it you fall asleep within minutes.”

What have you learned from dating men or women?