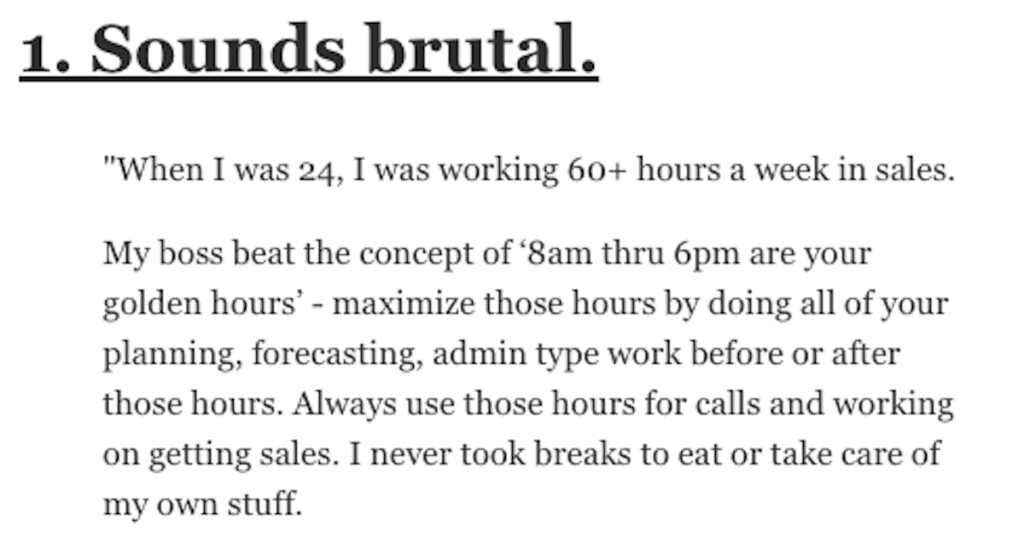 When Did You Say “What Am I Doing With My Life?” People Shared Their Stories.

Life is hard, no doubt about it.

You go through great times, terrible times, and everything in between.

And sometimes, when things aren’t going well, you look in the mirror and say, “what am I doing with my life?”

So let’s hear from folks on AskReddit about the moments when they asked themselves that question.

My boss beat the concept of ‘8am thru 6pm are your golden hours’ – maximize those hours by doing all of your planning, forecasting, admin type work before or after those hours. Always use those hours for calls and working on getting sales. I never took breaks to eat or take care of my own stuff.

One day I was driving home from work and I was pulled over by a cop. My vehicles registration was expired for months and I never noticed because I was so focused on my job.

I was arrested by the local police (even though it was only a violation technically). Sitting in the holding room at the local police station – I thought “why am I here?” Then I considered my job that I was busting my a** at (to live below the poverty line). That’s when I thought “what the hell am I doing with my life”.

Got the violation rescinded, arrest stripped from the record, got a new job and haven’t looked back. If your work wants you to prioritize them over yourself, get the hell out of there.”

Everyone who runs a marathon asks this question.”

“I had a pretty sheltered childhood, also no real peer group because I was so badly b**lied.

When I got into college holy s**t did I party. I barely got an Associates degree. I said yes to any and everyone who wanted to be my friend. Got into some very bad situations but luck was on my side. When I was 21 I was told I had a heart defect and needed immediate surgery.

The second day after having the chest tube/vent off, I had to walk down the hall. There was a scenic view of Boston from MGH with one lone tree with bright yellow leaves. I stared at that tree and committed to getting into nursing school. I am so d**n lucky.”

“I’d been living with an emotionally a**sive man for 13 years. We had a child. There was nothing that I could do right, so I tried to do nothing, and also everything, all at once.

He was convinced he needed a new phone. We went and got him a phone which is, of course, my phone on my account that I pay for. The day after, he went to work and brought his new phone. The old phone was on his desk still getting service, I was seeing the screen light up with alerts all day long. I happened to be standing next to it near the end of the day and I see in the preview window a message containing multiple hearts.

Soon I’m reading all the Instagram chats of my boyfriend and his other girlfriend-an ex from years ago. It had already reached the point where they were planning on how he was going to leave me and she was repurposing a room in her house for his office.

My first thought was ‘What the hell am I doing with my life?’. I’d allowed this man to make my life so small and made excuses for his humiliating treatment of me to friends and neighbors because ‘I loved him’. And in return I got absolutely nothing, not even enough respect to not cheat. I had wasted a decade.

An hour later I had picked him up from work and we were breaking up in the car. He couldn’t decide which s**tty defense to go with so he went with both: I was confused and wrong about their s**ting and nudes but also whatever WAS happening was my fault.

I allowed him to go inside and pack a bag and then I was free. Free from tiptoeing around the house. Free from being punished for being ‘too involved’ in parenting. Free to go back to school like I’d wanted to for years now at age 40,because although he would say I could do whatever I wanted we both knew that wasn’t true and he would make life very difficult.

Now I know exactly what I’m doing with my life.”

“I was drinking a lot in college. Like every day and early. One morning, I got in an argument with my brother/roommate because he’d drank my Cherry Coke out of the fridge.

“I was gonna put RUM in that before I went to class!” I heard myself say. And then it dawned on me that the class was at 10AM and I was looking to drink at it.

I have a much healthier relationship with al**hol now.”

“I’m a man in my mid-30s. I have the family I always dreamed of having. I have a stable job, certainly not rich, but comfortable, and not wanting for anything.

The other day I was getting to know someone over coffee (business related), and he asked me something about my hopes and dreams. In that moment it dawned on me: I have achieved everything I hoped and dreamed for, but I am still young, and honestly my hopes and dreams were not particularly ambitious.

So lately I’ve been asking myself what the hell I’m doing with my life, haha. I don’t want to risk what I have, but I do need to start dreaming bigger somehow.”

“I was 18 working at a fast food place arguing with a man 30 years older than me, making the same that I was.

All I could think was “f**k, that’s going to be me”. Went to trade school a month later, became a foreman.”

“Today, when I realised that although I’ve been making changes I’m not actually making the changes and nothing feels exciting or fun anymore.

So today is the last day of that, I’m unhappy and I don’t want to be.”

“I had worked 15 years in baking. I am fully qualified, I’ve had 6 apprentices become bakers under me. I was in charge of the biggest production in bakery’s in my city.

I then quit and move to a small town (5,000 people) got a job in the small bakery, where I was micromanaged, underpaid and my ideas were all shot down(if I just made an idea and gave it to the front girls and it sold well I’d get told how crap my idea was but they still made it because it sold)

After 3 years of it getting worse without realising, the alc**holic boss yelled at me for singing to myself.

I applied for jobs I’ve never done before, I got one and learnt how to drive a forklift and then a month later the better paying/hours one said i got the job and went to that one.

I didn’t realise I wasn’t a piece of s**t until I worked for other people, I had been beaten down so much, it’s so nice to work with people who appreciate my work.”

“Right now, as I’m struggling to finish my PhD.

The mental health burden and burnout is so bad that I’ve cried while doing my tasks more times than I can count.

It doesn’t really increase my employability…honestly I don’t know why I’m doing this.”

“I woke up one morning and was looking at some money on my table that I received from selling drugs.

My paycheck from my job just hit and it was only like 600 (full time minimum wage baby) The amount on the table was about 400.

I couldn’t pay my bills no matter what I did and I knew I needed to improve myself.”

“After a trek with my father, he asked me about my love situation and I was embarrassed to tell him that I got dumped by a worthless person.

It was either the trek or him, that made me realise that I need to stop “falling in love” with people who weren’t worth it.

Two weeks later I met my husband and we have been together for 6 years today.”

Have you ever said this to yourself?