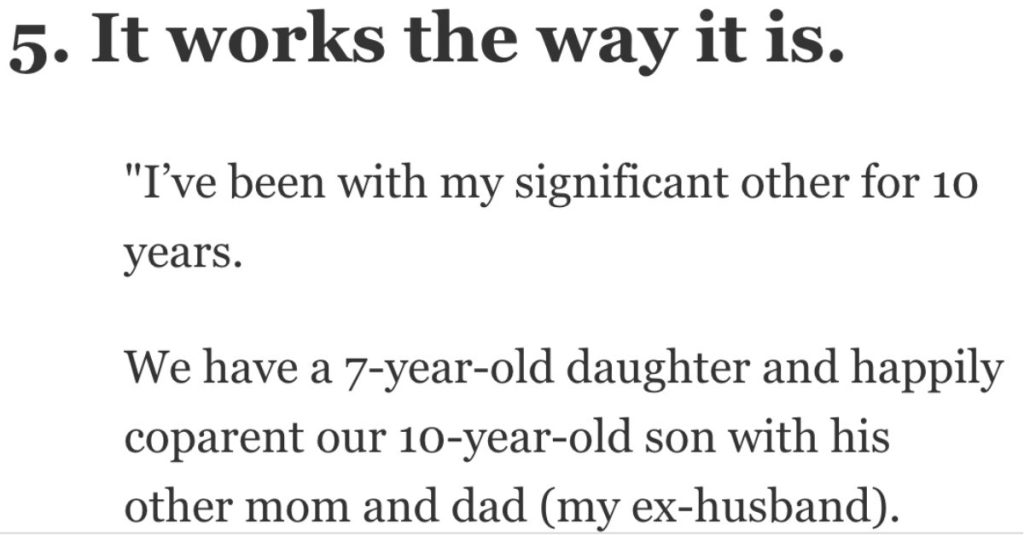 Marriage isn’t for everyone, and whether or not a couple is officially wed really isn’t anyone’s business but theirs.

That said, anyone who has been in a long term relationship without discussing marriage knows that everyone in your lives thinks it’s their business.

If you’re curious why people might choose to stay together but shun the rings and license and other official trappings, these 15 folks are willing to share!

15. They didn’t have the best role models.

“Both my and my partner’s parents’ marriages were a mess from start to finish. We’re in our late 20s now and have been together since we were 16. I think, deep down, I’m superstitious that if we get married, things will be ruined.”

14. They realized it didn’t matter.

“We met in college. We were too young for marriage then, plus we were busy planning our life. We spent a few years in grad school, and then each got into our careers. Next thing you know, it’s been 10 years.”

At first, it was money (not enough). Then, it was money (now that we can afford it, do we really want to spend that way?). At the core, we just discovered we don’t subscribe to conventional marriage ideals.”

“We decided it just meant more to us to be together because we wanted to be, not because we were legally obligated.”

“I’ve been with him 18 years. I love him dearly, and I’ll likely be with him ’til the end. But he’s TERRIBLE with money. He’s gone bankrupt twice.

He was in over £18,000 of debt and only realized how much when he tried to get a loan for his daughter’s wedding and couldn’t borrow a penny more.

He’s paid off his debts, and he says he’s learned to be fiscally responsible (he lost his daughter over the last one; she cut him out of her life). But I’ll never trust him with money.

The house is in my name, and I pay all the bills. He pays for food and incidentals. Nothing is in joint names.

If I married him and he f**ked up again, I’d be liable for his debts. No, thank you.”

“We don’t want our student loan debt to fall on the other person when we die (yes, we will be making monthly payments until we die).

We don’t want to have kids or buy a home, so we’ve just stayed completely separate on paper to make sure our individual debt dies with us.”

“I’ve been with my partner for 16 years. We have two kids and are unmarried. People always demand an explanation, and I like to flip the question and ask why they chose to marry.

First of all, I have nothing against marriage; it is just not for everyone. Our reasoning is that we have never found it necessary. We are committed to each other by choice, and, while we have discussed it over the years, it just never suited us.

Getting married and having a wedding seem to overlap, and I think a lot of the time, people want the wedding, and the marriage is something that isn’t thought about as much in detail.

We put the details and thought into our relationship and have outlasted many of our married friends and peers.”

9. They don’t need their relationship validated.

“We get that weddings can be meaningful, but having an event all about us and making people spend money on us makes us feel a bit egotistical.

We don’t need people’s validation or society’s recognition to confirm our love and commitment to each other.”

8. They don’t see the benefit.

“Why should I get married? Almost every benefit you get from marriage, you can get if you set up documents (your will, power of attorney, or updating beneficiaries on accounts) that you should probably set up anyway to avoid probate or disputes with family.

If it’s for commitment, isn’t it more of a commitment to say that you trust someone so much that you don’t need a piece of paper to make them stay?

If you want to celebrate your love, you can do the party without the license, or you could bypass the overpriced party altogether and use that money for a house that you purchase with your partner, which is just as big of a commitment.

Being married doesn’t change how I love my partner, or the fact that I want my partner around, or how I miss him when he’s gone. Being in a relationship where we wake up every morning and choose every day to be together is good enough for me.”

“My partner and I both went through marriages before, both of which led to nasty divorces. You realize how involved the state and government are, and we weren’t comfortable with the legality behind it.

In the Middle Ages, if a couple uttered the words ‘I thee wed’ to each other, even without witnesses, it meant they were married. So, my partner and I are going up in the Pacific Northwest mountains in 2022 to utter vows to each other without family or friends. And that’s that!”

6. They’re comfortable with the way things are.

“I’ve been in a committed relationship for almost 12 years now, and we have a child. We talked early on about marriage, but it just never became something we really put much thought into. We get judged A LOT by conservative family members.

We even had a falling out with my partner’s father about it. He’s deeply Catholic and would say very hurtful things about us and our son. But now, I’m glad that we never did get married. I’ve seen sooo many of my friends and family stay in bad relationships with their married partners because it’s too expensive to get divorced.

We always discussed what we would do if we broke up and spoke honestly about our expectations if it didn’t/doesn’t work out. I’m comfortable, and so is he.”

“I’ve been with my significant other for 10 years.

We have a 7-year-old daughter and happily coparent our 10-year-old son with his other mom and dad (my ex-husband).

I’ve been married/divorced, and being married just isn’t a priority for either of us. We love our family dynamic and would rather put the time/money into making memories with our children.”

4. They’re uncomfortable with the institution.

“While I know marriage has come a long way, I just can’t forget the patriarchal origins of the institution. I think about the olden days, when women were forced to marry: because they were considered property, out of financial necessity due to the system men built, etc.

My partner and I have been in a committed relationship for five years, but whenever we’ve discussed marriage, part of me remembers all the women who came before me who would have given anything to hold onto their freedom and autonomy.

I am so happy for friends and family who’ve chosen to get married, but when I see the lingering traditions (like the father walking the daughter down the aisle and handing her to her new husband), it reminds me that this system was not originally created in the best interest of women.”

“We don’t want kids, and we set up our homeownership to be as easy as possible if we split up, so it didn’t seem necessary.”

“I’ve seen way too many women – by growing up in and out of foster care, in my family, and in my professional and personal lives – try and leave abusive relationships but weren’t able to do so because of the legal things that marriage brings.

We are committed and are building a life together, but he respects my wishes that we also have separate lives that include separate bank accounts, cars, insurance, etc. While I trust my partner now, I know that those who have been abused trusted their partner at one point.

After seeing so many women get stuck in marriages even when they wanted to try to leave, nope. Just nope.”

1. It costs too much money.

“Where I am from, less and less people are getting married. I’ve been with my boyfriend for 12 years now, and we do not plan to get married. Most of our friends aren’t either.

It wouldn’t change anything, other than having several thousand dollars less in our pocket. I know it’s possible to get married on a budget, but I just do not get the point.

I do not need a day where everything is about me/us to prove that we love each other. I have nothing against it, but it’s just not for us.”

All of these make total sense, and even if they didn’t, what’s it to me?

Have you ever made the conscious decision to not get married even though you also had no intention of breaking up? Tell us about it in the comments!