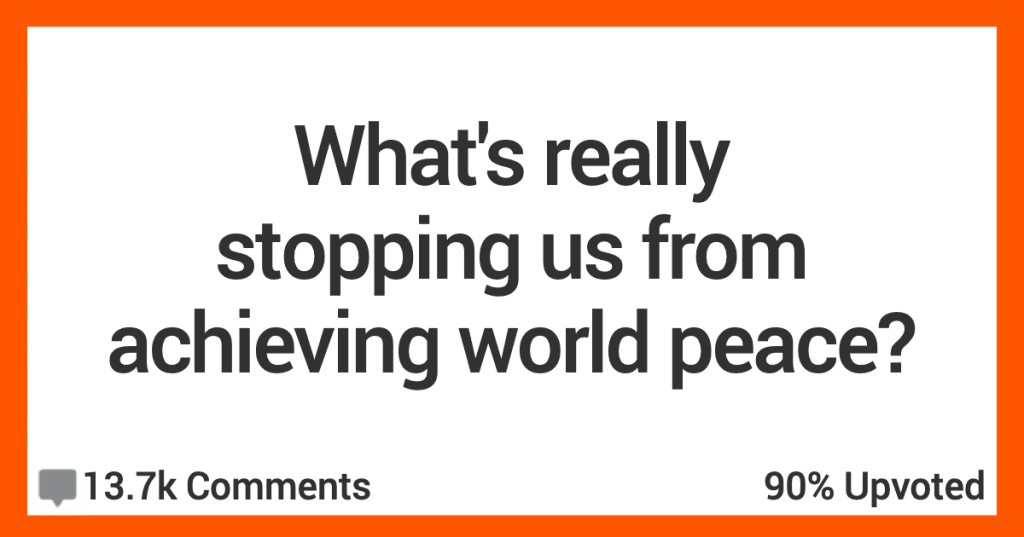 The whole concept of “world peace” has been a running joke for so long that I think we’ve all given up on it ever becoming a reality. I mean, one look at the news will convince most of us that we wouldn’t even know where to start.

These 15 people are casting aside their cynicism for today, though, and musing on what is actually preventing peace – and maybe figuring that out will somehow lead us down a better path.

The world is run by people who have no interest in peace or letting everyone else thrive.

We’ve created a system that elevates the most ruthless among us to the top and then celebrates their ruthlessness.

We’d all have to agree on what that means first.

I’m not saying there aren’t politicians arguing these things in bad faith, because there absolutely are. Still, almost everyone I talk to likes the concept of world peace, but many times, they think, “The people on the OTHER side should give up all of their claims on X. Naturally, our side is the most reasonable.”

Don’t forget Lust for Power. Positions of authority attract individuals whose primary motivations are in direct conflict with the needs of the general population. What else can we expect from people who think of themselves first; of course they treat others inhumanely.

I believe the author of divergent once said that a thing they learned when writing it was that the key to writing dystopia is to start from a perspective of creating a utopia and then decide what the perspective of your utopia is from those that are the outliers that don’t fit the system. Basically.

The reason that world peace is not achievable is that for many people he act of enforcing a level of required non discrimination and tolerance is a form of fascism. If you make it so everyone has to accept homosexuality as okay you are discriminating against those whose religion sees homosexuality as an affront o for that must be extinguished. As tolerance of the homosexual is in itself a sin against god. Thus forcing tolerance is something that is discriminatory against some religions as one example.

A utopia where no one is allowed to be discriminated against is a dystopia for anyone who believes that if one doesn’t discriminate their soul is damned. This can also apply to secular forms of discrimination as well

I really kind of chuckle when people say “in today’s world” or “the way things are today…”, as though things are any different than they’ve ever been.

There’s nothing new under the sun. Everything is the same as it’s always been, and people do the same dumb shit over and over again.

I start to laugh uncontrollably when people pretend as though decades past were some sort of utopia.

Especially in the case of what “sacrifices” must be made.

Is it worth mass surveillance to cripple crime? How about indoctrination? Media control?

Some days I wake up and truly believe that China could fix so many problems if they pulled a little harder. Other days I wake up and think that no government should have any say in anything a citizen does, including when it comes to disputes that end in heavy consequences such as death.

I legitimately can see the benefit to both sides and have no real opinion on it.

Still don’t know which side I will grow into. Pretty sure it’ll depend entirely on my next 8 months as I branch out from this god awful career path. Or maybe it won’t.

Greed being the main goal, stupidity and lack of empathy being enabling factors.

We love to focus on nuances and different specific behaviours, but we seem to overlook how fundamental greed is.

Corruption and most crimes? Greed. Lust for power? Greed is huge component of it. Economy? Greed. Look at 2008 – How could they let it happen?greed. Slave labour and worker exploitation? Greed. We could go on an on – there is no low points we are not ready to go to in the name of chasing that paper.

Interesting anecdote – so I was watching news a few weeks back. The chain of news was harrowing. Drying rivers in China, lakes drying out somewhere in America, wild fires in Spain, flood in Pakistan. All the good stuff.

To end the programme – they show a bold expedition of excited scientists from UK looking for lithium and other mineral deposits, and they are all excited how great it will be to access those. One excited surveyor goes “ it’s only possible thanks to recent melting of the ice caps in Greenland. ‘’ And the story was framed as this great positive because of the business impact.

The fact that as a species we don’t really believe in world peace. We say that we do but we don’t.

I could write a hate comment about big companies and politicians but we all do some or the other thing in our daily lives that takes us away from world peace. Even if it’s just subtle favouritism towards someone.

With large corporations and politics it just gets magnified. Discrimination and greed, both.

scarcity, whether real or perceived.

only justification for tribalism is that it secures resources to be allocated amongst the tribe.

even if we somehow eradicated propaganda that make people believe in false scarcity, we’d still have to deal with artificial scarcity that is propped up by corrupt governments/corporations, and then too remains the real deal of finity in nature.

post-scriptum : jeez. i never said it was the only cause, it’s not like i’m answering a five marks question that needs me to personally list out a paragraph of every single cause. i just mentioned one reason that was missing at the time that i read this post.

I’ll argue most people are pacifists by nature, but those who self-describe as pacifists tend to be more pro-apathy than they are pro-peace.

In a simple to understand scenario: teachers don’t like to deal with kids who rise up to their bullies because it causes them a lot of extra work and would rather that the kids shake hands right now and then. For the teacher, if the problem is not visible, the problem does not exist, therefore peace can be easily achieved by simply shaking hands. For the kid, this has happened often enough to think this will not be solved that way, therefore they prefer to eliminate the source of conflict entirely by standing up to them. Both methods are likely to bring peace, but one form of peace more likely to last.

So who is the real pacifist between the two, the teacher who considers themself a pacifists so long as they don’t get to deal with the problem in front of them, or the kid who solves the problem entirely?

4. Too much focus on money.

Idk it’s easy to say “everyone is so selfish and has no empathy” and this is true to a degree.

But the world is a very complex system – there will never be a solution where everyone can get what they want. And very likely some people getting what they want will mean others being deprived of what they want or need.

Humans will always prioritise the needs of themselves and their group (whether that’s their family, race, religion etc.) and there’s nothing inherently wrong with that. It just doesn’t work on such a large scale. At the scale human societies have grown to, it is impossible to avoid conflict.

That being said a lot of conflicts could be avoided if we started to prioritise well-being, peace and sustainability over money.

There is a widespread tendency for people to have a lack of empathy for those we cannot personally relate to or are far removed from our own personal lives.

It leads to racism, nationalism, tribalism, and tons of other unethical belief systems, eventually culminating in conflict.

We need more support for mental health and awareness to it. If you’re unhappy with your life, that isn’t normal! I thought it was normal to just be unhappy all the time and to live how I used to before. I wasn’t aware of any negative attributes of myself.

This selfish and self absorbed way of thinking would have continued on and on through generations without ever stopping, but I’m stopping it with me.

If you love yourself you’ll see all the love in others. I just wish others could see that too.

What is “world peace”?

How do you enforce it? With what stick?

Anyway, the answer is probably, ultimately, competition over finite resources.

(It isn’t because we are being held back by “some bad people”, we are all complicit, and you should definitely worry about the people who say they are not).

Yeah, I think many of these have valid points, but still no epiphany on how to make it happen.

What do you think is preventing us all from just getting along? If it’s not on this list, drop your ideas in the comments!