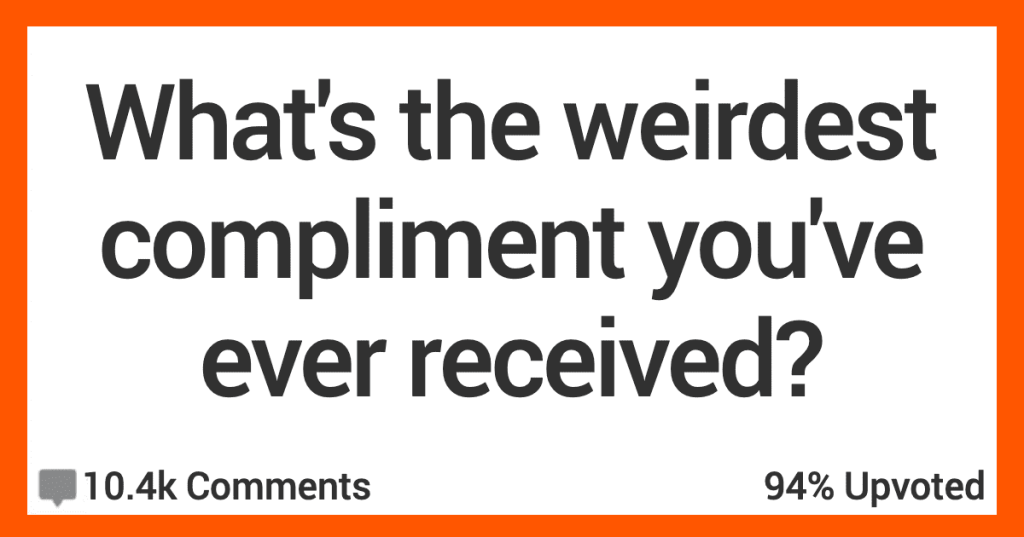 I’m referring to folks who dish out weird compliments.

And today we’re going to hear some weird ones that AskReddit users say were given to them.

“A random woman outside a café beside a train station, as I get chased by a wasp:

“You smell very sweet and spicy, that’s why he’s chasing you. Its very nice!”

“‘You have juicy veins, I’d love to take blood from them’.

From a friend who works in pathology.”

“I was told by a random lady walking past me in the mall that I had a really large, bright aura.

I looked at her kinda confused and she just said she was gifted that way and to have a nice day and kept walking.”

“I was at a pool party in college and I saw two girls that looked like they were talking about me.

Sadly I didn’t get either of their numbers but at least now I know that I have nice n**ples.”

““You look you’d be fun to take to Colorado” said a man to me, in a gas station.

He liked my choice of beer. I’m just broke and PBR isn’t that bad.”

“An ex once picked up my hand and told me I had “feminine, delicate wrists”.

Also “you’re so… unique looking!” multiple times during my life.

I am a white brunette lady, I am not unique looking, just not conventionally attractive.”

“I went to Mexico with a buddy about 10 years ago and we were drinking with a bunch of people.

Well another group of people were standing near us and kept looking over and whispering to eachother, staring at us until finally a few of them approached us.

The one guy looks at me and says “are your calves real?” I was like ughhhhh yeah.. they’re real, he turns to his friends and yells “they’re real!”

They all proceed to walk over and talk to us. A group of maybe 10 people complimented me on my calves, it was very weird.”

“From a coworker’s partner (a Japanese woman, speaking English): “You have a big eyelash. I am jealousy!”

As a man, I don’t get a lot of eyelash compliments.”

“When I was 17 during my first day of work, said by a female coworker: “”You’re so tall and skinny, you’d look great pregnant.””

“I once had an old Hispanic lady that didn’t speak English who I didn’t know have someone she was with come over to me at a restaurant and ask if she could bless my eyes for me.

She said she wanted to bless them so nothing would ever happen to them because she’d never seen anything like them.”

“One time a guy at the gym who was using an adjacent locker caught up to me on the way out to tell me I had nice feet. He said that he “notices things like that” and that I must take care of them.

I said thanks. He was nice. Never saw him again.

“My first child had been born a few weeks ago.

I came back to work and one of the bosses said, “Oh, congratulations on your….on your news…yeah…good luck with that.””

“I was late for school and decided not to shower so i could catch my bus in time.

I arrive to school say hello to a girl I barely knew, she comes up to me smells my sweaty shirt and says “D**n you smell really good”.

Yeah that was a creepy way to start the day.”

““I like your little hat” – a girl working the Whole Foods Checkout.

I was having a socially awkward day and she was a bit awkward too. I think she found something endearing in how I was being and felt compelled to say something nice to me.

It was just a basic wool hat/beanie for winter, not even that little. I still appreciated it and she was kinda cute.”

“I was the only one getting bitten by mosquitoes at a BBQ and a random man said “I’m not surprised. Your skin looks so soft I’d bite you”.

Have you ever received a weird compliment?