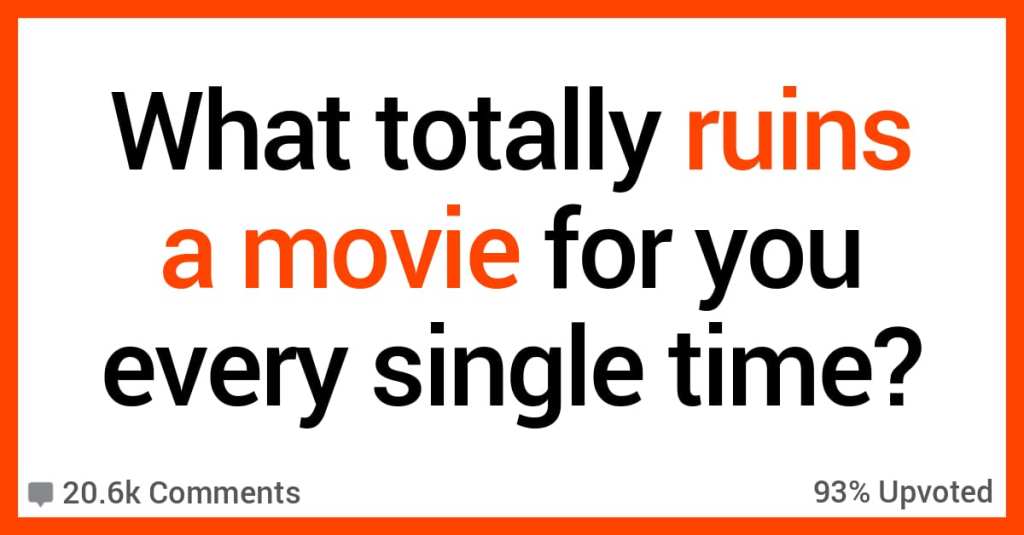 If you’re an avid movie watcher, there’s probably at least one thing that happens in films that really makes you mad and ruins the whole darn thing for you.

Mine is an unnecessary love story. If it doesn’t fit, just get rid of it!

Let’s see what ruins movies every time for AskReddit users out there.

“Fight scenes where someone make a big blow (usually the villain), but instead of finishing the deal by smashing the brains out they start talking, bragging or some other cocky sh*t.

And whoops, the fight is back on like nothing happened…”

“Having to constantly have my remote in hand to turn down the absurdly loud action scene, to then have to crank the volume for the next dialogue that is far too low.

“Added love story to an adaptation of a book with no love story.

Product placement itself doesn’t bother me. If there’s a character driving a Toyota, or eating a Pizza Hut pizza, I don’t care.

If there’s a pointless shot in the movie that shows the Bud Light logo for 10 seconds, I mind”

“Unnecessary love scenes where the main character and a side character fall in love just cause, despite having known each other for like five minutes.”

When the movie calls for an ugly girl, they get a s*xy girl and dress her in dumpy clothes.”

“When it’s very obvious when someone isn’t actually having a conversation on the phone.

They just say their lines without giving enough pause for the other person to respond.

I also hate when you’re supposed to be looking at security footage but it’s clearly just a previous shot that’s had a filter put over it.”

“The bit where hackers take 20 seconds of furious typing to disable a country’s infrastructure.”

“Action scenes with lots and lots of cuts, that make it obvious (or appear like) the actors can’t do the fight choreography.”

“When the premise for a major conflict in the movie is something that any sane person would have just said “oh no there’s a misunderstanding” and they all have a laugh and go on with their days…but instead it turns into some convoluted drama.

Roger Ebert called it The Idiot Plot, where a ten-second conversation would have eliminated the need for the movie.”

“When there is a timer and it takes longer to count down than the time that was called/shown. It drives me crazy.

Quick one-liner, bomb defused with one second to go.”

“When all you have to do is beat the boss and the entire army just collapses.

Pretty much every alien and robot-using invasion has this hive concept.”

“When there’s a 20+ year age gap between the leading actor and actress and it’s not addressed in the movie, especially when the movie pretends like they’re around the same age.

“We’re both experienced, leading scientists in our fields, even though I look like a grizzled war veteran and you’re fresh off the set of High School Musical.””

14. This person has some thoughts.

“I’ve got six things get me every time:

Motivation. The antagonist has to have a motivation that the audience can understand, and perhaps even sympathize with. The cardboard, “I’m a bad guy, because I like being bad and being bad is good – GRRRRR!” is so tiresome. I’ll even accept the “banality of evil” like your Adolph Eichmann’s, but the ones who make a display of relishing being bad? Not so much.

Violence without consequence. Sure, the good guy got beaten within an inch of his life, but the next day he’ll get up and mete out justice, where he would normally be looking at 3 months of PT/OT. I have friends who’ve been on the wrong end of a physical trauma. It’s not pretty.

War without consequence. War is brutal and ugly, and lots of people die in it. This should include multiple key characters in your movie. Not just the “we’ll give this guy screen time with the stars and he’ll be the one we kill off”. Saving Private Ryan was fantastic in this regard, because they were willing to kill off characters and you cared when they did.

Timing/monologuing. Nobody delays the start, middle, or end of a fight for a monologue. If someone is intent on killing someone, the moment that opportunity comes, they’re probably going to take it without launching into a 3 minute speech and give them time to rally.

Guns and gunfights that defy physics. The pistol that launches a guy 3 feet backwards when shot. The gun with a suppressor that makes a sound like a mouse farting from across the street. The guy who dies instantly from a gunshot to the chest. The gunfight in a confined space where everyone isn’t deafened at the conclusion.

“BASED ON A TRUE STORY” is so abused. There’s time when you have so much to tell that you have to abbreviate it or change the story to keep the key elements. HBO’s Chernobyl is an example where they had to consolidate multiple characters into Ulana Khomyuk, and that’s fine. But when there’s a tapestry of fiction to make the thread of truth interesting, I’m out.”

What ruins a movie for you every time?