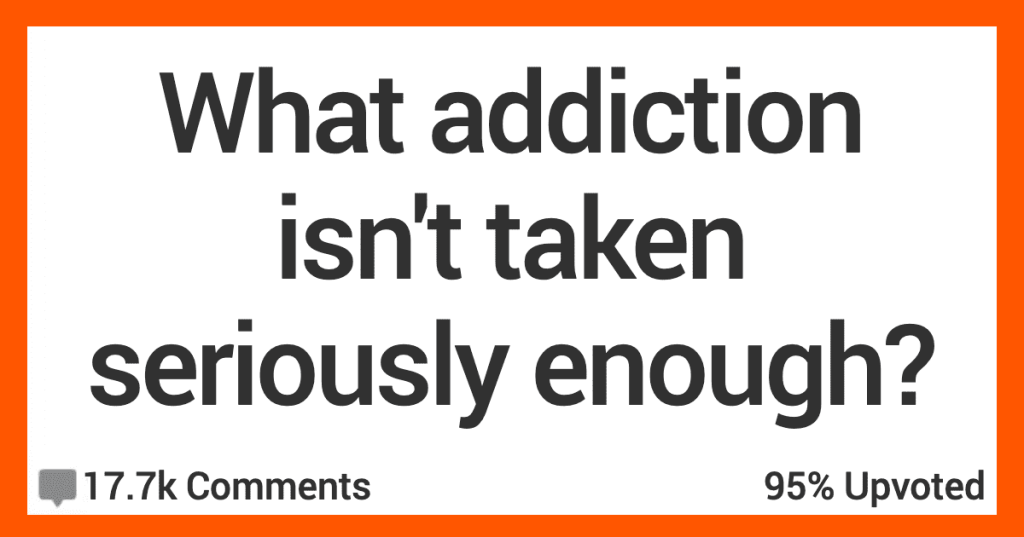 If you ask me, I think an addiction that people don’t take seriously enough is how much time people spend on their phones.

We’re all guilty of it to some degree, but if you go to a store or a restaurant or you just walk down the street, you’ll see that almost every person just has their head buried in their phone.

What happened to interacting with the world around us?!?!

And I have a feeling that this is gonna be bad for us in the long run.

What addiction do you think isn’t taken seriously enough?

Check out what AskReddit users said about this.

In worst case scenarios the person either becomes a hoarder due to all the stuff they accumulate and/or turns themselves into a debt slave by opening up 10+ credit cards and maxing them out to buy more stuff to get the dopamine hit.

Similar to al**holism, the person needs to want to change themselves, you can physically take their cards away and cut them up and admonish them or compasionatelly talk with them, but they have the card info saved on websites like amazon and its trivial to continue buying online without the physical card, or to order a replacement card or open up even more cards to continue putting themselves into the hole.

It can be a real compulsion for the buyer.”

2. Bring on the dopamine.

“In someone with ADHD, dopamine.

It’s easy to become addicted to social media, gaming, gambling, s**, attention, drugs, al**hol and all of the other addictions.

Because the real problem is you’re just trying to get access to a normal amount of dopamine.”

“Sleep aids like Zzz quil. I’ve always had sleeping issues. Turns out long term use can possibly bring on dementia and alzhimiers.

“The Food and Drug Administration (FDA) has found a connection between frequent and long-term use of drugs containing diphenhydramine and the risk of developing dementia, including Alzheimer’s disease, especially in older adults who abuse this medication.”

I’m horrified because Alzheimer’s runs in my family.”

Physician here: I love and h**e this answer because it’s not discerning enough. Steroid sprays like Flonase and nasacort as well as saline sprays are not addicting and may need to be used continuously for some severe allergy sufferers.

It’s the Afrin as most have pointed out that can really mess your nose up. Active ingredient Oxymetazoline. Definitely one I avoid at all costs.

I just wanted to clarify the difference for those who were curious.”

And it can manifest in so many ways – social media, causing issues in school, causing chaos, etc.”

It starts as just jokes to break the ice in social situations. Then it becomes a form of sarcasm ingrained into your everyday speech.

Then it becomes a true depiction of how you see yourself and it spirals into depression.”

“Man I don’t know why I’m so low on energy today. I think I need another Red Bull!”

I now need treatment for sugar.”

I forget why, but I didn’t have my phone for a bit the other day. I think the network was down so no calls or texts.

So many of my friends in their late 20’s work themselves to exhaustion, go out for drinks and talk about work for 3 hours, get called in early to work the next day, and kiss the boss’s a** on their days off.”

““Solitude is dangerous. It’s very addictive. It becomes a habit after you realise how peaceful and calm it is. It’s like you don’t want to deal with people anymore because they drain your energy.”

People only think being a full blown al**holic is an issue.

The millions who can’t go a day without booze, yet are functional and whose lives would be 10 times better without it are the real issue.”

My lips will never let me give up chapstick until I d**.”

Also the hardest to break as you can’t go cold turkey or abstain.”

My index, thumb and middle fingers are permanently destroyed and all my parent says is ‘you’ve got to stop’.