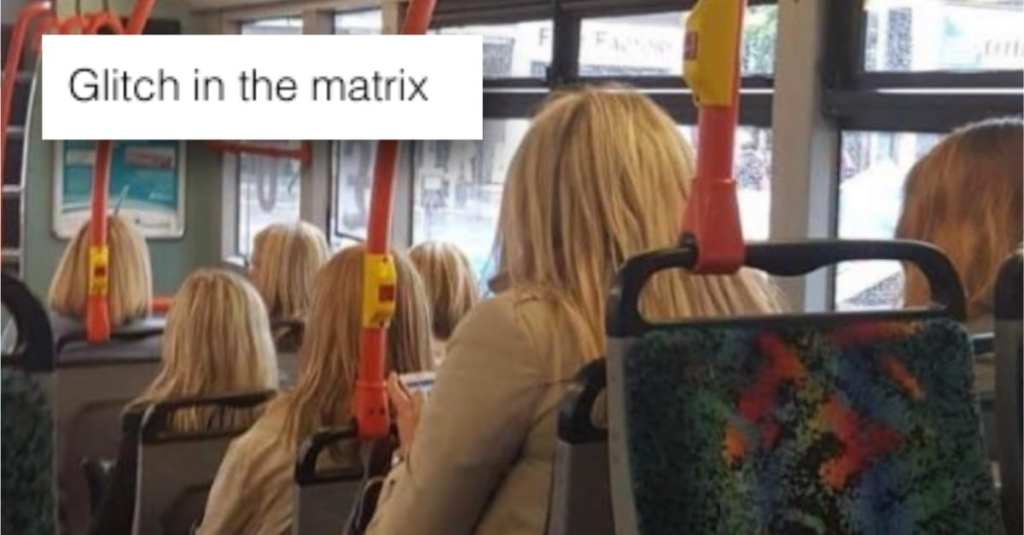 15 Times People Gathered Evidence of Glitches in The Matrix

Okay, so we don’t want to freak you out… but I think we’ve found legit evidence of The Matrix. Or, well, reddit has.

Listen, whether you notice it or not, there are glitches in The Matrix just about every day. Sometimes we just see them, but other times people actually get photographic evidence… and then share them with the world!

1. The invasion will commence shortly…

I, for one, welcome our alien overlords.

A bus full of Karens is called a Moving Argument. Thank you for listening to my Ted Talk.

Glitch in the matrix from nevertellmetheodds

The reflection off a skyscraper looks like the sky from GlitchInTheMatrix

4. What are the chances of that?

That’s not a glitch! That’s a feature!

My friend’s dad is at a Santa convention, for people who play Santa during Christmas. This is during breakfast at the hotel. from GlitchInTheMatrix

Look at the shadow. Now you see it…

I can’t… how does that even happen?!?

TV scene changed while photo was being taken from GlitchInTheMatrix

Haha… what a world.

A digital billboard in Odessa malfunctioned, in the fog. Convincing unknown numbers of motorists not only were they living in the Matrix, but it was being run on Windows 98. pic.twitter.com/a5O0Yoj0Lu

Because I can’t figure it out.

I… Just… Don’t… Know……. from GlitchInTheMatrix

Alright, this one is pretty easy to explain, but it LOOKS cool.

When you decrease shadow resolution… from GlitchInTheMatrix

OMFG… stop the floor from moving or I might fall off!

This floor looks like it’s glitching out from mildlyinteresting

14. Need the backstory on this one.

Ermmm…. are we growing humans now?

A man that seems to be glitched into the ground. from mildlyinteresting

Took a picture on snapchat & the photo glitched out and now it looks like my cat is looking at my dog from Heaven. from mildlyinteresting

If you’ve had this happen to you, share some pics in the comments. Let’s get even weirder!