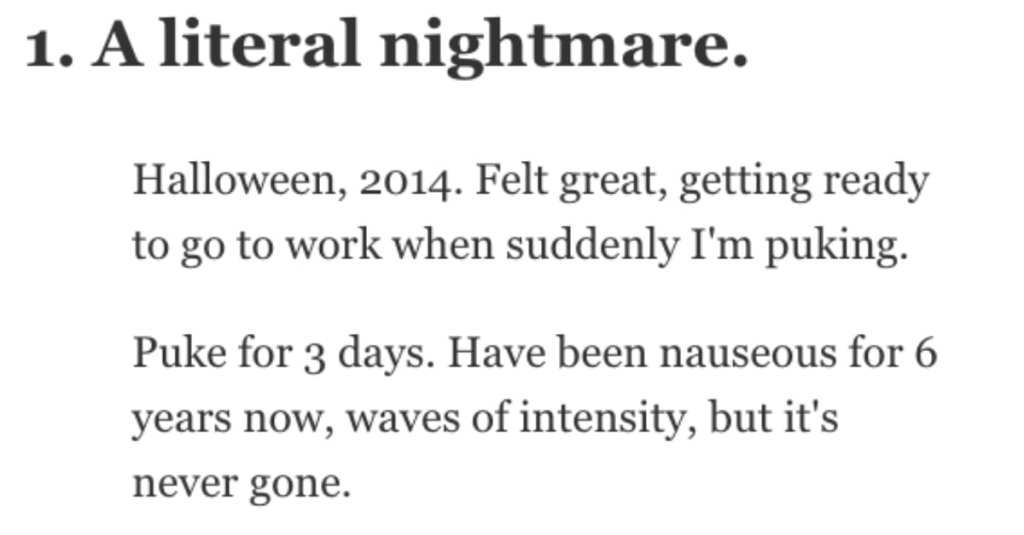 15 People Recall a Moment When Their Body Betrayed Them

If you live long enough, your body will always betray you. It’s just not made to hold up against the march of time, or, you know, against extreme scrutiny or like, embarrassment for days on end.

Chances are you remember a few times your body had the wrong idea, and these 15 people definitely have experienced some doozies!

A few weeks ago, I noticed that getting up in the middle of the night to pee is a nightly occurrence.

Since then, I’ve tried limiting my water consumption 30 minutes before bed, then an hour, now an hour and a half.

I STILL get up in the middle of the night to pee no matter what.

14. Those things are all defective.

I discovered at 19 that I have a gene mutation that causes random melanoma tumors in my body.

At 21, I learned I am a literal mutant, but instead of it giving me cool super powers, my body develops tumors.

12. Food allergies are so scary!

Mid way through a lobster dinner, when it decided I should now be allergic to shellfish.

11. The wrong sort of miracle.

I was just shy of 21 when I discovered I have a disease I shouldn’t be able to have.

My bone marrow is calcifying and making my spleen and liver a bit too big.

It really sucks getting news like that so young. How are you these days?

10. I hate to think about this happening.

I love cats. I cannot have a cat anymore.

And now I’m starting to get allergic to my dog that I love with all my heart.

It sucks, but I put up with it.

A year ago I had a slight head cold and flew home for Christmas.

My ear was clogged and wouldn’t pop.

I landed and still couldn’t get it to pop. 3 specialist visits later, they’re like “yeah something is messed up but we don’t know how to fix it”.

Living with an ear that won’t pop is a special kind of hell.

I can do neti pots or have a great yawn where it will be clear for a couple seconds but then it just closes again.

At 25 years old, I had my first ever seizure. It was a 10 minute grand mal seizure, in a restaurant, no less. Almost 14 years later, numerous med combos, dozens of seizures, side effects, and a brain surgery later, no answers.

It sucks to know there is no cure, side effects are monstrous, and people don’t understand bc you don’t “look sick,” but after they hear the words epilepsy or seizure disorder- let me tell you, you’ve never seen people run so fast.

However, I am currently 23 months seizure free on my current med combo. I have maintained my career successfully over the last 16 years and I am going back for my second masters degree program in January.

Earlier this week, I subluxated my left shoulder and my left hip. On different instances.

When I used to do a lot of long distance cycling I would do some leg training in the winter so I’m ready by spring.

Well, one time after doing a workout, I couldn’t get up from the toilet.

It was pretty bad.

A few months before turning 24, woke up blind on one eye.

Turns out i have multiple sclerosis.

2. All of the delicious foods.

I loved eating apples, pears, and cherries until I became allergic at age 22 – mild symptoms including an itchy throat means it is no longer worth the taste.

Halloween, 2014. Felt great, getting ready to go to work when suddenly I’m puking.

Puke for 3 days. Have been nauseous for 6 years now, waves of intensity, but it’s never gone.

About 4x a year, I have 3 day long puke fests. Randomly throw up, too. Wear a transdermal patch and a reliefband all day, every day, to be minimally functional. Survive on ginger ale (I don’t even like ginger ale.)

Oh, and my body won’t tell the doctors what the hell is wrong with me, so no diagnosis. On the plus side, if you need some tricks for calming down nausea, please ask, I know them all.

Man, not looking forward to the next time this happens to me.

Tell us in the comments about a time this happened to you!