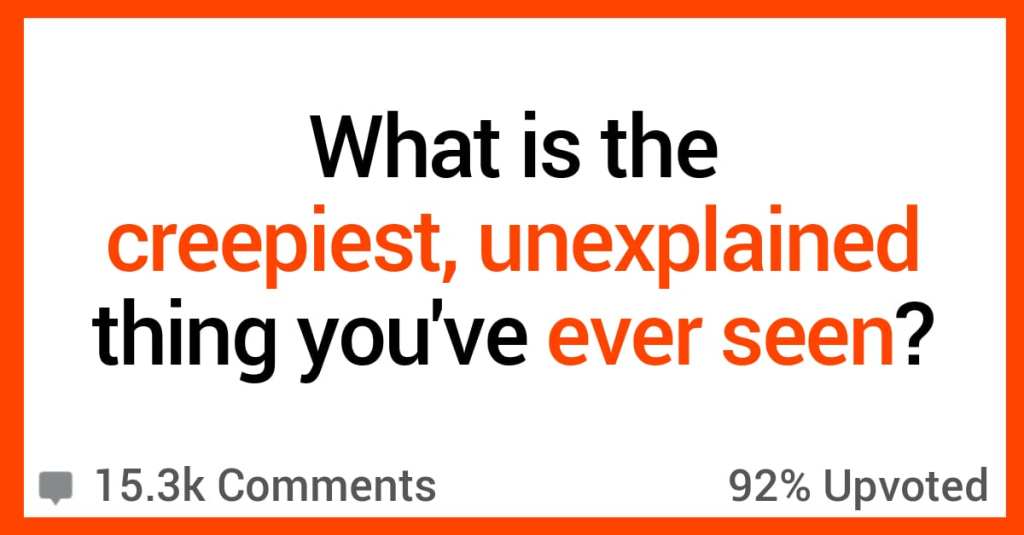 If you’re someone who grew up in the age of the internet, there’s a good chance you’ve been accidentally scarred by something you came across on accident.

YouTube is a minefield, as are many of the games played by minors, so if you’ve escaped it, I think you’re just lucky.

If you grew up before the age of the internet, you’ve probably also been scarred by something you’ve seen online, but at least you’re mature enough to handle it. In theory.

So don’t feel alone – these 16 people are here to let you know you’re always in excellent company when it comes to extremely creepy sh%t.

this happened last month, i was watching random stuff on youtube when suddenly i started listening 2 guys talking with a calm music in the background, one of the guys had a strong russian accent, they seemed to be playing something,.

I thought it was some YouTube video i opened but it wasn’t, i started to close everything until there everything was closed, there was only steam opened but i wasn’t in any voice-chat or anything and no media was playing (like stream or anything like that), it seemed to be some private call i got in.

So i closed steam and the 2 guys talking stopped, so i guess somehow i got into a random steam private voice call.

15. I guess that’s a thing that happened.

Years ago in a similar post on Reddit someone shared a website of this mentally ill, homeless woman, formerly an engineer or dev, who lived in a tent in the woods that she had hidden. She had access to electricity and the internet. She had her own website and I believe even posted on Reddit.

On her website she’d write about her s^x life and all the crazy sh%t she’d done. I think the worst was when she willingly became the sex slave of some man, at some point he tied her up in his basement, and that man would invite his friends to come over to r*pe her. Eventually word gets around town and all sorts of men show up, even some teenage boys.

One thing I distinctly remember is she hated having her partners speak during s^x. She posted a satellite photo of where her tent was and said if anyone could find her tent, they were welcome to come inside and f*ck her but they couldn’t say anything to her while they did it.

Crazy stuff – anyone remember this?

14. Depends on your definition of lucky.

I remember back in the day you could type in “Meet Chad” or something like that in the google search bar and then hit the ‘I’m feeling lucky’ button.

It would immediately bring up a page with a dude covered in poop.

I didn’t come across it, but once when I was around 15 someone hacked into my computer. This is 100% true and i tell it as a cautionary tale often. I had a ftp file server at the time because I was in a long distance relationship and we would send stuff to each other via the file server. One day I noticed someone had downloaded all of my photos from the server. I called my boyfriend and asked him why he was downloading stuff he already had. He swore it wasn’t him.

I ignored it until several days later a screen opened on my desk top that was a window for my webcam and was on with me on the screen, and a chat window opened. The person told me that if I didn’t take all my clothes off they would use my mom and dads credit cards to buy all sorts of things. Luckily my parents were super cautious of using their credit cards on the internet (this was like 2002) so I knew he didn’t have their card #’s. He had used the ftp server to upload this chat/video program, and who knows how long they had been watching me.

I freaked out. I unplugged my computer and unplugged it from the internet and didn’t turn it back on until I was prepared with fancy firewalls and security for the ftp server. I tried calling to police and my internet provider but no one could help me. And thats how I learned hundreds of ip addresses and what they were, I watched my firewall like a hawk. I never heard from the hacker again, but it sure scared the shit out of me. Now I cover my webcams.

used to download movies using one of those illegal apps. I was a teenager, about 16? Perverts LOVED to title hardcore, illegal po*n Disney titles. You never knew what you were going to get. Sometimes you’d get disney movies, sometimes you’d get edits with Disney intros and title cards, then it would cut into po*n.

I’ll never forget the time I downloaded Goofy Movie and it was… a horse. And a woman. It was awful. I remember I cried and deleted it immediately. I didnt tell anyone (you wouldn’t download a car) and for months I expected the FBI to show up and arrest me.

Long ago I was working laptop tech support and I specialized in wireless issues. This was the early days of 802.11b.

He explains, “When I came home there was a document printed out on my printer saying I really needed to setup wireless security.”

So yeah, we got him setup with WEP, heh.

When I was a kid (10-11yo) and I was taking my first baby steps looking for p*rn, I found a p*rn website with bunch of women who were all missing their arms and legs.

It was somewhat jarring that there were so many and I started wondering what had happened to them and if whoever was filming the stuff had taken their limbs.

Haha, kids be kids (… Unless?) It was probably an amputation fetish website or something.

9. Some Amazon employee has a dark sense of humor.

A few days after we got an Alexa my wife and I were playing around by asking it random questions to see what she’d say.

We asked her “to tell us a story”.

Without missing a beat she said “there is a disfigured child in the basement calling for help”.

8. That’s what happens when you invite robots into your room.

Ask alexa “who is listening to me right now”. It gives a range of really weird responses including one really long monologue about “The listeners” and why they listen.

You can also ask why alexa is recording you. It will sometimes give long monologues about the greater good and a need for monitoring. Other times it just responds that its not recording.

these are just some of the prerecorded answer options alexa has. If on the first try you don’t get it as an answer you will eventually if you keep asking. If you want to hear the listeners answer off the bat ask Alexa “Who are the listeners” I just tried it with my alexa and she gives the monologue upon first question.

6. I hate that this exists.

Unfortunately I was on the receiving end of those body dysmorphia type of tumblr posts at a sensitive time of my life, and fell into that rabbit hole for a year or so. Looking back on it, those posts were a lot more f*cked up than I realized.

The romanticization of anorexia is jarring to say the least, especially to anyone who was impressionable towards that stuff. Real fucked up shit. Worst part was just how healthy most posts were made to look, not healthy in a weight sense of course, but they were almost most definitely photoshopped to make it seem like anorexia brought flush, flawless skin, beautiful hair, and an overall healthy demeanor.

In reality, none of that is possible nor comes from that, it was just so romanticized and almost sexualized, showing as much skin as possible and making it look like it was beautiful or something.

It was disgusting, and I can’t imagine the amount of people who fell into that hole worse than I did and I hope they are healthy now.

5. The government came for them.

There was a sub about methods of switching universes in the multiverse. The sub had a number in the sidebar and people would swear that they successfully switched universes because the number was different or a partner has a scar they didn’t before, stuff like that.

Anyway it just stopped, no word as to why, no nothing. Everyone just stopped posting and commenting all of a sudden.

Sadly I can not for the life of me remember the name of the sub.

When I was around 13, I randomly came across a video on Facebook (shared by a FB friend) of a woman being decapitated. It was two men and the woman plus someone holding a camera.

They explained that she wronged their gang in some way (I don’t remember those details) and one man proceeded. I couldn’t click away I was so frozen in shock. I saw the whole thing. Her image is burned into my brain for life.

When I see similar graphic scenes in movies or shows like GOT I always picture her. May she R.I.P.

As a teenager looking for p*rn I stumbled across a website which looked like one of those live cam sites, but then I noticed most of the people weren’t engaging with the audience, and they were all kinds of people. Old people, kids, people of all different ages, ethnicities and whatnot.

I clicked on a random livestream of some oblivious teenager doing her homework and the people in the comments were saying stuff that made me realize she didn’t know she was being livestreamed, nor did anyone else on the site.

It seemed to be some weird website of hacked webcams or security cameras where the people had no idea about it. It was creepy as fuck and I’ve never kept my webcam pointed at me when not in use since.

My girlfriend at the time texted me a link to a local news article involving a trial taking place that day. At the top of the article was a picture of my girlfriend sitting in the courtroom.

I expressed surprise since she hadn’t mentioned going to court. She definitely would have told me, and then in anticipation of it, asked me a bunch of questions, as I am in the legal field.

She responded, “that’s not me.”

We never did find out who it was.

My niece was having trouble sleeping and kept telling her parents that she was hearing voices but she’s an inarticulate toddler so they didn’t totally understand.

Eventually they figured out her baby monitor was hacked and people were talking to her through it.

I am so glad all of a sudden for my solid spot in the Xennial generation. Yikes.