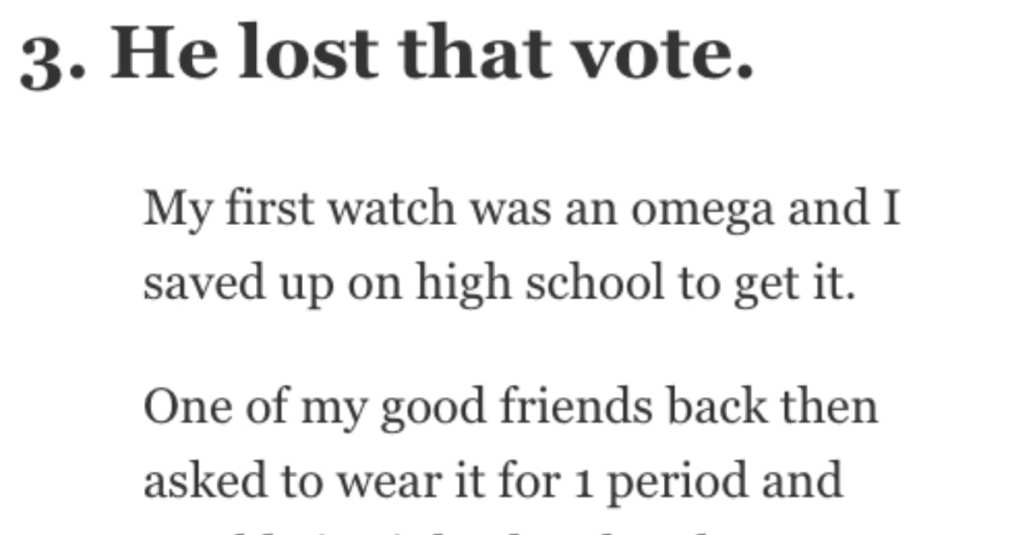 Lies are funny things. We all tell them, we all hear them, and while some people are better at picking them out than others, I think we all like to believe that we know when we’re being hoodwinked.

But while sometimes it can be tough to know for sure, these 16 lies were way too obvious to miss.

My little girl told everyone in the supermarket that our cat died and she was sad.

When a coworker told my own story back to me as his own.

In 5th grade, a friend of ours used to try to convince us he used to hangout with the band Sublime.

Among other stuff, he said the he was the person featured on the cover of their self-titled album and he used to do drugs with them and even tried heroin once.

We were fucking 11 years old and he claimed this all happened two years before he even moved to our school. So yeah, a fucking nine year old did all this wild s**t.

We constantly called bulls**t but he would just continue to lie and make up more stuff.

We stopped hanging out with him because he was so full of s**t.

I speak French, though I’m losing it from lack of use. But one of my college guy friends started dating a girl “from France.” He was all excited because she could talk to me in her native language and I could help translate. So he brought her to a party at my sorority house and introduced us.

I greeted her in French with a very simple, “bonjour, bienvenue, comment ça va” which is just hi, welcome, how are you.

Blank stare and red face in response. She then said, in what I thought was a kind of strange accent, that she’s sorry, she didn’t understand me. I looked at the guy and said “I thought you told me she was French?” Because maybe she was a different nationality and he was confused.

He looked at her and she just turned and left. He followed then returned a bit later and said he had caught up to her and she started screaming at him in perfect Midwestern accented English that he was a jerk for setting her up to look like a fool.

He had genuinely been excited that he could introduce her to someone she could talk to so he was blown away by her accusations and then angry that she lied. She apparently felt faking an accent would make her more appealing or something.

I would see her around on campus after that but she avoided me like the plague. TBH, I felt bad for her, but if you’re going to fake it, at least pick a country with a language you can speak.

12. Maybe he was from an alternate universe.

In the early 90’s I was at work making $5/hour, and a co-worker looked me straight in The eye and said he had bought a surface to air missile from China and kept it stored at him moms house in a different city.

Wtf dude? That’s not even close to believable.

When I was a kid, the internet wasn’t a thing so, my friends were whoever happened to live in the neighborhood. One kid was a well known liar and exaggerator. We were maybe 14 years old at this time.

This kid could play guitar and was always talking himself up about it and talking about “his band.” He actually could play, but “his band” did not exist.

One day, I called him at his house, from my house. I don’t remember what it was about, but a few minutes into the conversation, told me, “by the way, I’m in Florida with my band”, just out of the blue. This was before even pagers were a common thing. I called him. At his house.

I just said something like , “uh huh. Ok.” and ended the conversation. I then proceeded to tell all the other kids in the neighborhood.

10. Everyone believed that was a lie.

My mom after 11-year-old me accidentally destroyed her favourite vase by throwing my brothers stuffed animals around the living room: I’m not mad.

9. Talk about digging your own grave.

When I was a public defender my dips**t client called up his victim from the jail phone the night before his trial. He said kill repeatedly in an attempt to intimidate her.

When I was telling him how stupid this was his excuse was that he was watching Kill Bill and someone changed the channel on the cell block communal TV. That dumbass is now doing 28 years in prison.

8. We’re all a little skeptical.

I used to work with a guy that was a serial liar. Couldn’t tell the truth if his life depended on it.

So many lies, but this is my personal fave:

background –
Keep in mind that at the NFL combine the 40 yard dash is the standard for speed. 4.5 seconds is great. 4.4 is elite. And the fastest time ever recorded – by a prospect is, I believe 4.24 seconds.

This yutz I worked with claimed that back in his army days, he ran a 4.2 flat – in combat boots.

I dated a girl who was a pathological liar. I didn’t know it was actually a thing, when my dad originally told me about it I thought he was exaggerating. After leaving the relationship I realized how ridiculous the lies were and how stupid I was for believing them but I guess that saying “blinded by love” is also true.

One time she called out of work because according to her, she was on her parents boat out in the ocean and the boat ran out of gas, so they had to call a friend to come rescue her and her family and tow them to shore. I found out later it was actually because she had a party and was wasted.

She met Donald Trump (this was back in like 2013) and his associates in Atlantic City. They invited her and her friend to join them as they drove around Atlantic City visiting his casino and eating the best food and drinking top shelf drinks. She didn’t have to pay for anything.

She got mono when we were dating, but I was fine. She said it was “anxiety induced mono” according to the doctor which is why I didn’t have it. This was around the same time she told me that she met some guy at a party that was hitting on her but “she didn’t hook up with him” and then I found out a week later she did.

She was previously engaged, but she called off the engagement (this is actually true) and went to the pawn shop to pawn off her engagement ring and used the money to buy alcohol.

She totaled three cars in her lifetime, but she was able to convince the insurance company it wasn’t her fault and basically got a free car replacement each time.

6. With a straight face.

When my friend was an infant, her mother put her 2-year-old sibling in her crib while the mom left the room briefly. When mom came back, my friend was crying and had teeth marks on her forehead.

When mom asked the older sibling what happened, she calmly said, “She bit herself.”

5. She’s sticking to that story.

“I did not feed your dog any human food” – my mom, while my dog pukes and s**ts all over my house.

4. Lying about cancer is a new low.

Used to have a friend that spewed bulls**t all the time. Told me her bio parents, who live together, were divorced and seeing other people, and also that she had 25 siblings.

Brought it up to her mom one time, which was an interesting conversation. She also told us she had cancer, and then a week later it was miraculously cured.

My first watch was an omega and I saved up on high school to get it.

One of my good friends back then asked to wear it for 1 period and would give it back at lunch.

He begged and begged so as a hs kid I gave in or couldn’t keep saying no I guess, weak on me, obviously. Well, He smashed it (apparently smashed the glass to test it) gave it back and said it was a fake and that’s why the glass cracked and said he didn’t do it and it just fell apart.

A$shole became a medical doctor and is now involved in politics and holds state office. I’m still pissed about the watch he never admitted he broke cuz he was salty and jealous. D*ckhead then, d*ckhead now.

I have a family member who did the cancer thing. A cousin found out it was a lie. But the one that I’ll never forget was when I introduced her to my friend who has lupus.

1. Doesn’t everyone lie about working out?

My friend told me that getting a Peloton changed her life. I looked up her workout stats & she had used it 4 times in 5 months of owning it. Her husband fared a little better with using it 9 times.

Don’t know why this annoyed me so much.

People really have a lot of confidence, don’t they?

What’s the most obvious lie you’ve ever been told? Share it with us in the comments!