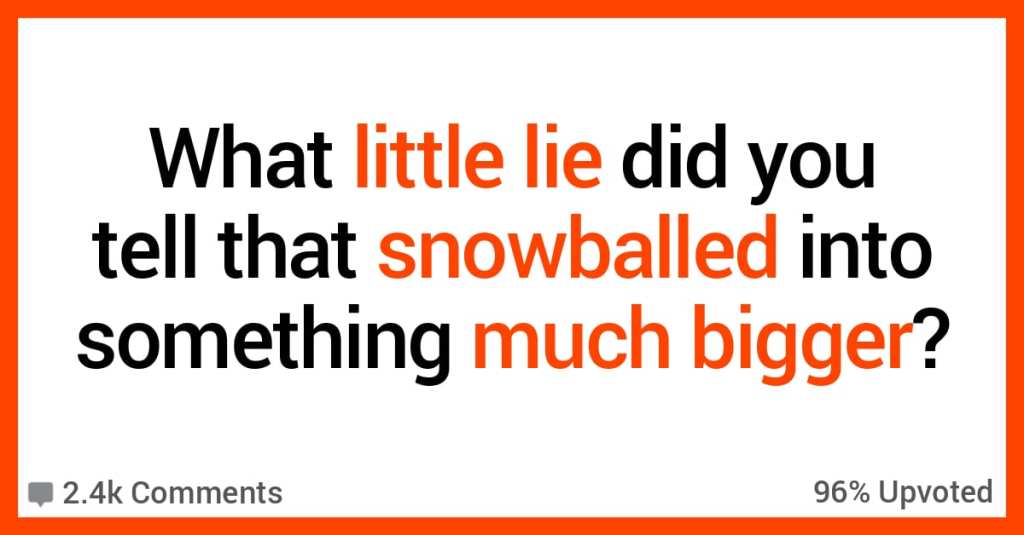 Tell me if you’ve ever had this happen to you before: you tell a lie, a little white lie, that fib catches on, and then, before you know it, the whole thing has spread like wildfire and taken on a life of its own.

And then the situation spirals out of control!

Yes, it happens from time to time, even to the best of us.

Are you ready to hear some interesting tales?

Let’s check out some stories from AskReddit users.

“Young co-worker and his sister would play practical jokes on each other.

She put an exploding “cigarette load” in one of his cigarettes.

He discovered it, stopped by drugstore on way home and bought an eyepatch. Went to a bar to kill some time, called home and told mom cig exploded and he was at emergency.

Unknown to him, sis confesses to mom, mom slaps her upside head and much tears and sadness and anger all around.

Much sympathy and apologies and crying, even nearby relatives had come to house to berate sister.

Co-worker has to wear eye patch for six weeks, never ‘fessed up.”

“I can’t go to your party because I’m feeling sick tonight.

A few hour later, my friends are knocking at my door with chicken soup when all I wanted was a quiet evening to read and mast*rbate.”

“Okay so I was trying to get my lying calibration with a budding drug addiction in early adolescence and figuring out when to hold/when to fold. Like, when do you make sh*t up and when do you lie by omission, right?

So one night I come home and just book it past my parents because I am far too high to deal with them. I have cinnabar eyes and sniffles, its a bit much. Last time of “say nothing” erupted so I just made something up quick so I could go to my room without being bothered.

When asked “Why are your eyes so red?” I blurted out with 0 thought “SETH’S SISTER HAS CANCER!” and kept sniffling then shut the door.

Seth is an only child. This story had to evolve with his assistance every time I saw him. I made him participate.

Mom asked me about “Rebecca” regularly for like, a decade.

Im 13 years clean in October. Theres this whole thing about making amends unless to do so would injure them or others, and since mom would murder Seth for going along with it, I have said nothing. She hasn’t asked about it in maybe 5 years so I don’t feel as bad anymore.

I’m an awful person, but for what its worth, Rebecca is in remission now and has a beautiful family.”

“I was a little devil. So my family from my mother’s side is Mexican. All of my cousins are blonde and/or very, very light-skinned including myself.

I went to stay there for a summer when I was around 6-7 and my cousins and I spent a full day at a nearby pool with a bunch of other kids. I was used to bringing sun screen in my back pack, but my cousins didn’t even think about it since no one else was using sunscreen.

As the day ended most of the other kids were okay, maybe just a little more tanned. My cousins had major sunburns and were crying. One of them asked how come I was fine. Instead of showing them my sunscreen and aloe vera lotion I told them I used the same thing we used for mosquito bites-lemon. Yes, they tried it.

It resulted in 6 kids full of blisters and no birthday party for me that year. After my first real sunburn I realize how much of a monster I am.”

“I was 13 and I used to have a paper round and I couldn’t be bothered to deliver one evening.

So I decided to dump them and told the paper shop owner that I had my delivery bag stolen from me when I went to start my route.

They then asked me a few questions and then the police got involved and even went round in the police car to where it “happened” and if I knew who did it.”

“My academic department had a booth at a comic con for recruitment and research. A guy was cosplaying as George RR Martin (writer of Game of Thrones).

He looked a lot like George RR Martin, was wearing the signature black hat and carrying a copy of one of the books. We had him sit at our booth for photos as a joke.

If George RR Martin signed your book at Tampa Bay Comic Con, I have bad news for you.”

“I told a girl I had a gf after she messaged me saying she wanted to hookup, and she then threatened to kill herself and take me with her, along with threatening my “gf”.

I alerted my school, and they sent a social worker to talk to her. fast forward a few weeks I had to change classes, deactivated my Instagram, and almost filed a restraining order. At the time, I was a sophomore and she was a senior.

Worst experience of my life.”

“Called out sick from work then a few hours later I got pulled over for speeding right across the street from the plaza where I work.

Needless to say all my coworkers saw it.”

“Called in to work just wanting a day off after a month of blackout days.

Said I feeling sick and next thing I know I’m filling out a “Self Report” for Covid-19 with a full week off work, signing up for a Covid test the next day, and having to explain to people why I’m home when I’m usually not.

All in all it turned out nice because I really enjoyed that week off, but I wasn’t expecting all the extras that came with.”

“I was driving somewhere with my friend’s fiancee. Up ahead I could see a dead skunk on the side of the road so I switched the AC from vent to recycle.

She looked at me confused and asked why I did that. I lied for the fun of it and said we were in kind of a marshy area with lots of bugs and I didn’t want them to get into the car through the vent.

Flash forward 10 years and I’m driving somewhere with my friend’s wife and she reaches over and switches the AC from vent to recycle. I ask her why and she explains there are a lot of bugs in the area and she doesn’t want them getting into the car. I’m about to educate her that that isn’t how it works and then suddenly I remember… oh… so I just leave it alone.

Flash forward 10 more years and I’m driving somewhere with my friend’s teenage daughter and she reaches over and switches the AC from vent to recycle… uh-oh.”

“I worked at a rather large medical facility with a staff of several thousand, in a position that had contact with pretty much everybody in every department.

I had a coworker named Jim, and one night I was talking to some random nurse, and she referred to him as James. I asked who James was, and she said you know, Jim? He’s on your shift? I laughed and said, “His name isn’t James, it’s Jimothy.”

That spread like wildfire, that this poor bastard’s real name was Jimothy. This was probably 2003. I left that job in 2010. I’ve been assured by many people, including Jimothy himself, that the majority of the staff actually believe his name is Jimothy.

And this has been passed down to new employees in the oral tradition.”

“I was backpacking Australia by myself for several months.

At some point I realized that telling people it’s my birthday is an instant ice breaker and great way to make quick friends/drinking buddies. It worked great in several cities and was fairly harmless… For a while.

I took an overnight bus to a new city and my hostel was supposed to pick me up at the bus station, but they weren’t there when I arrived. I called them to confirm they were on the way. When they finally showed up, apologizing profusely, I said something like, “no worries. I’m just exhausted from the bus journey and it’s my birthday tomorrow”

Well… They upgraded my stay (from a bunk bed to a queen bed), gave me a free dinner and paid for my club crawl pass for that evening. I immediately felt guilty but was way past the point of no return.

I made fast friends with other people at the hostel and we all piled into a bus for the club crawl. After a bit, people started pulling out their passports to compare horrible passport photos.

I knew that the birthdate listed on my passport was not the current date we were celebrating my “birthday” so I decided to be proactive and head it off at the pass.

I told them that my father worked for the government but I didn’t know specifically what his job was. And a few years back, my entire family had to move and change all our details on our passports. Our last name spelling was changed, birthdate, etc. Everybody believed me, and they were gutted that we couldn’t announce to the bouncers that it was my birthday.

We walked in to the club and I came face to face with a group of guys I’d met at a different city a week ago… Who I’d also told it was my birthday, a week ago. I just breezed past that detail by saying it’s my birth week.

Anyway, it was a fun night out, nobody suspected me for a filthy liar and it was probably my favorite spot in Australia.”

“Something funny rather than negative happened a while back.

I lied by adding I speak a third language fluently, that’s ‘Tamil’ on my CV (my country’s two main languages are Sinhala and Tamil). My work colleagues thought I was cool for being trilingual and made me teach them to swear in both languages. The third language had poorly pronounced words but I was enjoying the attention.

Eventually, there was a big chance to secure a deal with a client who spoke Tamil. My boss specifically brought me to the trip and introduced us and jokingly said ‘now talk in Tamil!’.

I thought I was f*cked and decided to speak in my second native language (Sinhala), thinking confidence can sell, right? The bugger spoke back to me in Sinhala! I explained the lie to him. Luckily it went well and we both laughed it off in front of my boss.

Well, don’t keep the story to yourself! Tell us about it in the comments.