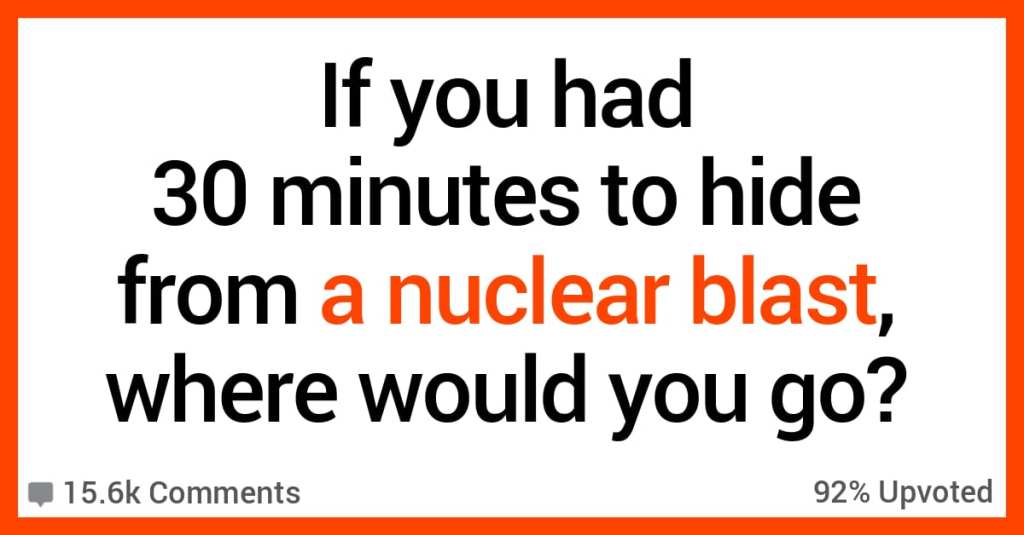 If You Had 30 Minutes to Hide From a Nuclear Blast Where Would You Go? Here’s What People Said.

Well, this sure isn’t the most pleasant question you’ve ever been asked, but we still want to know what people would say, right?

And, hopefully (fingers crossed), we’ll never have to actually worry about this, but we’re gonna dive in!

If you had 30 minutes to hide from a nuclear blast, where would you go?

Unless it turns into Stephen King’s “The Stand”…”

“I’d always heard a basement of a library is good because books may absorb some radiation.”

“I work at a nuclear pharmacy which has dosimeters, geiger counters, potassium iodide tablets, Radiac spray, PPE and lead, and the break room/office is an extra vault that was made to house a particle accelerator (known as a cyclotron).

I’m at work right now. So, assuming I’m safe from the initial blast radius, I’d probably go sit at my desk, scroll through Reddit and watch the world end.”

“The nearest city is over 30 miles away, and it’s all open country from where I am and for at least another 10 miles to the mountains in the other direction.

Either I’d jump in the truck and try to make it to the mountains thru the reservation or crawl under the house and hope for the best.”

“There is an old building near me that has a basement. I know what boards to move to get into the basement from the outside.

It’s the only building I know of within about 100 miles that is entirely reinforced brick masonry with a basement, and I’m sure I’d spend the apocalyptic event chatting with several homeless people who also know about the board.

We’d all survive though.”

“Pretty easy, I would just go to my nearest bomb shelter. They are all over the place here in Finland and can house up to 4 million people (so more than enough room for the entire urban population) .

Every metro station also doubles as a bomb shelter, and I can walk to one of those within 10 minutes so I would probably chill there (there are probably a bunch of shelters even closer to me though but could be busy).

You can actually walk across a lot of Helsinki centre completely underground (I often do when it is raining), the underground network of tunnels is huge. And all bomb proof.

Finland actually has one of the most thorough civil defense programs in the world.”

“There’s a fallout shelter in a bank about a mile down from where I live that was built back in the 1960s.

I’d probably yank some snacks and a bottle of Jack from the kitchen and sprint down there, then hunker down for a few days.

If it’s locked, then… well… I can polish off the Jack and wait for the fireworks.”

“If I knew it was coming, I’d just drive away. Distance makes all the difference with nuclear blasts.

I’m close to mountains in the outer suburbs of a big city, I’d drive in that mountain direction as we often have winds from there. Minimal fallout that way too.

If leaving the city was not an option, I’d just hit up my basement. It’s below ground enough that I think I’d be fairly safe.”

“I’d gather my dogs and cats and go up to our bedroom and cuddle my husband.

Give the doggies and kitties some treats on the bed and hope they don’t jump off so that my last moments are a cuddle fest.”

“I’d grab a six pack, grab a chair and sit outside calling my family and friends while waiting for the end.

I’m not suicidal but any world that would exist after my city gets bombed would be unrecognizable and probably not worth surviving for.”

If I drive at 100km/hour, I would be 50km from the center of the explosion. A good distance.’

They have the 110% capacity of their population in bunkers so there’s room for me.”

“There is an old library built in the 1960’s less than a mile from my house with a basement fallout shelter.

I know because I always see the old 1960’s fallout shelter signs and consider stealing one but the potential of getting caught and being banned from the library for the rest of my life stops me every time.”

In the comments, tell us about when you told a lie that spiraled out of control.