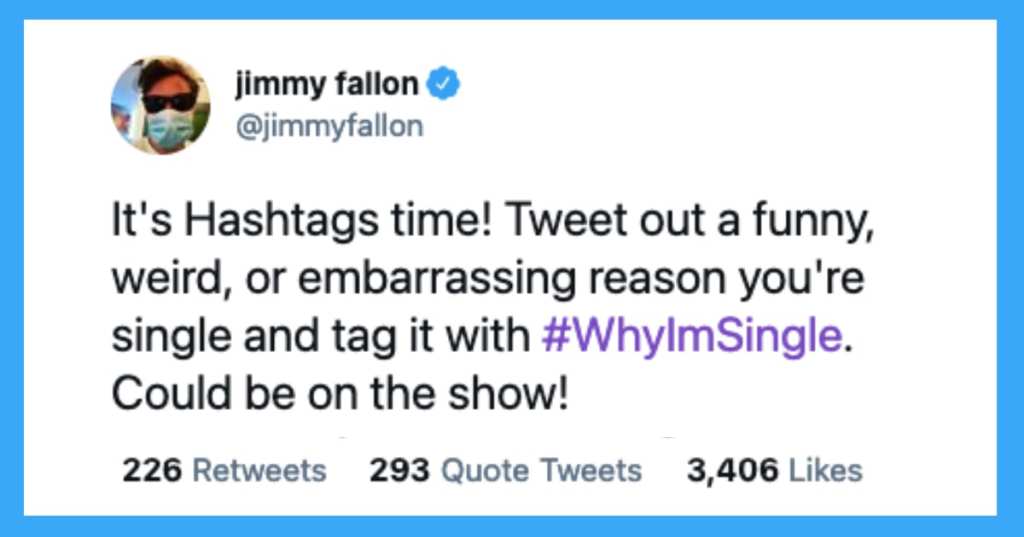 Being married is great, but as my happily single friends are quick to point out, remaining single can have its merits too.

A lot of the time, singletons seem to get a bad rap, as society sits around waiting for them to follow the socially expected path of getting married, having children, the end.

Comedian Jimmy Fallon recently leaned into this trope of teasing single folks, when he tweeted:

It’s Hashtags time! Tweet out a funny, weird, or embarrassing reason you’re single and tag it with #WhyImSingle. Could be on the show!

Fallon started off the game, by tweeting about a friend of his who was single.

My friend used to put Post-it Notes on his mirror for daily inspiration. His date came over one night and saw one that said, “Just be yourself, Kevin!” #WhyImSingle

Frankly, I don’t see anything to make fun of. We should all be more like Kevin.

Some people did see a little humor in the question, sharing their little idiosyncrasies that they were fine with, but that might discourage a long-term relationship.

I have various pillows with actors’ faces on them…my fav two are of Danny DeVito #whyimsingle pic.twitter.com/FowNTRpIO5

Be they real people or simply characters:

I have a lot of Captain America themed items (from phonecases, to power banks, to earphones, keychains, household items, you name it). Apparently it’s immature and unreal to crush on a fictional character 😂 #WhyImSingle

Sometimes your foibles are things you can help, and sometimes not.

My last girlfriend said I chewed like a horse eating toffee. #WhyImSingle

There was also the weighted blanket crowd, which… yeah. Waited blankets are amazing.

I’m with you, I would never give up my weighted blanket for a man 😂

A number of people seemed to agree with this person’s food habits, so maybe he just needs to find a partner on Twitter.

I prefer to eat SpaghettiOs cold, right out of the can. #WhyImSingle

And this one, for me, raised so many questions:

Are they single because they couldn’t find a partner who could tolerate the 3AM parties?

Or are they single because they don’t want anyone to be bothered by their 3AM parties?

The world may never know 🤔

Some people made jokes about online dating apps:

Even companies like Kraft got in on the joke:

We gave them pink mac & cheese for Valentine’s Day… #WhyImSingle

Other users got all too real.

#WhyImSingle because apparently I take loyalty and communication serious pic.twitter.com/O67vUbJuPN

There was this person, who honestly just really loves their dogs:

#WhyImSingle My last serious boyfriend told me I will never love him or anyone as much as I love my dogs. He was right and he is gone ✌️ He also told me I cant “foster anymore dogs” The next day I went and picked up a 100LB German Shepherd to foster. True Story.

Apparently it’s not uncommon for pets to come between partners:

I foster and rescue the loves of my life. My ex told me if I brought one more dog home, he was gone. I brought two for insurance purposes.
That’s #WhyImSingle pic.twitter.com/ks0HUl6nAu

Pretty typically, the cat lady got a few laughs.

And this person, who has political priorities, can’t be bothered:

Because only Republicans ask me out and I’d rather die alone. #WhyImSingle

But a number of the responses showed that young people today aren’t really buying it anymore.

Because I enjoy and prefer my own company more than anyone else’s #WhyImSingle pic.twitter.com/AH64d3jWhw

Knowing what will make you happy is a good thing.

#WhyImSingle I love being single and not having to answer to ANYONE pic.twitter.com/8lXcC3YKMW

Not having to share can also be a bonus.

Honestly, some people choose to be single and some people don’t, but for the most part you just are until you aren’t, whether you’re looking or trying too hard or not.

Did we leave out any good ones? Tell us in the comments.