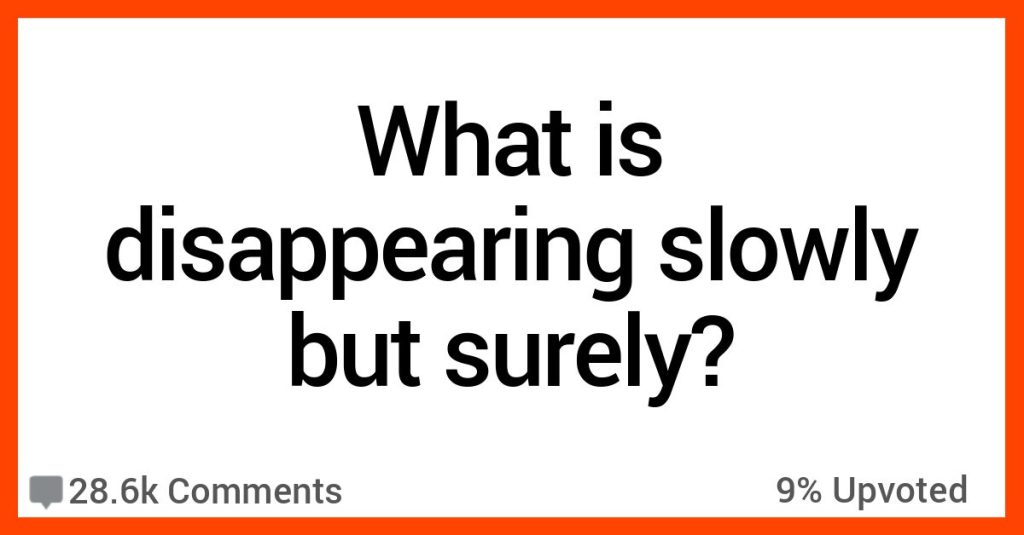 16 People Think On What Things Seem To Be Slowly Disappearing

If you’re a Millennial or a member of Generation X (or that micro-generation in between) there’s almost 100% chance that the world we live in today looks completely different from the world you grew up in. Our lives have changed in pretty much every single way imaginable since we came of age, and for the most part (sorry, side-parts) we’ve managed to keep up.

That doesn’t mean there are things that haven’t, though, and these 16 people have some pretty astute observations about things that are slowly disappearing right before our eyes.

I remember seeing bumblebees everywhere when I was in elementary school (early 2000s). I grew up in the midwest suburbia, and I have fond memories of grabbing my butterfly net after school and pretending like I was the the butterfly equivalent of Steve Irwin. Yes, indeed, I fancied myself quite the garden naturalist and explorer.

Neighbors would see me and my butterfly squad prancing through the neighborhood – bold little adventurers decked out in makeshift safari gear crouching, rolling, and patroling through the backyards – trying to scout out the very best butterfly garden hotspots. When we found a good garden, we would document it in our butterfly safari map. Then we’d revisit the butterfly oases as the season progressed to see how different flowers blooms impacted the bug turnout. We would catch all variety of bugs, put them in our bug zoo, and charge parents to see our haul. (Of course I would always release them – even if some of our zoo keeper fancied themselves as quite the taxidermists.)

We’d ALWAYS be dissapointed (70% of the time irl, but it felt like always) when we’d show up to our butterfly hotspots and see nothing but buzzing, droning, mindless bumble bees. They would come in such numbers! I thought they were pushing all the butterflies away. It was such a let down when I wanted those beautiful butterflies. I am sad to say I would have welcomed their extinction at this point in my life.

Not anymore. Today, I understand their importance. Sadly, I cannot remember the last time I heard the buzz of a bumble bee float by, and I will be sure to take a mental snapshot next time I see one. For all I know, it could be the last bumbler I ever see.

“Well ya see, Norm, it’s like this… A herd of buffalo can only move as fast as the slowest buffalo. And when the herd is hunted, it is the slowest and weakest ones at the back that are killed first. This natural selection is good for the herd as a whole, because the general speed and health of the whole group keeps improving by the regular killing of the weakest members. In much the same way, the human brain can only operate as fast as the slowest brain cells. Excessive intake of alcohol, as we know, kills brain cells. But naturally it attacks the slowest and weakest brain cells first. In this way, regular consumption of beer eliminates the weaker brain cells, making the brain a faster and more efficient machine. That’s why you always feel smarter after a few beers.”

I cut the cord recently when Spectrum raised my cable/internet bill to $230/month. Dropped them, got Frontier internet for $70/month locked in for 3 years, bought a $10 antenna to get local channels.

I got Netflix/Disney/Hulu for streaming. I hope to never go back to cable.

E-commerce has been going crazy and Covid I feel was the final nail in the coffin. I saw a shirt for 25$ in the mall in a store and saw it for $13.99 on Amazon it also took a day to have it shipped to me.

But I went to a mall a few days ago (one of your classic JCPenny, Target, Macys on each corner, Hot Topic and other stores in the center) and it was just….. dead. Not good at all and really weird feeling.

Affordable housing, just when I started looking for my first home 🙁

Adelaide Australia here, husband’s GP complained he’s being priced out. Offered $350k over asking. Sellers said no and went to auction; got $500k over auction. In godd**n Adelaide!!!

Bees are dying at an alarming rate.

Specifically the niche bees that don’t live in hives and don’t make honey. Honey bees are wiping them all out through competition. Soon the only bees we will have left will be honey bees.

I always love seeing my bumble bees. I let most of my land go to be natural so I get a lot of different species of bugs but bumble bees and furry bees are my favorite.

the existence of any semblance of community in real life

I’ve tried to foster that sense in my own neighborhood, we do decently, but i think what I’ve noticed that kills the sense of community is

1: people not willing to actually leave their house, and

In the 5 years I’ve been in my neighborhood, it’s almost all completely new people. There are 2 families on my street that are still here from the beginning. Most people seem to move within 3 years.

Compare that to when i was growing up in the 90s and 2000s, everyone in my parents neighborhood had been there for decades and everyone knew everyone. It’s hard to keep up and build relationships when people just up and leave.

My neighborhood growing up was semi rural though whereas now I’m in an Atlanta suburb, don’t know if that’s making a difference but it definitely seems like as soon as you become closer friends with the neighbors they leave.

There are people in my parent’s neighborhood that have lived there since the houses were built in the late 60s. I really miss it, so i try to help it happen. I think it’s super important to know and be friendly with your neighbors so when the time comes you all have each other’s backs (i grew up in hurricane areas).

I can only hope this changes 🙁

I’ve been steadily turning my yard into all native and edible plants. I compost everything, and have been actively overseeding clover. And every day I’m glad I don’t live in the kind of neighborhood where any of my neighbors has bothered to even bring it up.

From my perspective they’re the weird ones for spending countless hours and $$$ trying to preserve a pointless and decaying piece of ‘culture’.

Edit: I’m in fort worth TX to be exact for those asking. About a 30 min drive from Dallas

I feel like people who say “common sense” haven’t been paying attention to history much.

There’s a reason we have a lot of safety rules and advanced medicine.

Only pages posting memes and videos. Almost no real person still posts what they are up to.

There was a recent survey that showed a lot of young people have stopped using Facebook.

5. Just do a little self-examination.

It’s an effort to watch a full TV show or movie without getting distracted by your phone.

Frogs, bees, insects.. chain of life species that connect the web. When those pivotal groups go extinct, humanity is f**ked.

Considering that when I was a kid there were still a few WW1 veterans shuffling around an I’ve seen them go extinct, I’ll likely live to to see the WW2 guys die out also. Sobering thought really.

2. Because no one has quarters, either.

Telephone booths are prob completely gone by now I haven’t seen any in years.

A whole bunch of plants and animals.

I’m really going to miss some of this stuff, y’all, and the world where they thrived. Not everything was better then, but some things were.

What about you? What’s going away that you’re going to miss? Let us know in the comments!