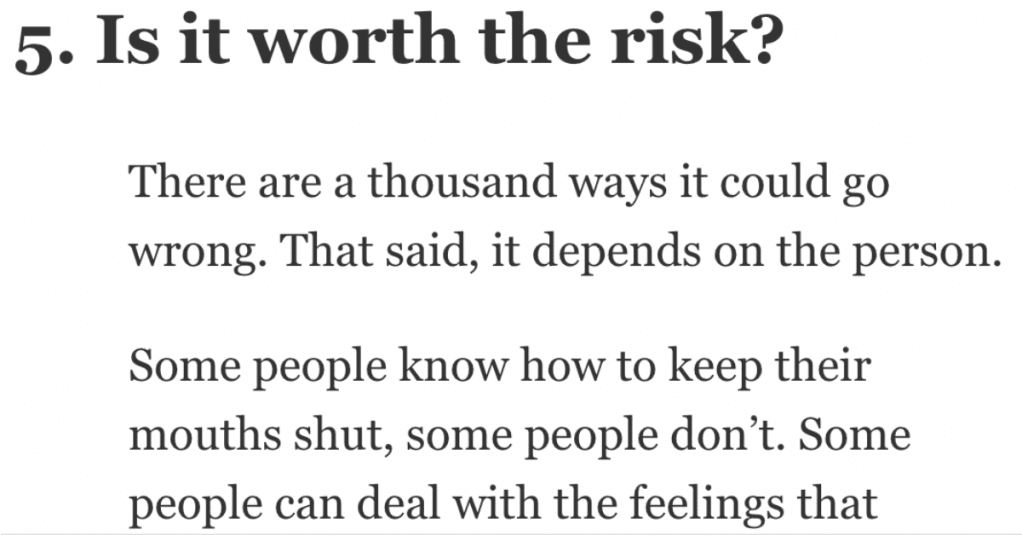 16 People Weigh In On Casual Flings At Work

I honestly thought that we had decided, across the board, that mixing business with pleasure wasn’t the best idea in the world. That said, I suppose some people enjoy playing with fire, or maybe it’s just that things happen and they can’t help themselves?

Whatever it is, apparently there’s a difference of opinion out there on casual flings at work – and these 16 people are ready to hash it out.

16. You’ll need to accept that you need a new job.

I also know a lot of people who met their SOs at work.

Generally speaking it’s not going to end well, especially if you work close (if your in different departments who cares).

But yea, you’re going to have to accept the idea that in the likely case you break up, one of you will probably need to find a new job

I’ve spent decades in the work place, and seen too many “casual hookups” go sideways, with one or both partners trying to to turn the happy ending into a promotion, or getting a coworker fired, or both get fired after disobeying company regulations.

Most companies have very specific restrictions on romance in the work place, as in: keep it off the property, no romance at work. Best response, talk to me after work, off work property, or don’t talk to me about it at all.

15 20 years ago, when in several management positions, i would take potential hires out to lunch, to interview. I quit that too, as after hiring a few people, they would compare lunches and then complaints or jealously would arise, he took you there?! i only go to to *****, that’s not fair. Now i don’t take anybody work related, anywhere, and work is work and after-hours are for me.

I bought $200.00 dollars worth of Las Vegas T-shirts after a trade show, with my own money, gave them to the staff when i got back from the show, 2 days later it turned into “that shirt is better than that shirt, i got screwed” etc. etc, sandwiches, chocolate bars, put 10 people in a room and there will be several complaints, and then “scrooge”!, after i quit trying to give a few small perks to people to brighten up thier work-day.

A casual hook-up?, most people don’t seem capable of even having a conversation, unless its a complaint, about a coworker or the company. I’m working part time now, no responsibility or handling of employee issues, it’s heaven.

14. You have to think about the future.

When I was in my early twenties, working dead end jobs that had no future and I could easily replace, everyone was fucking everyone. Why not? We did it for a paycheck and we were having fun with our friends.

Now I have a family and a “career”. People still hook up but it’s very hush hush. I don’t cheat on my wife but even if I were single I wouldn’t want to jeopardize what I’m building here.

I think it’s a matter of perspective.

13. Sometimes it works out.

I had a Casual thing with a co worker six years ago and we simply never stopped.

Today we casually share a flat with a cat and keep doing our thing. Best Idea my penis ever had, casually.

12. Obviously it works out for some folks.

dont get your honey where you get your money.

is what i would say, if not the fact that the workplace IS your best place to find your partner. hell, my office alone has a history of successful relationships that started in the very office we work in. we even have two (going three) couples getting ready to get married next year!

I casually hooked up with a co worker.

Funny how life works out sometimes.

10 years ago (yesterday) I organized a “team karaoke outing” with my coworkers specifically for the purpose of getting this one new guy at work to come out of his shell because I had a big crush on him.

We’ve now been married for 5 years.

Did it, was frickin’ awesome… until it wasn’t.

Y’all get too close. Someone’s feelings get hurt over something. Still stuck together for eight hours everyday.

8. They eventually come for all of us.

We meet again, consequences of my own actions.

7. So many things can go wrong.

If one of you gets a promotion the shift in power dynamics can create a bad work place.

If they become a supervisor and you are both f**king each other coworkers that find out now have legit ammo against you.

If you get any sort of perk, a raise, O/T, or even just a “good job” they can go to HR and point out you only got that perk because you are f**king the Supervisor.

It’s sloppy but if they only pay you like $13 an hour, you might as well have fun.

There are a thousand ways it could go wrong. That said, it depends on the person.

Some people know how to keep their mouths shut, some people don’t. Some people can deal with the feelings that almost inevitably come into play, some can’t.

Bottom line, don’t risk an essential relationship or a job you need, unless they’re really that special.

Working at a large audit firm, third year. New wave of first year associates joins and instantly me and one of the new girls hit it off. We fuck a couple of times before BUT as is often the case with casual hook ups one side will catch feelings. Was me in this case and she wasn’t looking for a relationship.

After breaking things off can confirm was super awkward at work. Luckily covid started a couple of months after we stopped hooking up so I didn’t have to suffer seeing her in the office all the time. But I still couldn’t bare to work in the same team as her so I ended up starting job searching. Found a new job which paid almost double and was in my dream city (London).

TLDR: get yourself hurt by a coworker to further your career.

3. It could end up costing you.

I had to call myself out on this. I was a Senior Associate, hooked up w/ another Associate. One night stand, very mature “no big deal” attitudes about it.

Two months later I was promoted to be a manager and she was put on my team. I had to go into my Director’s office and say “hey, I got the alignment but I need to talk to you. Unfortunately, I don’t think it’s appropriate if (name) reports to me…” He asked why, I told him we hooked up after a work happy hour and said “I don’t want to make her feel uncomfortable, it was pretty recent.”

He was surprisingly understanding but essentially told me “you know that now you’re a manager you can’t keep doing this s*%t right?” and I told him I totally understood. They reshuffled the teams and all was good.

Still, that was a heck of a conversation to have right after they give you a promotion lol

2. Everyone thinks they’re the exception.

It’s always a bad idea… except for this one time.

1. Some people just can’t help themselves.

It would appear that the overwhelming consensus is that this is a bad idea that absolutely should not be pursued.

Now that we’ve got that behind us, I wish you good luck on your ruinous endeavor!

I mean, there are some decent arguments here. We only get one life, right?

Where do you fall on this one? Give us your thoughts in the comments!