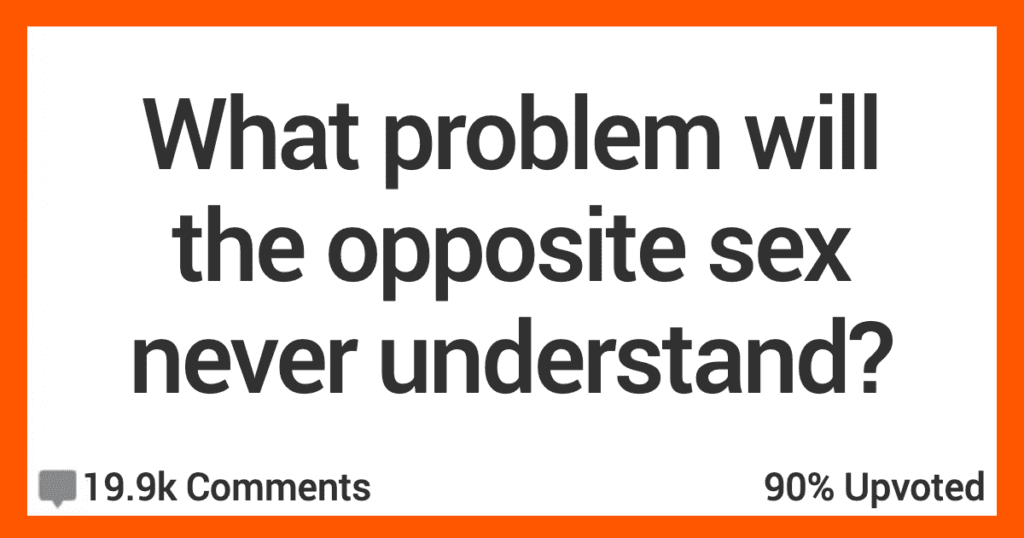 One of the most frustrating things about life is how hard it can be to put yourself in the shoes of someone who lives a completely different experience than your own. This applies to race, sexual orientation, religious preference, biological sex, and yes, about a hundred other lived experiences as well.

If you’re a woman curious about what it’s like in a male body (or vice versa), these 16 people are getting real about the things you’ll never fully understand!

I hate that people are afraid of me sometimes.

I get it, i’m kind of a big guy and there’s no way to know who’s safe and who isn’t, but i really hate knowing that other people might not feel safe around me, I don’t want anyone to feel that way.

No reason boners or NRB’s for short.

In middle school me and my friends called it ABS – Awkward Boner Syndrome.

“Man I had the worst ABS in English today”

Yo I think I’ve experienced this, not in myself but once I ran into 2 absolutely massive brothers at a hotel. They looked like giants from a fairy tale book. Hyper-masculine and just gargantuan.

But they were the nicest people. Only had a few seconds of interaction, but they gave huge smiles and made sure everyone around them had the right of way.

From the hopeful look in their eyes it almost seemed like they were just praying I and the other people there wouldn’t be scared of them. I felt sad for them, cuz I would hate to feel this way constantly

13. It happens to everyone.

Totally accurate dude. I try explaining to my girlfriend that sometimes the stresses of life keep me from being 100% present during sex. When that happens it’s difficult to keep it up all the way.

When you take your first pee of the morning and you accidentally produce a dual stream, missing the bowl with one or both. Wife: “What’s the matter? Can’t you SEE?”

Edit: Yes, I do clean up after myself. She smells it. So I use Lysol wipes. She smells THAT. And knows.

One time I rolled out of bed and as soon as I was on my feet my uterus decided to dump all of its contents at once.

Sudden warm feeling all down my legs. Worst feeling ever.

Pregnancy and labor is some next level s*%t. Like really.

Also peeing a little bit whenever you sneeze, laugh, cough, or jump for years after the birth.

My girlfriend and I were cuddling after sex once and she was playing with my d**k.

Out of nowhere she asks “how does something so small get so big?”

When your unborn baby keeps headbutting your cervix while simultaneously kicking up under your ribs.

Man, my baby decided to dislocate my rib by kicking me when I was pregnant. And yes, he’s still grounded for it.

Getting hit in the balls is pretty popular but I got with peeing while having morning wood. Seriously.

That painful awkward half squat while simultaneously wrangling the python to prevent spraying half your bathroom with morning pee is is the worst.

How little control we have over boners and the shitty times they might pop up.

And the terrible times they won’t.

I think most men probably don’t understand how the fluctuation of hormones throughout the menstrual cycle–meaning, not just during PMS and the period itself–impacts our minds and bodies.

Every week I feel different and my body behaves differently because of it, and that can be really disconcerting at times.

Sweating in a bra.

Edit: The other sex not fully understanding is displayed in the responses below.

We all experience discomfort when we sweat in clothing/items that are wrapped tightly around our bodies. But something you cannot understand is what it’s like to do so with two bags of human tissue overlapping said tight clothing. This is precisely why I chose sweating in a bra as opposed to sweating with boobs. Some guys have boobs, but not many men with large breast tissue or fat accumulation in the chest wear bras.

I do recognize that there probably are some out there who do, but a question like this begs for generalizations.

2. It can be inconvenient for sure.

I think men don’t realize what a pain in the ass it is not to have the upper body strength that they have.

1. The least fun guessing game ever.

“Am i on my period, or is it just discharge?”

Or when there’s an “air bubble” or something in the discharge and it kinda uncomfortably tickles so you have to squeeze your legs tight or whatever to “pop” it.

…Please for the love of god tell me I’m not the only one.

We may never fully understand it, but it is fascinating, don’t you think?

What other pearls and gems do you have for the opposite sex? Lay them on us in the comments!