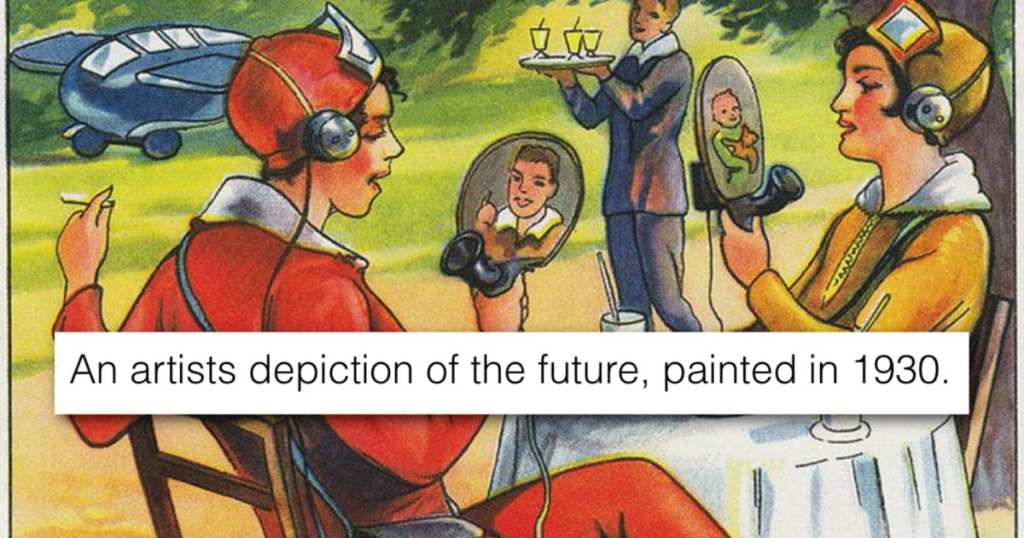 17 Examples How People From the Past Imagined the Future

It can be weird to realize that we’re living in someone else’s future, can’t it?

For someone who lived a hundred or even forty or fifty years ago, it would have been impossibly to imagine what our reality would look like – but that didn’t stop people from trying.

These 17 images are what people in the past thought our world would look like, so let’s take a scroll and see if they’ve gotten any of it right!

17. I wonder whether or not anyone believed it would happen.

Television Newspaper – some day you may be able to receive the front page of your morning Newspaper this way. from RetroFuturism

I’m not sure about the flight suits, but the phones are blowing my mind.

An artists depiction of the future, painted in 1930. from interestingasfuck

15. Smartwatches are for everyone.

I’m sure Bond is disappointed.

James Bond receives a "text" via his smartwatch in The Spy Who Loved Me. from RetroFuturism

It’s something we’ve always dreamed of, I guess. And we’re living it.

13. Of course we will take cats into space.

How could we live without them?

But maybe it’s always been inevitable.

Self driving cars of the future, circa 1960. from RetroFuturism

11. A prototype for the world of Dredd.

Which wasn’t a bad remake, if you’re wondering.

1981 vision of suburbia after there’s no more room left for suburbs. from RetroFuturism

What sort of shoes will we be wearing, though?

We really messed up from RetroFuturism

9. It’s like something out of a science fiction movie.

Which is probably the point. 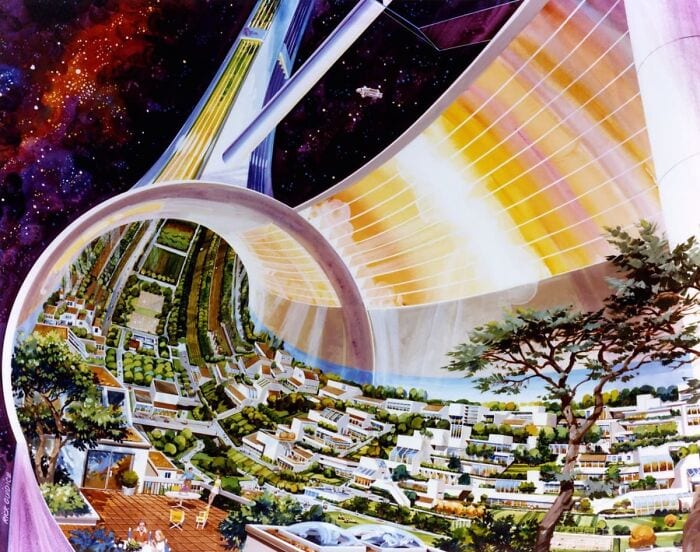 8. They were just going to be…wider?

To be fair, humans do often choose style over substance.

The future of phones, 1956 from interestingasfuck

7. I would buy this in a heartbeat.

Honestly it would sell out.

6. This is actually amazing.

At least as good as the MapQuest pages I used in college.

A Fifties navigation system. Don’t know who imagined this but I love it! from RetroFuturism

5. I wonder what a teacher would make of this.

Anyone want to weigh in?

1969 Japanese vision of the future classroom, the odd part is that included small robots to rap students on the head when misbehaving from RetroFuturism

Air travel has gotten more uncomfortable and tight, instead.

3. Were we reverting to tribal wear?

I approve of the no pants.

Fashions of 1950, as predicted on the cover of Life Magazine in 1914 from RetroFuturism

2. I would get behind this reality.

I definitely think we need roomier cars, though.

Futuristic Road Trip with the Family (Bruce McCall) from RetroFuturism

To be honest, I wish that a few of these things had come to pass.

How about you? Tell us in the comments what you hope to see before the end of your lifetime?