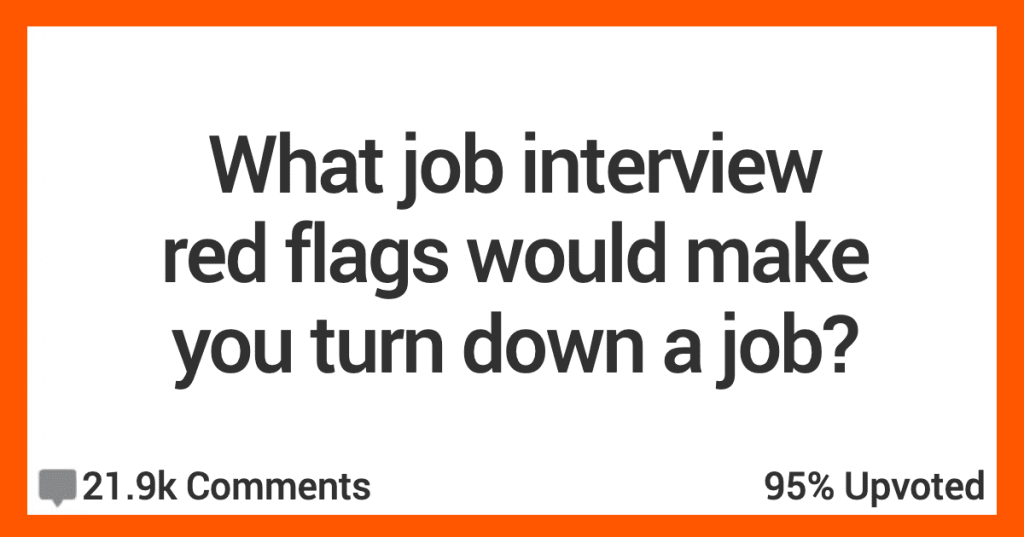 We hear a lot about why employers would turn down an applicant based on their resume or their interview, but what about the times the opposite are true?

When you’re looking for a job, hopefully you have the luxury of holding out for the right fit – and if so, these 17 people say you should be on the lookout for these 17 red flags.

My favorite is ‘there’s a lot of people waiting in line to work here, count yourself lucky. Huge red flag

I always ask about training and learning curves. Every job I’ve had that went wrong- I notice that when that question came up they stumbled.

The current job I have, when I asked the question they had sparks in their eyes as they explained the whole process from day 1 of shadowing to the transition to working solo.

And even when covid hit they managed to continue without skipping a beat.

I was once part of a group onboarding for an IT job. They handed us all the one-page new hire “contract” and everyone except me signed immediately. When I read the paperwork, I discovered we were signing a mystery document.

Clauses included “I agree to abide by the personal search and seizure security policy (attached).” Without other pages, there was no way to determine what I was agreeing to.

I kept requesting more and more pages until the HR drone said “ok, I guess [me] is just determined to hold everyone up. We will handle you separately if you’re struggling so much.”

After I walked out and drove home, I called the hiring manager to apologize for not taking the job. He informed me that HR reported I had walked out after refusing to be drug tested

They told me all about their generous severance packages.

In the initial interview.

“Yea, everyone here is new, but it’s totally because of covid”

“The boss doesn’t like people going out to get lunch because they’re afraid you’ll never come back, so being your own lunch”

“You’ll get weird looks if you leave on time”. It was a chinese owned company with heavy chinese work culture influence so you were expected to stay overtime all week.

Also “the people here are nice but it’s pretty stressful”.

Eta: also was told by my trainer “you want to know the best advice I can give you? Find another job”. This was like…my 2nd week in.

“Well, the overtime isn’t mandatory, but most folks stick around after hours most days.”

Spoilers: The overtime is mandatory.

The most terrifying thing is that in any places, the managers won’t even need to encourage/threaten you to work overtime. Your coworkers will shame you for “leaving early” if you leave right when your working time is over.

if they make shifts 7 and a half hours long so you don’t get a lunch.

At my current job, after my interview the manager said ‘just don’t get involved in the staff drama and you’ll be fine’.

It has not been fine.

Besides always hiring, they seem almost overly eager to say, “Yes, we could do that!” to everything you ask.

No job will have literally everything you want, and if your gut is telling you they seem to be promising a bit more than they can offer, they likely are.

When they ask out of no where what clients can you bring with you.

I interviewed with MetLife insurance about twenty years ago. They demanded that I provide them with a contact list of no fewer than a hundred friends and family.

Noped out of that quickly.

6. Three strikes and you’re out.

I had an interview once, the owner of the company told me he was going to hire me, let the man in the office train me, then fire that man once I was up to speed.

He also told me that sometimes employees have to hold their paycheck.

And the final capper, (not that I needed it, I had already decided not to work for him) was he told me I looked like his nephew. I am female.

We cater lunch and dinner for our whole team!

Sounds like a positive, but what it means is, “We expect you to be working past dinnertime hours, and there will be a lot of social pressure to never leave, and to socialize with the team well past working hours. We don’t understand that anyone might want a life outside of work.”

Less of a problem now, hopefully, but in the tech bro heyday, this was super common.

4. Thanks but no thanks.

Once an interviewer straight up asked me if I had any trouble working for free on weekends… I told them my free time is more valuable than anything and that the only way that I would work a weekend is if they are paying me and if I felt like working a weekend.

She got really mad at me and ended the interview right away.

Biggest red flag I’ve ever seen because they didn’t even try to hide it.

This actually happened to me:

Interviewer: Do you have any questions for us?

Me: what is a challenge this department has recently faced?

I had a job interview with two people asking questions. One of them brought questions for the wrong position.

Things I found out later:

The person on the IT team who had been with the company longest had been there just under a year.

Their turnover was higher than McDonald’s – over 50% turnover annually. They had a goal to get it down to 40%.

Bonuses only get paid one year after you’ve been there… for a full calendar year, that only starts counting on January 1st. If you get hired January second 2020, you wouldn’t get your first bonus until 2022.

They had tracking software for your every keystroke, idle time, programs you were active in. They would question idle time, which meant people on the phone with clients would be questioned often because their computers would be idle.

There was a lot going wrong but the interview slip up wasn’t enough to really give it away in time. Suffice it to say they didn’t meet their turnover reduction goal.

When you are signing all the forms they give you and you are taking your time to read over every document so that you can fully understand what you are getting into and people come in and start telling you that you don’t need to read this and that just sign here and so on.

Yeah, I’d say all of these qualify for sure.

What else would you add to this list? Let us know in the comments!