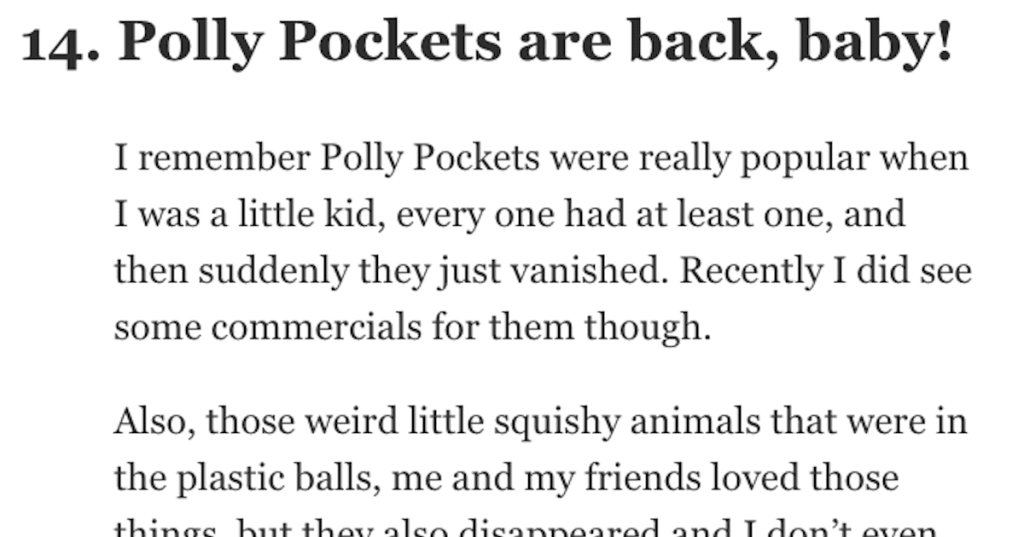 17 Surprise “Hits” That Seemed to Come Out of Nowhere

It can seem like there’s never a real way to predict what’s going to be the next big thing, though if you put enough money behind something, it’s usually a pretty good bet.

These 17 surprise hits, though, really did seem to come out of nowhere.

Why is poop part of sooooo many children’s toys!?!

16. What if you build them a tiny skate park, too?

Those tiny hand sized skateboards that people would do tricks with their fingers and stuff.

I don’t see them now but they were huge when I will in middle school.

People hoarding toilet paper is probably the highlight of 2020.

I remember Polly Pockets were really popular when I was a little kid, every one had at least one, and then suddenly they just vanished. Recently I did see some commercials for them though.

Also, those weird little squishy animals that were in the plastic balls, me and my friends loved those things, but they also disappeared and I don’t even remember what they were called.

13. Teachers must be ever-vigilant.

When I was around 11/12ish they suddenly became the thing to have.

The more Ball bearings and flashy lights the better.

If you could do more than one trick you were god of the playground.

I also remember them getting banned in school.

Flipping a bottle of water to make it land right side up.

11. Because who doesn’t love to wear work boots every day? I guess?

I walked into a store one day to purchase a new pair of yellow boots and come to find out they’re all overpriced designer fashion now.

Apparently they’re still good to use as work boots but I’m not that interested in paying the trend premium.

Champion used to (still might?) be the official brand of various pro and college sports teams’ merch.

They also essentially invented the hoodie. It was huge in the 80s. It being an unpopular/cheap brand is a very late 90s/2000s thing.

9. I still can’t believe this.

People embracing it and people making fun of it.

8. Who would have guessed?

If I worked in the video game industry and some guy told me the business plan is to have the game free and we will make money with people buying skins I would have laughed in his face.

It’s just a character that the guy plays. He also does a few videos out of character and I enjoy them.

Can’t blame him, he got a viral video blown up and is capitalizing on the success. I hope he will branch out and do more, he’s funny but that one trick will eventually get old.

6. And not just for ADHD kids.

Fidget spinners some time back were extremely popular for no reason.

5. Because people are lazy?

In Elder Scrolls Online you can get pets for your character that follow you around. Come April 1st, pet rocks are available. They have no animations, they just sit there. They don’t even follow you like other pets do.

But linger anywhere too long, and you may notice that there’s a rock behind you. Always the same rock. Just sitting there nearby. Like it needs to be close to you. Like it will never let you go.

Furby. The original one, not the new one with digitized eyes.

I didn’t know what that thing was as a kid, but you better believe as soon as I saw it, I wanted it.

Tiger King is just The Office but if everyone did meth.

I was so surprised to learn the game is 2 years old! It came out of nowhere and exploded in popularity, I was sure it was a brand new release.

So glad for it though, watching Among Us streams is most fun I had with video games without actually playing them, and I watch A LOT of esports.

QAnon. The whole thing sounds completely ridiculous but the number of people that believe in it is even more ridiculous.

I went from hearing about it second hand to now having a couple of friends and one family member buying into it. No amount of rational discussion seems to help.

I’m having a hard time coming up with a real explanation for these, how about you?

What would you add to the list? Tell us in the comments!