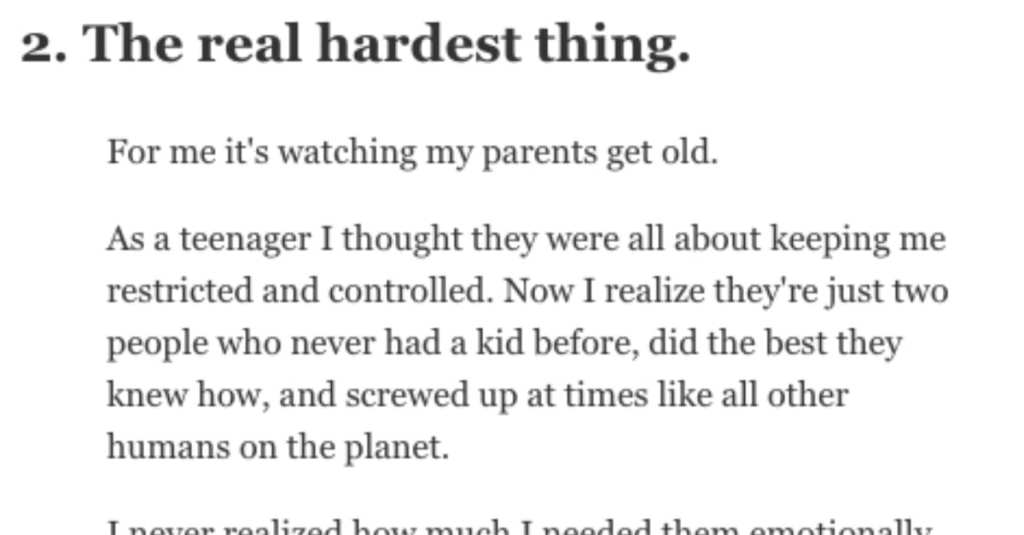 One of the biggest jokes of life is how, as a kid, you can’t wait to grow up.

You think it’s going to be so great, doing what you want, eating what you want, no one telling you what to do…but once you’re actually an adult, you quickly realize there are a whole lot of responsibilities that come along with the fun.

These 18 adults are only too ready to impart what they’ve learned on the younger generation.

As if they’ll listen.

18. Everything hurts for no reason.

The moment you need to pay for everything and the realization that fresh food spoils faster than you ever noticed before was eye opening.

16. You can’t actually do what you want.

You can do whatever you want, but most of the time you either have commitments that prevent it, or you can’t afford it.

You can count your friends on one hand and most of those have been grandfathered in.

You know all those things you thought you would do when you were out on your own?

They cost money, and you have to work for it…

One day, my mother was giving me a lift home from university and helping me move some possessions.

My grandfather was in his late 80s. And they’d had a brief row over something. It’s important to note that they are very close and this was highly unusual for them. And it was nothing major, just the sort of conversation that leaves you rolling your eyes, muttering ‘patience…’ to yourself, gritting your teeth and wondering why doesn’t this incredibly sensible person get that?.

Can’t remember for the life of me what it was over. He’d said something cantankerous that was irritating and a little selfish in the way that some older people can occasionally be.

And she vented for a short time, letting off some steam.

I was in my 20s. Finishing university. And it was the first time I think that I’d been in a position with my parents to relate to a fellow adult and about adult problems. Rather than be the kid they tried not to burden.

Always prepare for the worst.

Discipline is very hard to maintain when you are lacking purpose.

When you are a teenager there’s so much you think you can achieve:

“I’ll get into that college.”

“I’ll land that cool job after.”

“I’ll date that person who will fulfill me.”

However, what happens when those things fail and you have to readjust? What if the idea of progress turns into an idea of just sustainment?

My advice to teenagers: The most important thing you need to work towards figuring out as you enter into early adulthood is your purpose. It can change over time of course, but never be without it.

10. You realize you don’t need that many, though.

Making friends as an adult is difficult, sometimes verging on impossible.

You don’t see people in your age group who are doing the same things you are every day anymore.

The repetition makes you lose time.

Having the same job, workout regimen, schedule in general makes days blend into one another.

You come home from work and you’re tired and if you don’t feel like making dinner, then you’re not eating dinner.

There’s never enough time for all the things you need to do.

Definitely not enough time for the things you want to do.

6. You will miss your friends.

You’re at a time in your life when you see your friends almost every day at school.

That should be cherished, because it’s vastly simpler than maintaining friendships as you enter adulthood and you don’t have that constant contact.

Life as an adult is change, most of it outside of your control.

People change, circumstances shift…all of that work you put into your adult friendships can vanish in an instant, and you just have to adapt and move on.

4. You could still call your dad…

When something goes wrong or something unexpected happens, there’s no one else to deal with it.

Plugged toilet? You gotta clear it.

Run out of clean undies? You gotta do laundry.

From small things to massive things, there’s no one to make it go away but you.

You are always cleaning the kitchen.

For me it’s watching my parents get old.

As a teenager I thought they were all about keeping me restricted and controlled. Now I realize they’re just two people who never had a kid before, did the best they knew how, and screwed up at times like all other humans on the planet.

I never realized how much I needed them emotionally until I saw my father through his open heart surgery, and saw Parkinson’s take my mother’s independence.

So here I am still feeling like a teenager on the inside, staring down the barrel of 50, wondering what the hell happened.

1. You’re so much more careful with your own money.

That ordering food is actually expensive and your parents weren’t lying to you.

I definitely agree with all of these (but there are good parts, too!).

What’s been the worst part of adulting for you? Tell us in the comments!