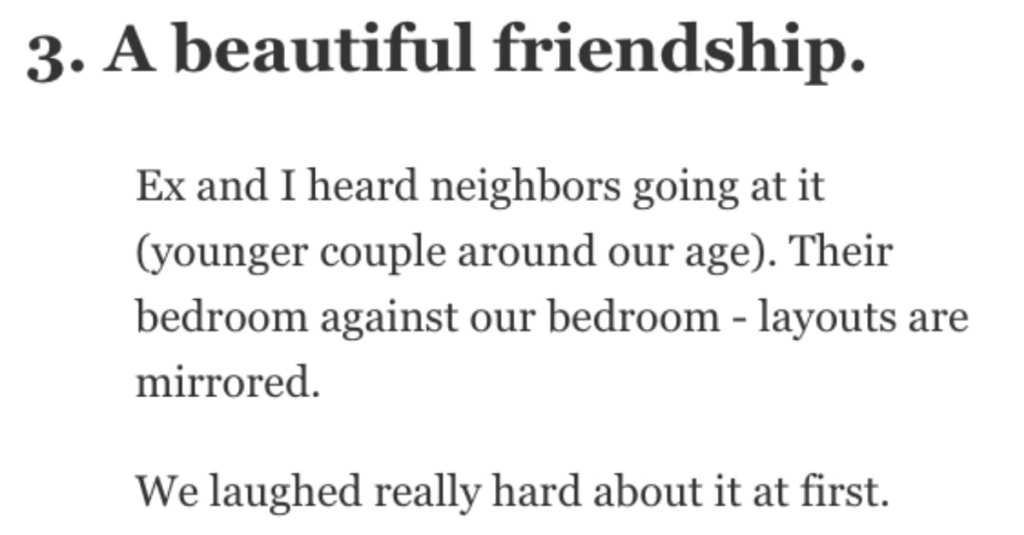 Living in an apartment has its perks, but like everything in life, it also has its challenges. Whether you live in an apartment, a condo, or even a house, neighbors are one of those things you just can’t predict until you’re actually, you know, living in a space for awhile.

If there’s an upside to neighbors, especially for the nosy and/or curious among us, it’s being able to overhear things that we would otherwise never know.

And these 18 people have heard some pretty juicy secrets.

18. Restores your faith in humanity.

I learned that my neighbor is a nice guy and a good father.

I always hear him and his wife playing with their baby and being goofy. It’s really cute and a nice change from my last neighbors who would scream and beat each other.

17. Yeah that would be riveting. And terrible.

Been a few years ago but the family living next to me had a daughter about 13 or 14 years old and her mom walked in on her laying face down in the bathroom floor trying to take a picture of either her a$shole, vagina, or both to send to some 30 something guy she met online.

I know all of these details because mom shouted them at dad when he got home from work and berated daughter for hours. Mom also called the police to report the guy asking for the pictures.

I ate my supper cold because I didn’t want to make microwave noise in the kitchen because mom was on a roll and it was pretty crazy.

I learned that my old neighbor’s kid is… an adventurer in the body of a nine-year-old boy. The first conversation I ever heard between mother and son was something akin to her shrieking, “WHAT ARE YOU DOING TO THE CARPET?”

I often heard her crying and one time asking him if he’d prefer to live with his dad, because he seemed miserable with her. She thought that was why he was acting out. He ended up crying, too, and begging her to let him stay. So he did, and at least they seemed to get on better after that.

To not end on a sour note, the funniest thing I think I heard was her shrieking, “OH MY GOD, WHERE DID YOUR CLOTHES GO?”

She scolded him, but after I heard him stomp off, I heard her laughing pretty hard on the other side of the wall.

Years ago I lived in an apartment with the thinnest walls I’ve ever encountered. I could hear everything and my neighbor and his girlfriend were quite active to say the least. One day I started thinking, ”

Her voice sounds different. Uh-oh.” Sure enough, the next day the girlfriend comes over and they had a huge fight. I don’t know how she found out, but she found out pretty quickly.

14. That’s quite a powerful flush.

Sometimes I can feel when my neighbor uses the toilet.

If I’m in my bathroom, especially on the toilet, I feel a shift upwards as if they say down at the same table as me.

She sounds like a man squatting more than his ability when she has s^x. She sh%ts at 430am and pounds on the wall due to constipation.

Her ex husband likes to f*ck her in the kitchen, with the windows open so everyone can hear.

My Chinese neighbor sings to someone through the phone about 3 nights a week. I don’t know what he is saying but it sounds like he really loves whoever it is he is singing to.

I don’t really get annoyed by it because I think it’s a pretty sweet thing to do. It’s to the point now that if I don’t hear singing for a while I get a little worried about him.

Some a**hole who lives right above me is a lot louder than he seems to think he is.

Just the other night, I learned he’s quitting alcohol and switching to wine.

10. Why unfortunately if it’s promising?

My neighbor has a promising career in opera… unfortunately.

9. I want to be friends with the nerd.

That the cop next door is way too nosy.

The kids who lived above me used to throw parties all the time. Loud music, drunken yelling, the works. He thought it was me, and apparently my RF/DC shirt (a parody of the AC/DC logo but for a science thing) was proof enough. He called the cops on me one night when the kids threw a party again.

I open my door in my star wars pajamas to two uncomfortable looking cops. They take one look at me, apologized, and explained the mistake. I found out later it was my neighbor when he got in my face about the noise I was making… it was my sewing machine… at 2 in the afternoon.

My old neighbor was really lonely and adorable. She talked to her two dogs all the time.

Her husband had died so she lived there next door to us. It was sad but we had a friendship with her.

We would visit with our son occasionally, even after we moved.

7. That’s traumatizing for a kid.

I heard my neighbor give birth when I was a kid.

It was planned, there were a bunch of people there and she did it in a bathtub or something.

6. You really get to know people.

My neighbor next to me has an unhappy relationship.

The neighbor above me is gay and has dreams of going to Broadway.

5. Who hasn’t had this conversation?

My neighbors used to get really high and make crazy food and eat snacks loudly late into the night. My favorite thing I ever heard as I was passing by was:

“And then put some f*cking cheese in it dude.”

“You mean stuff it in inside the bell pepper??”

It isn’t a secret since the whole f*cking apartment can hear it, but apparently my next door neighbor likes to watch Michael Bay movies at full volume.

Ex and I heard neighbors going at it (younger couple around our age). Their bedroom against our bedroom – layouts are mirrored.

We laughed really hard about it at first. Then it got really annoying. So we basically started making all the same noises at the same time they did.

After about couple months of doing the noises to them, I ran into the neighbor getting mail and we both cracked up hard.

Came to find out they had heard us having sex first and started making noises. Which we thought was them having sex so for the past few months the 4 of us were literally laying in bed making sex noises at each other through the walls..

My upstairs neighbours absolutely love to move their furniture around.

I assume this is supposed to be a secret because it only happens between 3 am – 4 am.

1. You’d think the second one would be more common.

Everyone seems to have neighbors who f*ck a lot.

I heard my neighbors get into a fight because she WONT have s^x with her husband anymore.

I’m dying. I can’t decide whether or not I would actually want to know these things.

What have you overheard through the walls? Please, tell us in the comments!