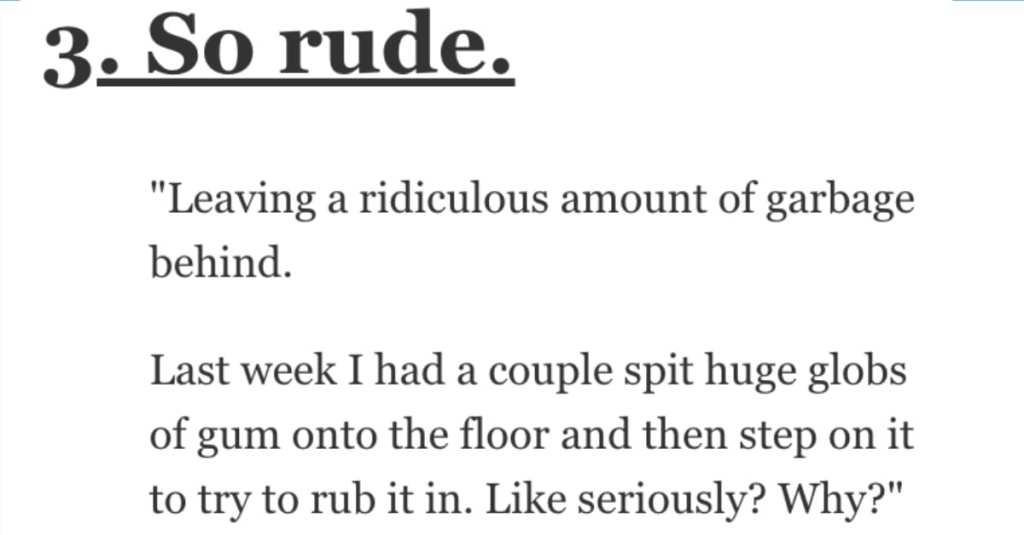 Flight Attendants and Pilots, What Do Passengers Do to Annoy You? Here’s What People Said.

It really makes my blood boil when people misbehave on airplanes and at airports and treat crew members like garbage.

Just keep your opinions to yourself, go along with the program, and you’ll be at your destination before you know it.

It’s really as easy as that! But you know some people have to cause problems wherever they go…

So, what annoys people who work on airplanes for a living?

Here’s what folks had to say on AskReddit.

“Poking or grabbing at me to get my attention!!

And it’s usually on my as** as it’s eye level with most people haha. But for real DON’T poke people! Especially if I am speaking to another passenger. I can see you waving at me I’m not going to interrupt my assisting someone else because you want me to take your trash, just give me a second and I’ll come to you next.

I promise can hear you if you say “excuse me!” Or “Miss!” Or even wave a little in my direction. There’s just no need to touch people or grab at them.

Once I was so irritated at someone’s incessant poking, I turned, looked them in the eye and poke poke poked them right back and said, “what do you need.””

When the plane is delayed or there’s a cancellation and passengers blame us! Honestly there’s nothing more we want than getting you on the plane to your holiday or back home but if there’s something physically wrong with the plane we will not risk everyone’s lives.

Shouting, screaming and cursing at us won’t change the fact that the plane is still broken!”

“Leaving a ridiculous amount of garbage behind.

Last week I had a couple spit huge globs of gum onto the floor and then step on it to try to rub it in.

Don’t have s** in the bathrooms y’all. No, you aren’t being very quiet and yes we will know and depending on the airline policy we’ll also have to politely ask you to knock it off and keep it in your pants.

Not to mention the obvious – airplane restrooms are ridiculously tiny, to the point where once on one long haul we had to make an emergency landing because a large couple couldn’t get out of the restroom they had shoved themselves into once they were done.

I’ll add that this is THE grossest place to possibly want to do the deed, as restrooms NEVER GET DEEP-CLEANED, EVER (between same-day legs)

Ugh, and please don’t jerk your partner off while you’re both in your seats, with OUR COMPLEMENTARY BLANKET(!!!).

I know what your hand motions mean and I will have to come over and shut it down, especially because in most cases there are families with kids sitting behind or near you.”

“The stories I have….which honestly anyone who’s worked any type of customer service knows what’s up.

My personal favorite. College athlete showed up late to flight, told couldn’t board, yelling, screaming and cursing all employees. Bringing her race up as reason they aren’t letting her on….you know the works.

The competition she missed the flight to was Olympic tryouts. How late was she you ask? She showed up two hours after the flight left…”

“They mayor of LA was coming though so they shut the gate down for security reasons.

Jay Leno was there for some reason and was screaming at my mom because he was not getting the same treatment as the mayor.”

“After a flight I usually stand by the flight deck and say good bye to the passengers as they exit.

I get a lot of people that ask how old I am. That doesn’t really bother me (I’ll probably be sad when it stops), but please don’t touch me as you are saying it. Seriously, strangers trying to pinch cheeks and pat my head.

Lady, I’m not your grandchild, I’m your captain.”

“Used to fly 50 seat jets for a regional. Flew with some captains who hated hearing “wow this plane is really small” as passengers boarded.

“It would look pretty big parked in your driveway” was my favorite response I heard. The plane was 100′ long and weighed 50,000 lbs so yeah I bet it would.”

“Ex EK cabin crew here. Honestly the most annoying thing is when passenger don’t follow safety protocols as we get ready for landing. Things such as…

There are a lot to do to prep a long haul flight for landing and once we start decent, there is a limited time to get everything done. Passengers who don’t cooperate definitely are the most annoying. There were times where I got to my jump seat right before landing on the runway.

I saw a reply above on running out of food choices. One time on a flight to New Delhi, in economy we ran out of vegetarian meals 2/3 way through because catering underestimated the demand.

We then ran through the crew meals to gather all the vegetarian options and gave those out to passengers. While planes aren’t restaurants, we definitely did our best to accommodate the passengers as best as we can.”

We have no control over that…we just fly planes and keep you safe aboard.

We understand we’re the face of the company you see at the time, but really it’s out of our hands.”

My worst experiences with customers is when the weather is bad and we have to either wait or make a no go decision. My personal favorite is the guy who screamed at me while I was in the terminal getting coffee because his flight wasn’t leaving on time.

The whole northeast was shut down for thunderstorms and low ceilings, but his iPhone said it was ok for us to go so he had to tell me how bad I am at my job.

As a passenger don’t say “thanks for finally showing up”. One it’s incredibly rude, two you may only have one flight that day but I probably had four. Chances are I was delayed because of a another flight or maintenance on some other plane.

Added to that we often only get 45 mins to an hour between flights which ends to requiring us to literally get off one right onto another. We have to grab food or maybe use a real bathroom in that time also.

Don’t ask if we were out late last night drinking. You may say it as a joke and think it’s funny but we have to take those comments seriously. There is a chance that comment will force the pilots to go take a breathalyzer and your flight may be delayed or canceled. If you honestly smell booze speak up. If not it’s not funny and keep your mouth shut.

Not an annoyance but I do love the look on peoples faces when I tell them “sorry I don’t know where the nearest X is, this is my first time at this airport”. We don’t pre plan and memorize the layouts of the terminals at every airport in the world.”

“Former flight attendant here… 15 years I’ve seen it all! (and sorry for formatting, on mobile)

Walking throughout the aircraft barefoot. Especially into the toilets… Those floors are not as clean as you think they are!

People who talk to us and treat us like scum. And yes, we’ll provide better service to the ones who are nice, or think of them first when a whole row is free and they need to lie down and sleep during an 11hr flight.

Parents that don’t watch their kids during the flight. The aircraft isn’t childproof and there’s a surprising amount of things they can injure themselves on.

Passengers who do aircraft yoga during the service. By all means if lights are off and it’s quiet go ahead, but if there’s a buzz of activity near the galley then maybe wait a while.

Speaking of which, assuming the galley is a free for all. Sometimes we don’t get provided crew food for work and bring our own. If we’re busy attending to a call bell and can’t finish out snack or whatever… Its not for you to just grab and eat… At least ask first!

Complaining about how rough the flight was. I’ve had some cuss out the flight deck about their abilities because the aircraft hit wake turbulence… If you can magically see wake turbulence on a tiny monitor and think you can do a better job then join a flight academy, pay several thousand dollars for the training and certification and do it yourself…”

What annoys you when you fly?