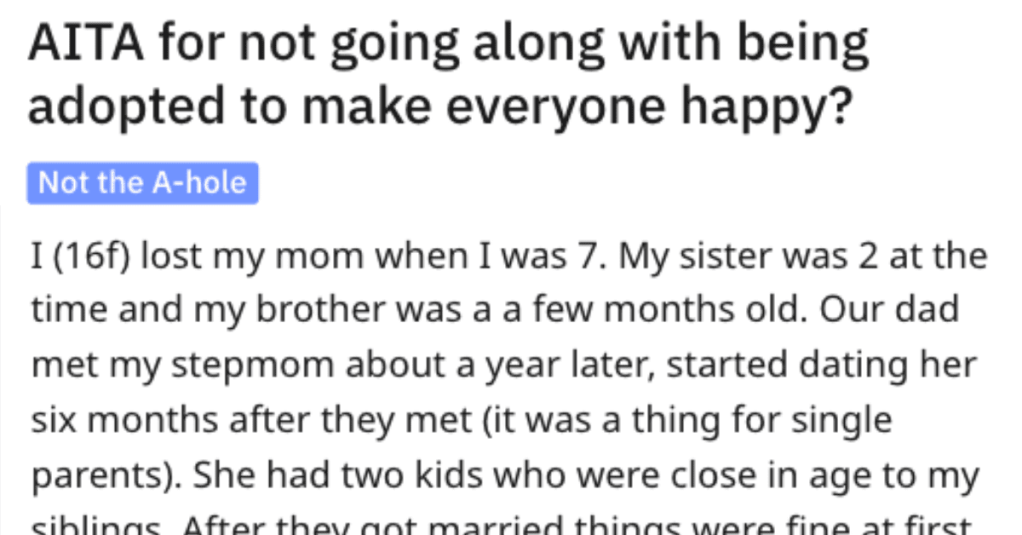 Family dynamics are hard, especially when you’re a teenager.

But when you’ve lost someone close to you, or you live in a blended family, there really are no clear cut answers in life, as shown in this recent AITA conversation.

AITA for not going along with being adopted to make everyone happy?

I hate to post here because I know there are so many of these but I really need to hear what you all think.

I (16f) lost my mom when I was 7. My sister was 2 at the time and my brother was a a few months old. Our dad met my stepmom about a year later, started dating her six months after they met (it was a thing for single parents). She had two kids who were close in age to my siblings. After they got married things were fine at first and then they wanted to adopt each others kids. Her kids were excited as were my siblings but I did not want to be adopted. This wasn’t made into a huge deal but they really quizzed me on why and tried to figure out if they could change my mind. They weren’t able to and I know this really hurt her feelings. Over the years it was let go. They adopted the other kids and everyone was happy. Or so I thought. It seems like it made them unhappy I said no to the adoption and my siblings have wondered why I didn’t want to be adopted too.

I love my stepmom. I get along with her really well. I think she’s great. But I don’t love her the same as I love my mom or dad. It’s different with her. Not bad just not as close. And that for me was reason enough to not be adopted. But there’s also the fact I don’t want my mom’s name erased from everything. I know they’re not trying to replace her but if I’m adopted her name is no longer the legal name I put down, it doesn’t change biology but it does make my stepmom my mom and no matter how much I care about her I just don’t want her to be my mom in all official senses of the word.

It has come up again because they offered the adoption again and my answer was the same. My dad decided we needed to go to therapy (the three of us) and the therapist told them they couldn’t therapy me into agreeing. My stepmom said it’s not about that for her, she just wants to know what she did wrong, and why I’m opposed. My dad said he feels like I’m holding back and he said there is an unhappiness with the fact I have kept myself on the outside by not becoming a more official part of the family unit.

It bothers me. But part of me feels bad that this is something that makes them so unhappy.

So many feels on every side of this one. The original poster went on to add:

I feel like I could be the asshole because I know how much this means to them and I know it might make some things easier for them if we were all legally the kids of both my dad and stepmom.

Readers, however, felt differently, and the consensus was strongly in favor of the teen.

Many reacted negatively towards the parents, labeling them as the real problems in the situation, such as this respondent who felt the parents should back off: 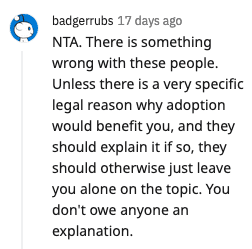 And this one, who agreed that the parents were drifting towards AH territory themselves. 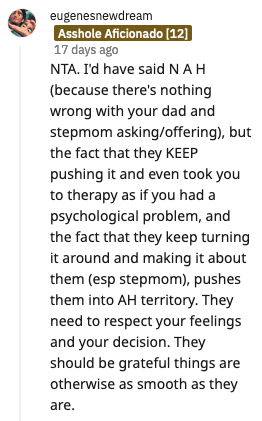 Others pointed out that everyone’s heart was in the right place, and the family just needed to continue working to understand each others’ points of view: 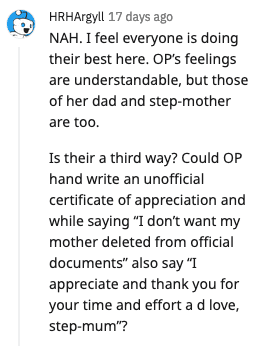 Many shared their own similar experiences, including a widow who sided with the teen: 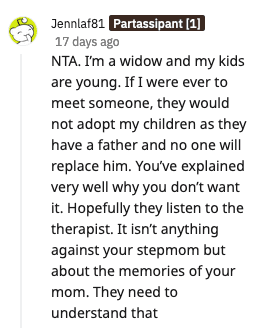 An adult chimed in with a story about their friend, who chose to be adopted later: 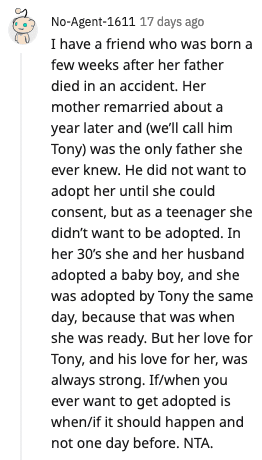 And another shared her painful story of giving into the parental pressure: 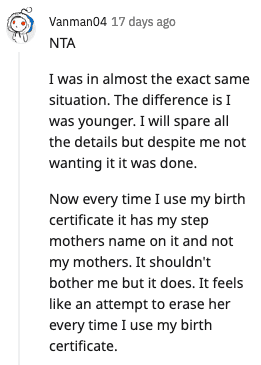 But while many expressed their dismay at the parents’ insistence, a few readers offered a potential explanation for their behavior:

There’s no right or wrong answer here, but two things are clear. Adoption is a very personal matter for both the parent and the child, and people can’t just change their feelings to suit others.

What do you think? Let us know in the comments.