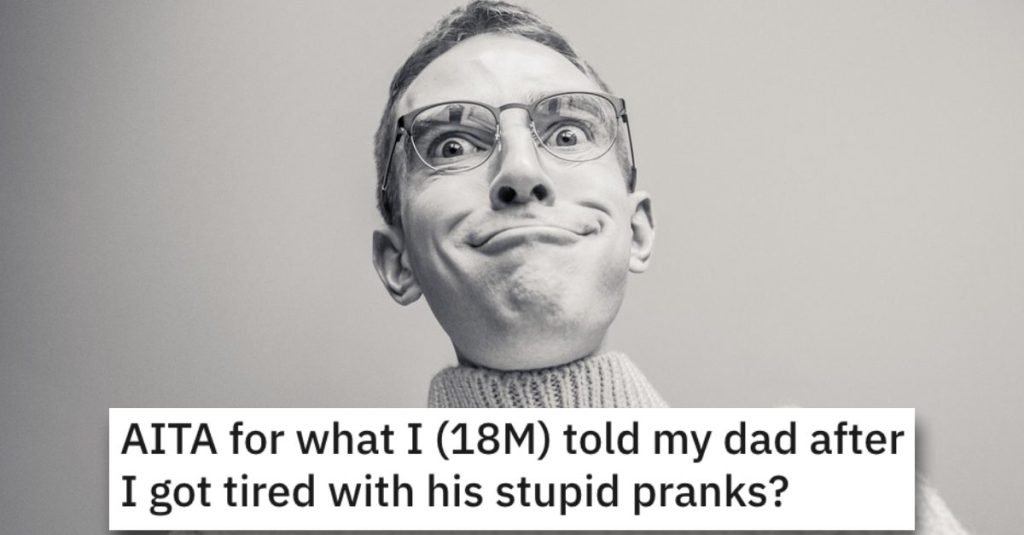 He Feels Bad About What He Said to His Dad After a Prank. Did He Go Too Far?

Pranks can be a lot of fun but they can also be over-the-top and totally annoying.

And if someone pulls pranks too often, that can get really old really fast.

Check out this story from Reddit’s “Am I the A**hole?” page and YOU decide if this teenager went too far after his dad pulled yet another prank…

AITA for what I (18M) told my dad after I got tired with his stupid pranks?

“My dad has been annoying the hell out of me with this stupid s**t for years.

He acts like a **cking teenager I swear sometimes I feel like I’m more mature than him. My mom’s yelled at him a few times too because he also does it to her. He really doesn’t know how pranks work or when to stop.

It used to be dumb annoying stuff like giant fake spiders/roaches in the fridge or around the house, hiding in the shower to scare one of us. But honestly he taking it too far.

Some examples he’s done to me for way over a year: taking all clothes from my drawer and hiding it all over the house so I can’t find it in the morning (has done it 4 times), putting whipped cream all the way inside my shoes so I can’t until after I put them on. I’m lactose intolerant so one time he switched my almond milk out before I used it to make pancakes, it had me with mad runs all day.

My dad apologized for that one but the whole family was mad at him for a few weeks so he stopped with the pranks. It’s not like if we don’t talk about it. He says we’ll laugh about it in the future but really I don’t see that happening and told him there other ways to make memories than p**sing everyone off. A million times I told him to stop because all it’s doing is making me not wanna be around him.

All this week I’ve had job interviews lined up since I’ll be able to start working full time after I graduate in a couple weeks. I even bought a whole suit and tie to look more professional. Before I was leaving he ask me to help him take groceries out of the car cause he had to go to the bathroom. Instead he dropped a water balloon on me from the window when I was coming back in.

For the first time I was ready to cuss him out that’s how mad it got me. It made me more p**sed because he was laughing recording it on his phone telling me not to get too mad and I can use one of his shirts for my interview.

It wasn’t even that though. This was my own nice suit I bought with my own money the interview was gonna be soon. But I didn’t cuss just told him this is why he’s not gonna hear from me after I move in a couple weeks and just think about that.

He Told me to stop being dramatic but I still kept going. Just so he doesn’t wonder why I don’t like him anymore this is why so he better be ready to get blocked after I’m gone. His reaction made me feel good because he was very serious. He didn’t even tell me anything when I left or after when I came back.

Ever since he’s been serious tho. He’s not even talking when we have breakfast, doesn’t smile and I don’t talk to him either. My mom says that seriously hurt his feelings an i shouldn’t say stuff like that when that’s just his way of tryna have fun with us. But I’m not seeing how telling him what’s gonna happen is wrong. I’m fed up.

Does it make me an a**hole for hurting his feelings in that way tho?”

This reader said this guy is NTA for reacting the way he did. 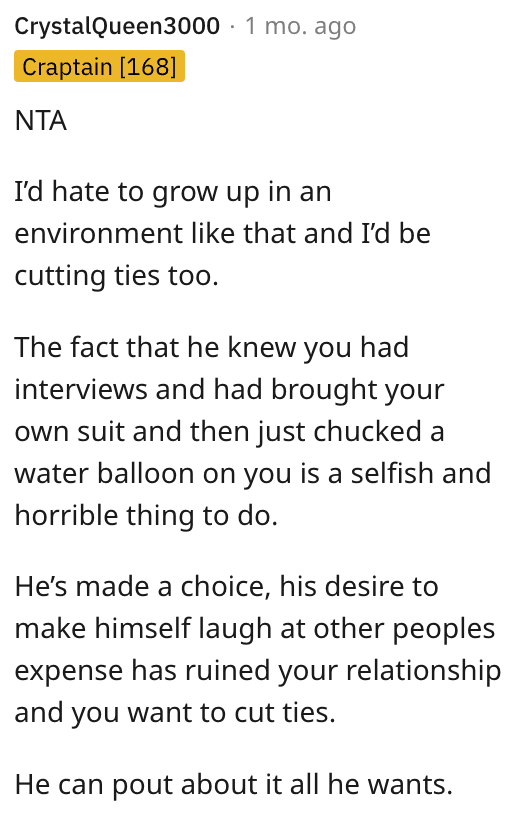 And another individual made a good point about jokes hurting people. 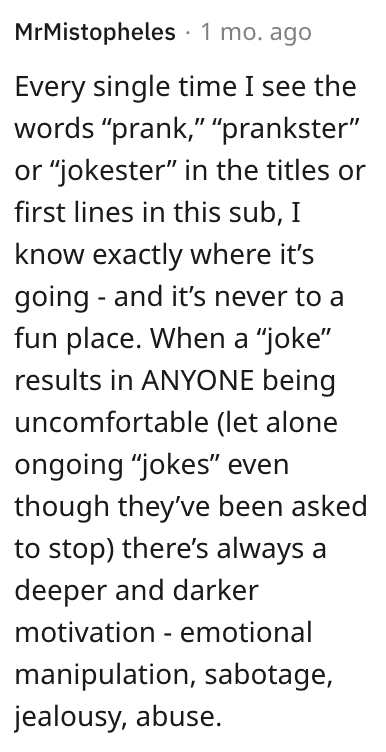 And this Reddit user said this guy should cut his dad off for this “prank”.