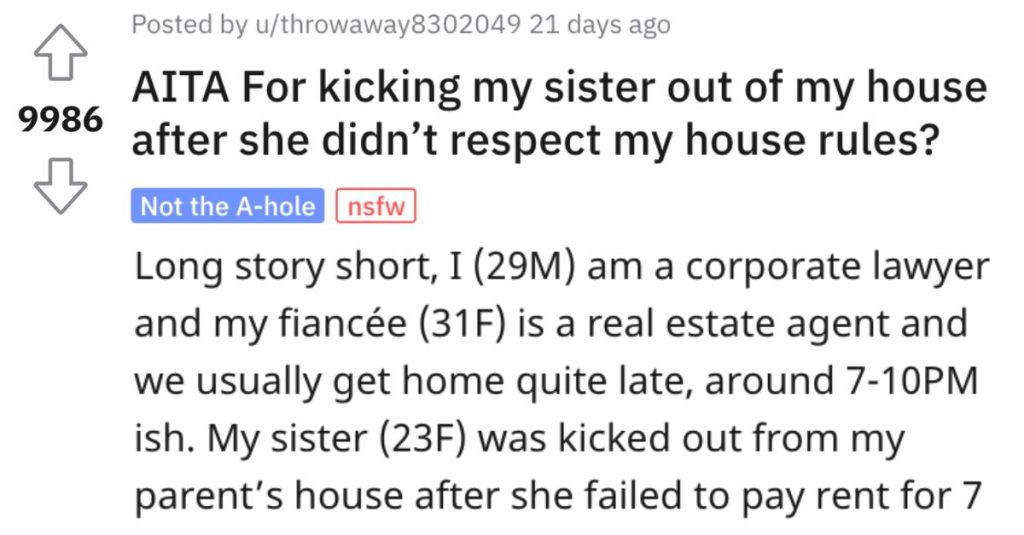 He Kicked His Sister Out Because She Didn’t Respect the Rules in His House. Did He Go Too Far?

My house, my rules.

I think everyone should follow those rules, but what do I know…?

See what happened in this story and let us know in the comments if you think this person stepped over the line.

AITA For kicking my sister out of my house after she didn’t respect my house rules?

“INFO: Me and my fiancée have a king size bed + both of us are somewhat of a germaphobe and we usually try to clean our house everyday to every two days.

Long story short, I (29M) am a corporate lawyer and my fiancée (31F) is a real estate agent and we usually get home quite late, around 7-10PM ish. My sister (23F) was kicked out from my parent’s house after she failed to pay rent for 7 months and we offered her to stay at our house for the time being.

Our house rules were pretty clear, not to touch any of the drawers in mine and my fiancées room and nor to sleep in it at night as we have 2 guest rooms fully decked out and also the fact that when we come home we are pretty tired and usually want to sleep right away and also she has to clean her room and has to throw away her garbage.

For a few weeks she followed our house rules but all of a sudden one day my fiancée came home earlier then expected at 5:30 PM-ish and found my sister and her girlfriend in our bed doing the ‘devil’s tango’. My fiancée got enraged and kicked her girlfriend out of our house and warned her to never do it again or she would be kicked out.

We thought she had learned her lesson and would never do it again but last week me and my fiancée had a function to attend to and we told my sister that we might be late. When we were traveling to the function my wife started to feel sick and we drive home immediately. When I opened the door but it was unlocked. I thought my sister had forgotten to lock it.

My fiancée rushed to our room heading for the washroom but when she opened the door she found my sister and her girlfriend tangling in our bed again. She got furious, and kicked both of them out and told my sister that if she couldn’t adhere to basic decency she wouldn’t be allowed here.

The day after, I packed all of my sister’s belongings and dropped it to her girlfriend’s place. When I tried to talk to her she called me and my fiancée a**holes for kicking her out and was mad at me for ‘abandoning’ her when no one was there for her.

This person said he’s NTA and that this whole thing is just weird. 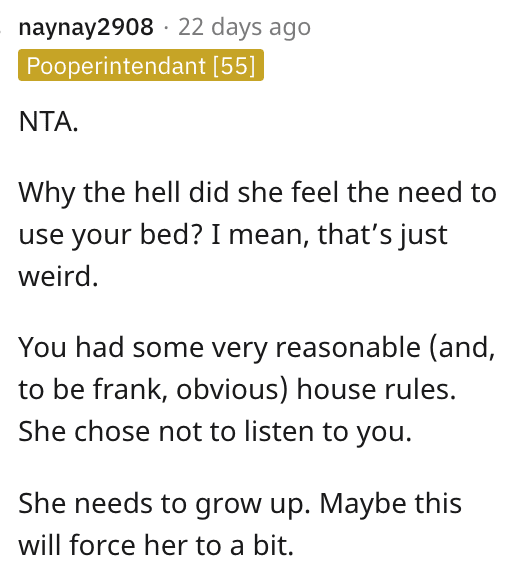 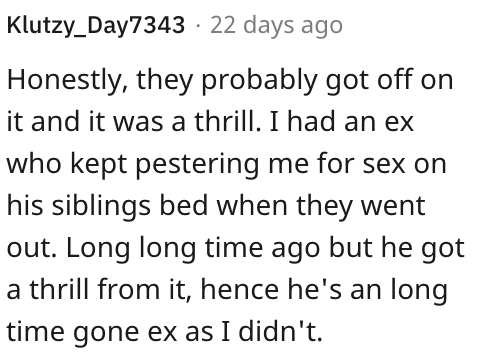 This individual said the one common denominator in this story in the man’s sister.

Tell us what you think about this story.