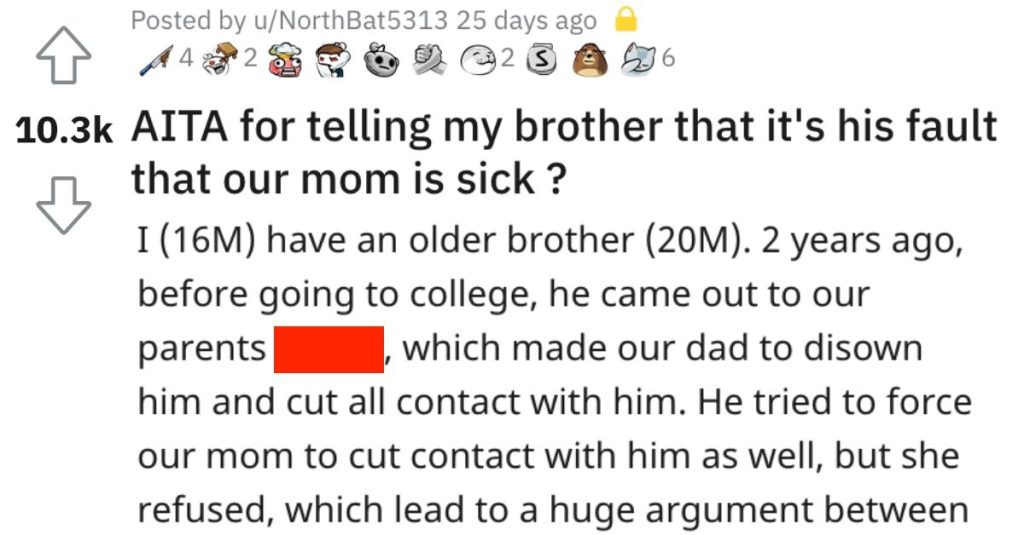 This one hurts…but is it true?

A teenager told his older brother that he’s the reason for their mom being sick and now he wants to know if he took things too far.

Check out this story from Reddit’s “Am I the A**hole?” page and let us know what think.

AITA for telling my brother that it’s his fault that our mom is sick?

“I (16M) have an older brother (20M). 2 years ago, before going to college, he came out to our parents as gay, which made our dad to disown him and cut all contact with him.

He tried to force our mom to cut contact with him as well, but she refused, which lead to a huge argument between them. After a couple of months of almost daily fights, our parents eventually decided to divorce. Soon after, mom started feeling sick and she was eventually diagnosed with breast cancer in stage 3. Dad was only paying for my alimony and refused to pay for my mom’s treatment as well and my brother obviously couldn’t pay either cause of his college taxes.

My mom’s disease progressed and now the doctors estimate that she only has 1, max 1,5 years left to live. My mom accepted her fate, but I honestly started to resent my brother for this, as I don’t see what was the point of him coming out right before going to college in another city, it’s not like our dad wouldn’t been able to keep track of who’s dating once he moved there and his coming out only caused problems in the long run.

My brother told me on the phone that he feels so bad about our mom’s situation and he blames himself for not being able to help her, which made me told him that he should blame himself for coming out to our homophobic dad, which destroyed our parents’ marriage and probably even got our mom sick of cancer due to all the stress caused by the divorce.

My brother told me that he was still hoping that our dad would come around and that he wouldn’t have done it if he knew it was gonna cause our parents’ divorce, but I told him that the harm’s already done and it’s his fault that our mom’s sick now. He started crying and told me that I’m a cunt for thinking that his s**ual orientation is what caused our mom’s cancer and then hung up on me.

But honestly, if he hadn’t come out, our parents wouldn’t have divorced and even if mom would’ve still get cancer in this case, at least dad would’ve been there to pay for her treatment and thus he might’ve still been able to save her, so I really think my brother should’ve postpone his coming out for a couple more years at the very least.

This reader made no bones about what they think about this guy.

And another individual said this guy is the a**hole…but they have some sympathy for him. 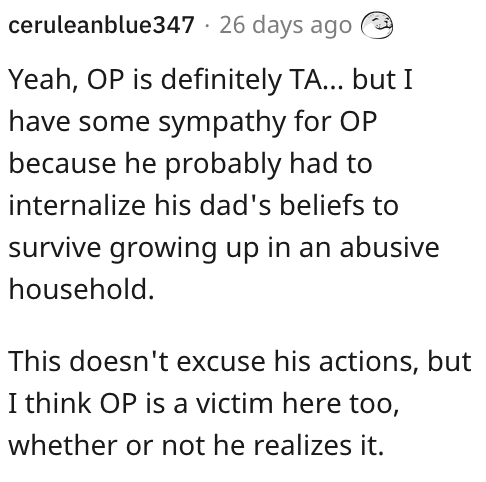 And another Reddit user said they have no sympathy for this guy. 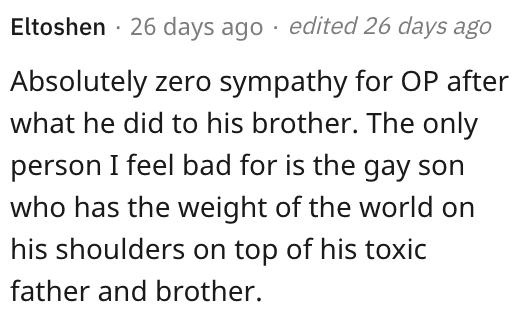