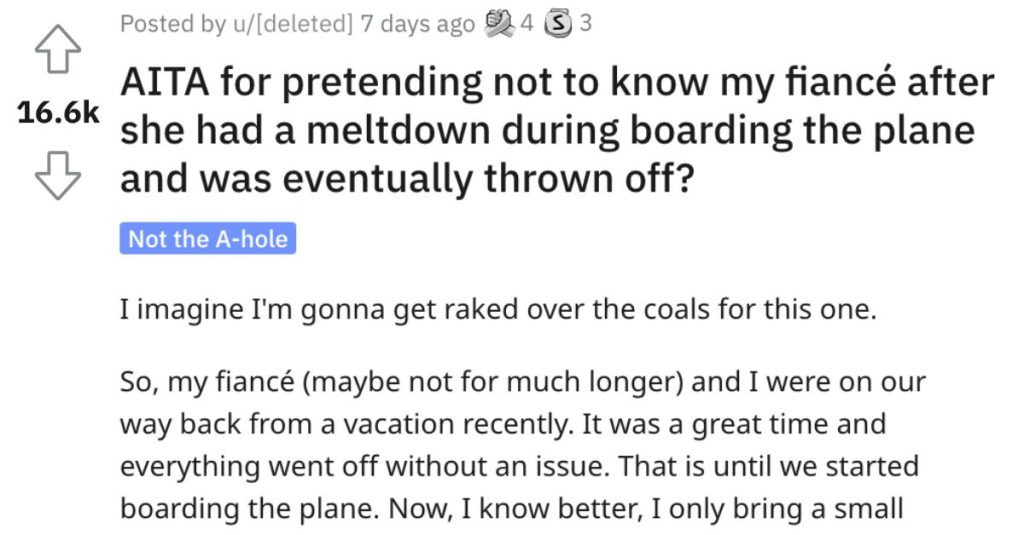 He Pretended He Didn’t Know His Fiancée When She Got Kicked Off of a Plane. Is He a Jerk?

I don’t think I know you…

But let’s get all the details and see if we think this guy acted like a total a**hole or if he was justified in his actions.

Take a look and see for yourself!

AITA for pretending not to know my fiancée after she had a meltdown during boarding the plane and was eventually thrown off?

“So, my fiancé (maybe not for much longer) and I were on our way back from a vacation recently. It was a great time and everything went off without an issue. That is until we started boarding the plane.

Now, I know better, I only bring a small backpack with essentials incase I don’t get my checked bags. I can survive out of this backpack and it will always pass baggage check for size and weight (done a lot of traveling so why fight the system).

My fiancé didn’t wanna listen to my advice and chose to bring basically a regular full-size bag that barely fits the standards of carry on, but generally speaking the airline worker doesn’t wanna deal with the trouble and allows it through.

But this time the airline worker was not having it. It was a packed flight, we were boarding last in economy and it was just a s**t show. I got through just fine first with my little backpack, but I could hear the argument from the boarding tunnel thingy and it was getting heated. I was about to go back and try to smooth it out but my fiancé rushed pass and just boarded plane, I assumed not having heard it super clearly that the attended had given in and let her on. That was not the case!

So we found our seats and settled in. I was pretty tired and I could tell she was upset so I just kinda tucked into the window and put my hat down and tried to take a nap. But soon after the airline worker and a cop shows up and they are not f**king around, and want her off the plane.

She tries to plead and cry, etc. but they are not having it. And maybe in a moment of panic or just plain self preservation…the cop asks if we’re together, and I blurt out, “NO!” shaking my head emphatically. I got kill dagger eyes from her as she shot up and grabbed her bag and followed the cop out. She was also swearing and screaming the whole way out.

Now, obviously this is well after the event I’m posting this. But when she did eventually get home (she caught next flight out with the bag checked, lol), I was there to pick her up.

She obviously thought I was the a**hole, and to be honest almost everyone I know thinks I’m an a**hole except my boss and co workers, who for context were very much relying on me to be back on time, which I gave my word I would, for a really important project that was time sensitive. They were all very happy I didn’t get thrown off too.

So, am I the a**hole for this self preservation?

One reader said he’s NTA and he should get out of this relationship while he still can. 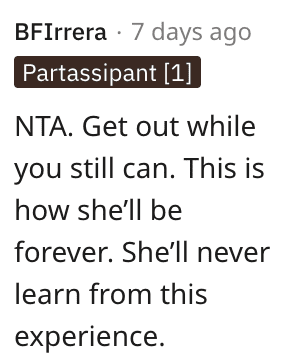 But another reader disagreed and said this should be a teaching moment for her.

And this Reddit user said this is her fault and a grown woman shouldn’t be acting this way.