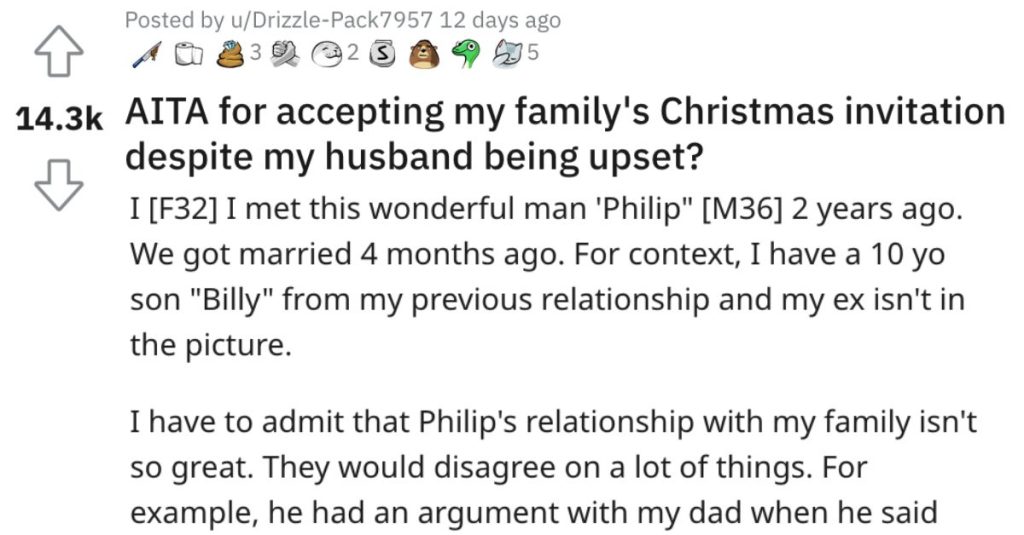 The holidays bring out the best in people…

And unfortunately, they also bring out the worst in folks, sometimes…

So is this woman a jerk for accepting her family’s Christmas invitation?

AITA for accepting my family’s Christmas invitation despite my husband being upset?

I have to admit that Philip’s relationship with my family isn’t so great. They would disagree on a lot of things. For example, he had an argument with my dad when he said that he was keeping their grandson away from them but Philip stated he wasn’t and that he couldn’t visit with Billy because he had work (I was sick at the time).

The latest argument was what made things worse. My mom and sister were discussing natural remedies (they’re into this stuff) for my niece and Philip (he’s a pediatrician) called both of them “ignorant” for not using meds instead which caused a huge argument and Philip being no longer welcome at my parents house.

Now they’d sent me and Billy an invitation for Christmas but did not include Philip which, I expected given how strained their relationship has become. I called my mom to confirm that I’ll attend but the minute Philip found out, he went off saying he could not believe I was fine with my family excluding him and then agree to go and leave him behind.

I told him it’s their celebration and I don’t get to decide their guestlist for them. And also, I’m not leaving him behind because we did not have any plans for Christmas. He said he thought that we’d “automatically” celebrate together the 3 of us but now I’m taking Billy away from him as well. I thought that was a bit melodramatic because it’s literally just few hours at my parents home but he insisted it was about principle and respect.

We had a big argument and I said that he basically alienated himself by continually picking arguments with my family, but he started ranting saying it wasn’t about the fact that they didn’t invite him, but the fact that I was willing to let him spend Christmas alone without me and Billy.

We went back and forth on the issue but do not seem to reach a solution. My parents are used to spending every major holiday with Billy. So you can see how much pressure I’m getting from both sides here.”

This person said she’s an a**hole and that her husband did nothing wrong here.

Another Reddit user agreed and said that her family sucks. 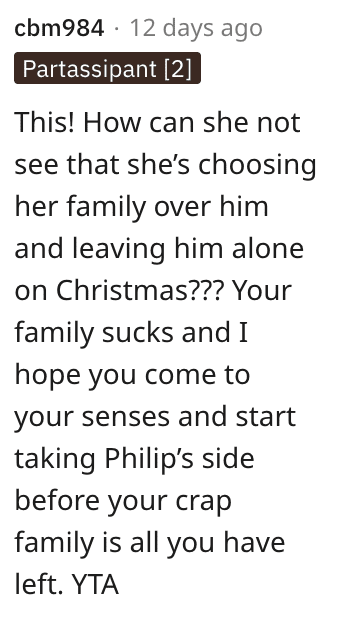 And this individual made a good point: she’s doing this to him and they’re practically newlyweds! 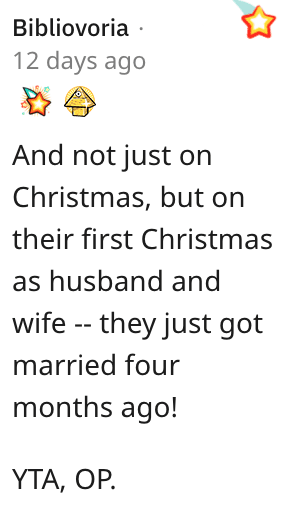