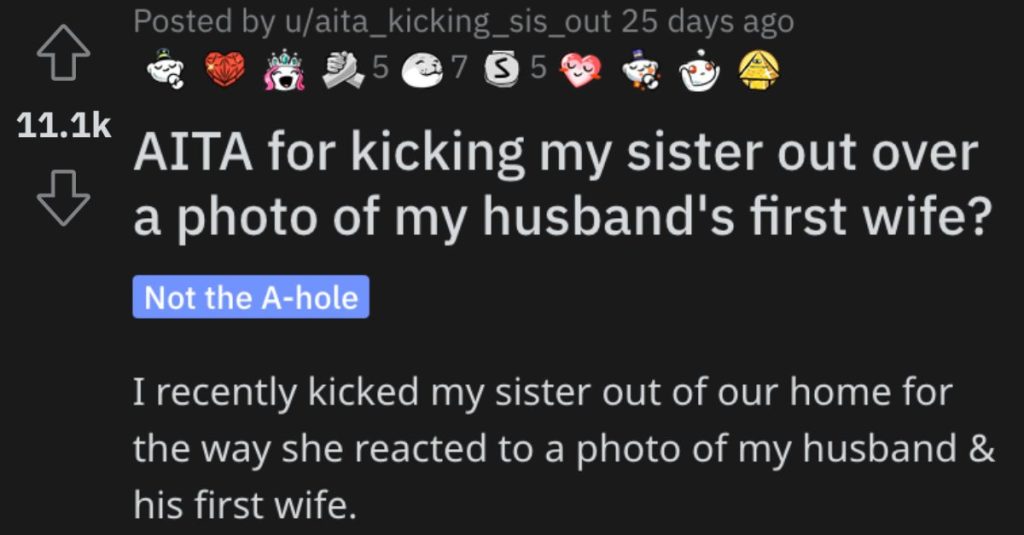 She Kicked Her Sister Out Over a Photo of Her Husband’s First Wife. Did She Go Too Far?

Yikes…this does not sound good at all, does it?

You can say that again!

But did this woman go too far when she kicked her sister out of her house?

Read on to get all the details and let us know what you think in the comments.

AITA for kicking my sister out over a photo of my husband’s first wife?

“I recently kicked my sister out of our home for the way she reacted to a photo of my husband & his first wife.

I met him a few months after she d**d in a car accident, got married 2 years after that. We’ve been together 6 years.

He was devastated when she d**d. I told him I never expected to “replace” her in any way & considered myself another chapter in his life. I was warmly accepted into the family and his circle of friends.

My sister recently she fell on hard times – lost her job, apartment, and so on. We took her in.

My husband has always had a home office. My sister was poking around the house when he was out, and discovered a photo of him & his first wife among the framed pictures he has. It’s not their wedding photo or anything, just a typical cute couple photo. It’s the only printed photo of her in the house, taken a few months before her accident. They didn’t have kids, so pics are all he has.

There are a lot more photos of us.

I was reading on the couch when my sister came stomping into the room, holding the framed photo.

She angrily asked “Why do you let him keep a photo of his ex in your house?”

I replied: “First, it’s our house, & second she’s not an ex. She d**d in an accident and was his wife for 8 years. She was a huge part of his life. He keeps that one photo out.”

She replied “An ex is anyone you’ve slept with who’s not in the picture anymore.”

Sis: “Doesn’t matter. So what if she got pasted by a truck, an ex is an ex. You shouldn’t be letting him keep any pictures.”

Me: “You’re being extremely disrespectful to me & my husband right now. You’re a guest in this house. Walk back those comments & apologize, now.”

Sis: “Why should I apologize? How can you let him keep pictures of an ex-f**k toy?”

I never knew his first wife, but I know how much she meant to him. I know how much he loves me. My sister talking about her like that insulted him, & by extension me – not to mention how disrespectful she was being to a poor woman who d**d young.

I didn’t care that it was November in MN, or that she didn’t have anywhere else to go, or any money. She had been beyond disrespectful to me and my husband, over a single small photo.

Me: “If you’re worried about sleeping in your car this winter, you should’ve thought of that before insulting the people sheltering you.”

I made sure she was gone before my husband even got home. He was shocked when I told him what’d happened, since he’d always had a polite-neutral relationship with her. He thanked me for having his back.

I got a call from my mom, telling me it was my responsibility to take care of my sister. I laughed and hung up.

I’ve been asked by a few people how I could basically destroy my relationship with my sister over this, and have replied that she was the one who did so.

AITA for how I handled this?

Now let’s see how Reddit users reacted to this.

This person said she’s NTA…and they shared part of what is going on in their own life.

And this individual also said she’s NTA and that her sister’s behavior was wrong. 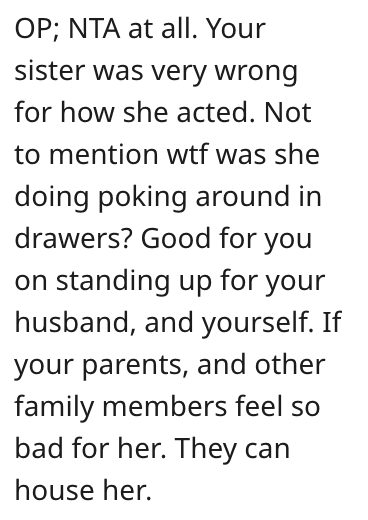 And this indivdual agreed that she’s NTA and that she did nothing wrong. 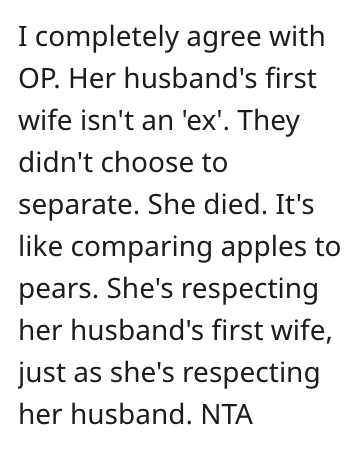