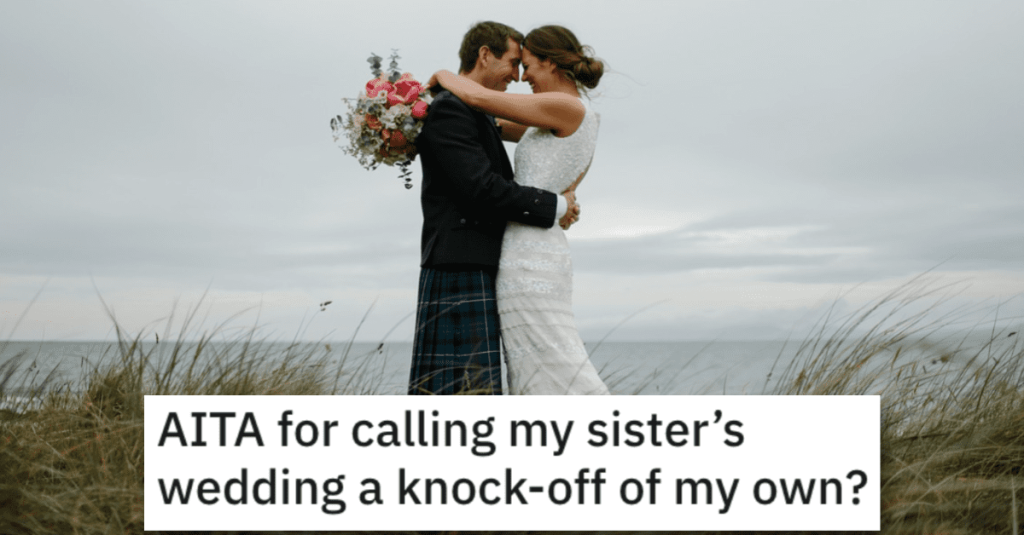 He Told Her Sister That Her Wedding Was a Knock-Off of His. Is He a Jerk?

The competition between siblings never ends, does it?

And that rivalry definitely pops up from time to time when it comes to weddings.

So is this man a jerk for telling his sister that her wedding was a knock-off of his?

AITA for calling my sister’s wedding a knock-off of my own?

“I have always been “the favorite” among my siblings.

As the baby of the family and the only boy, I got doted on a little extra. This extra doting increased when I expressed an interest in dance and actually discovered a talent for it. This makes sense in my mind: my schedule required more time and money devoted to it since I now had to be taken to classes and showcases, needed the proper attire, etc.

There were a few years of tension between my sisters and I, especially during our teen years, where it seemed like they blamed me for what was going on or expected me to apologize for our parents’ choices – something I adamantly refuse to do.

Tensions seemed to ease some when we went our separate ways. My sisters stuck around in our home town to get jobs while I moved to a city about an hour away for college. I met my now husband there and despite what my parents tried to talk us into, we got married in a tiny ceremony at the local courthouse where only immediate family was present.

We had a party with our close friends and family later to celebrate, but the ceremony itself was just like we wanted: a small part of an intimate and peaceful day focused on my partner and I. My oldest sister got engaged a couple months ago, and my parents jumped at the chance to start planning an over the top wedding.

I’ve been around for some of it and a lot of what is being offered to the new happy couple is what was suggested to my husband and I when they were trying to convince us to have a big wedding. This didn’t bother me at all. In fact, I was happy my sister was getting what seemed like the wedding of her dreams.

Unfortunately, it seems she’s still holding a grudge over what happened when we were kids and has made multiple jokes about how “she’s the favorite now,” and that this is “payback” for all the things she missed out on when I was being chauffeured to dance practice. I took the first few in stride, but it’s getting tired now that it’s been repeated so many times. I recently told her the jokes were getting old, but that still didn’t stop her.

I finally had enough last night and after a few drinks at a little weekend family get together, I told her that her wedding was essentially a knock-off of mine, and that I doubted our parents would be putting this much effort in had I gone through with the extravagant plans they had wanted me to a few years ago. She left the room in tears and I’ve gotten mixed reactions from family over what I said.

Let’s see what Reddit users had to say about this.

One person said he’s an a**hole and it sounds like it’s always been this way.

Another Reddit user said his siblings have had to deal with his BS their entire lives. 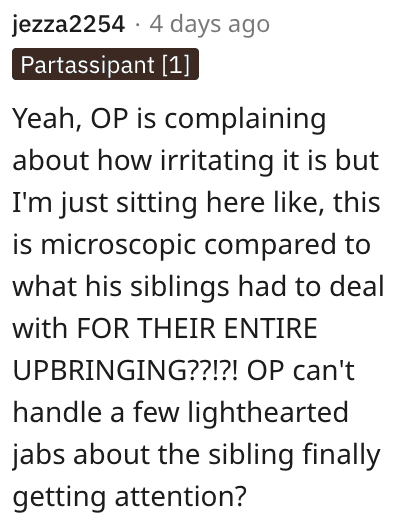 And this individual said he’s an entitled a**hole. 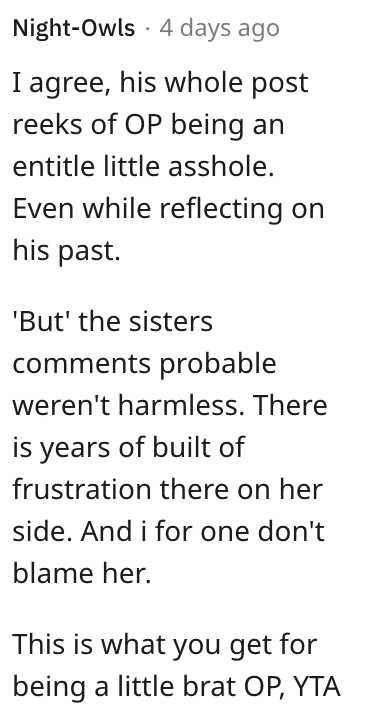