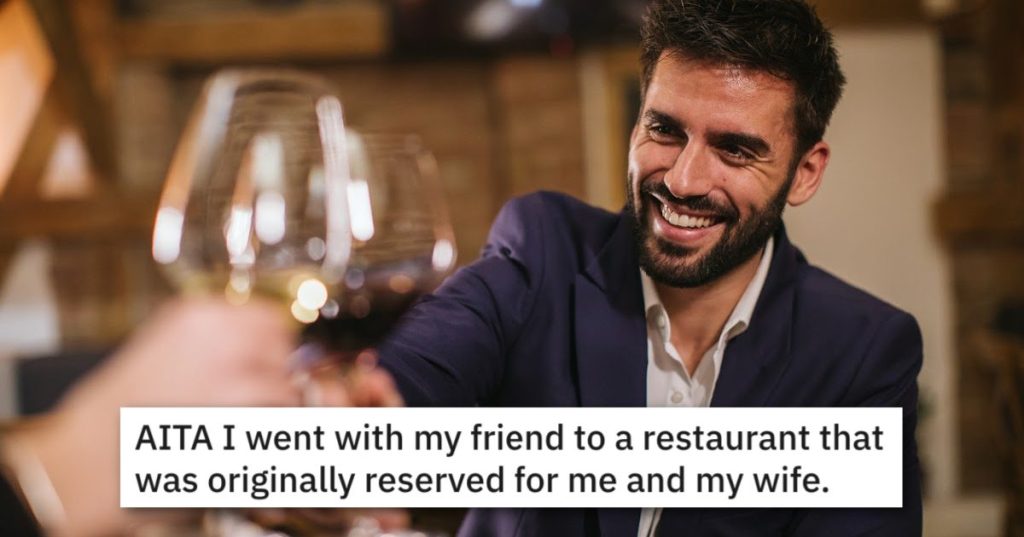 No one is going to argue that relationships are easy. That said, I think that prioritizing your partner on a special day like a birthday or an anniversary is a no-brainer for most of us.

This man had a birthday coming up. His wife is pregnant, which likely means it’s the last one where they’ll be able to easily spend it together, just the two of them.

That said, even though the two of them had plans and dinner reservations, she decided to spend the night with an old friend who was in town for a short time instead.

OP let her know that hurt his feelings, as her friend would be in town for a couple of weeks, but she said she’d already decided and left.

Yesterday was my birthday. My(30M) wife(28F) and I had made reservations at this really nice Korean BBQ restaurant for dinner. My wife is 4 months pregnant.

However, her friend wanted to hang out with her and had called her the night before my birthday. My wife said that this was a childhood friend of hers and that she really wanted to spend time with her. I reminded her that it’s my birthday but she just dismissed it saying my birthday comes every year but her friend will be leaving for Germany in a few weeks.

I told her that she could go after my birthday as well but she did not listen and just went to a sleepover at her friend’s place.

Instead of waiting to hash it out with her, he invited a friend to spend the day with him instead. They enjoyed their time and used their reservation for dinner as well.

I got really mad at her and instead of waiting for her to return home to talk things out, I asked my friend if he would like to hang out with me. He was fine with it so we spent the day fishing, grilling, hiking, and went to the Korean BBQ for dinner.

When his wife came home, she was upset that he’d used their reservation. When he told her that he’d found someone to prioritize him on his birthday because she didn’t, she tried to turn the tables and call him manipulative.

When she came home after spending time with her friend, she apologized to me saying it was an unavoidable circumstance. I told her that it wasn’t a problem and that I spent the day with my best friend.

She got mad that I’d take him to the restaurant that we had booked for ourselves. I said that it was originally for us but since she prioritized her friend over me, I took the person who prioritized me on my birthday.

She said that I’m controlling and that I shouldn’t be deciding who she spends time with.

Now he’s wondering if he was in the wrong and somehow telling her who she could spend her time with, and asking Reddit to weigh in.

Now she’s neither talking to me nor coming out of the room. I think I went too far by telling her whom she should be spending time with.

It definitely seems as if this could be what’s going on. 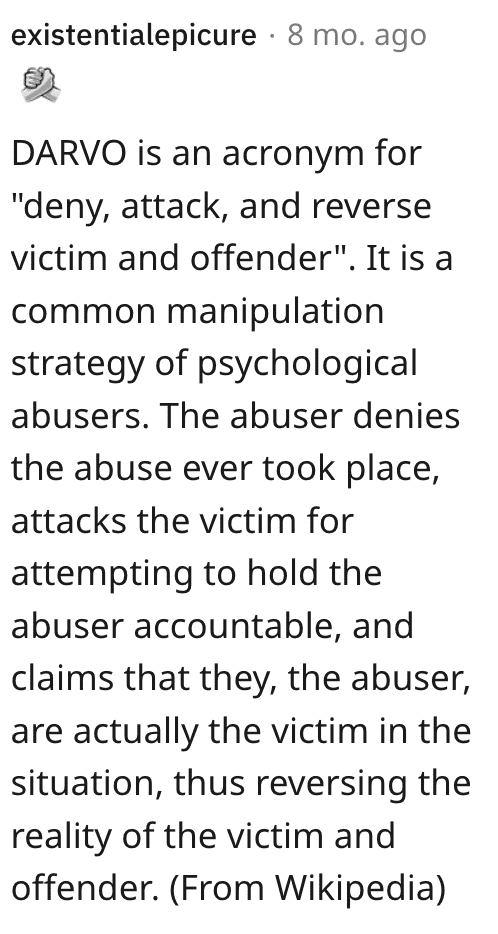 This person isn’t sure she was hanging out with a friend at all. 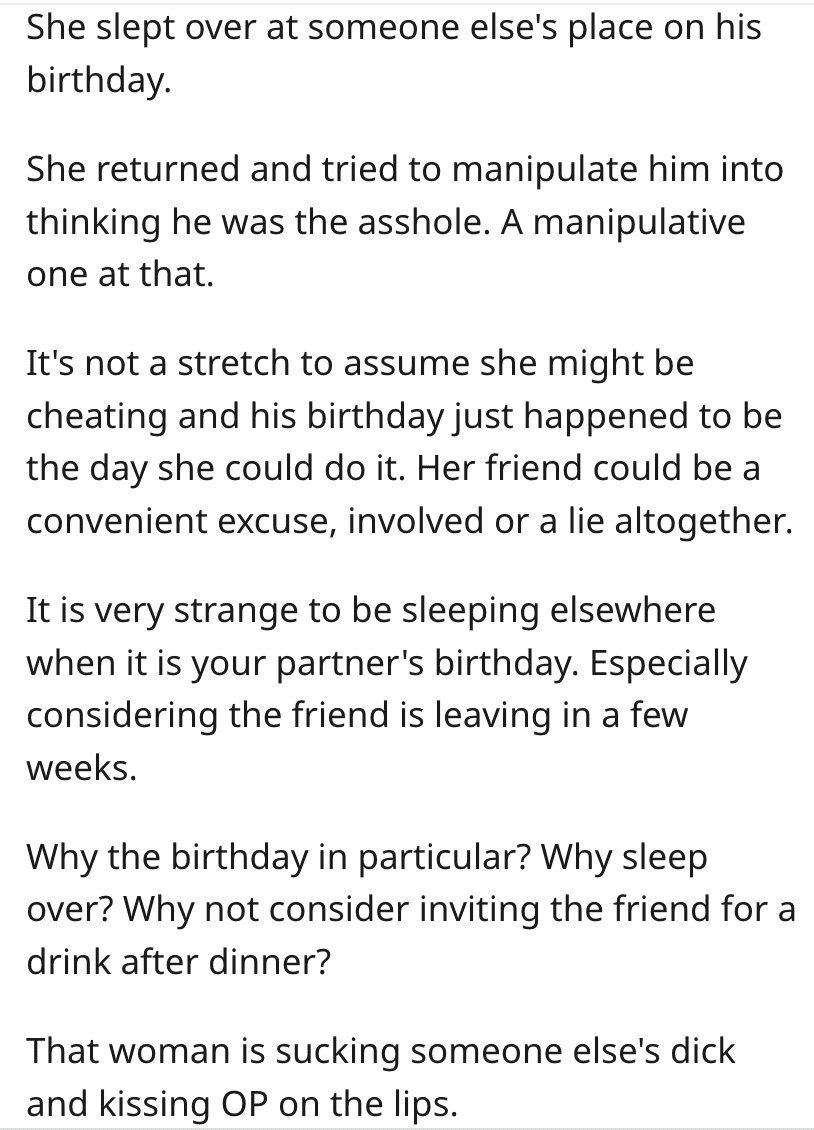 There’s definitely a bit of pot and kettle situation going on with her. 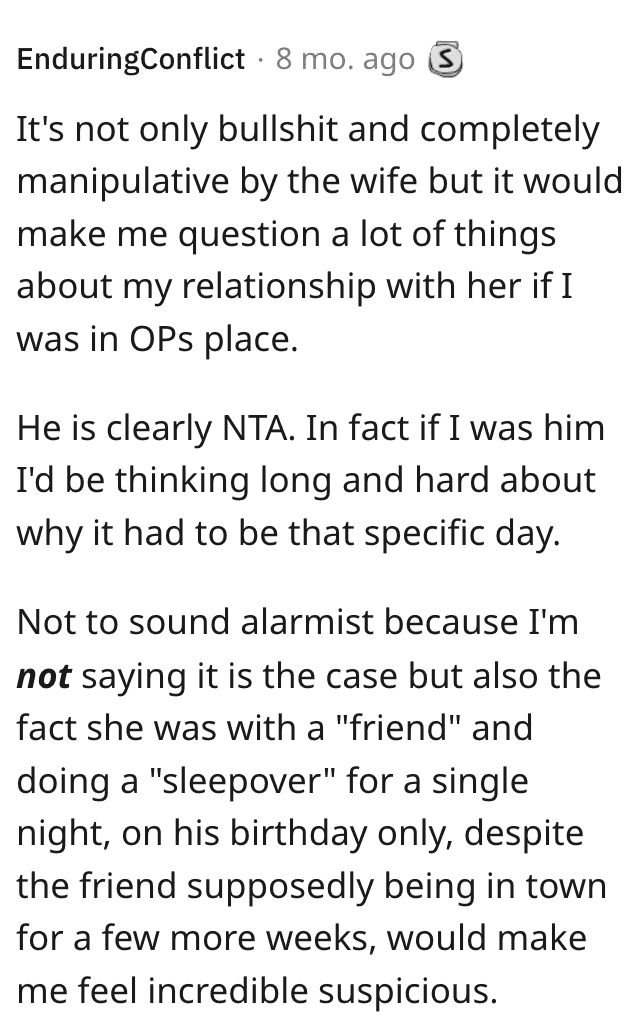 I think we’re all feeling a little suspicious, no? 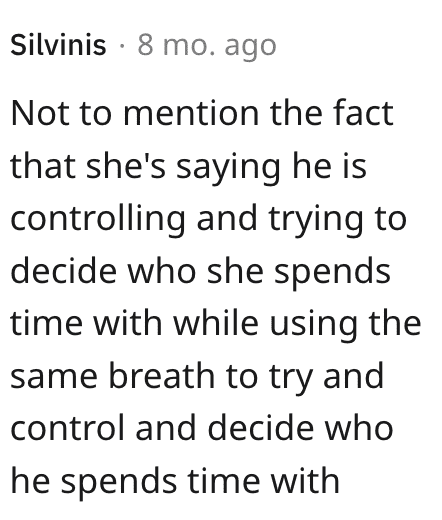 Basically, we all have a lot of questions. 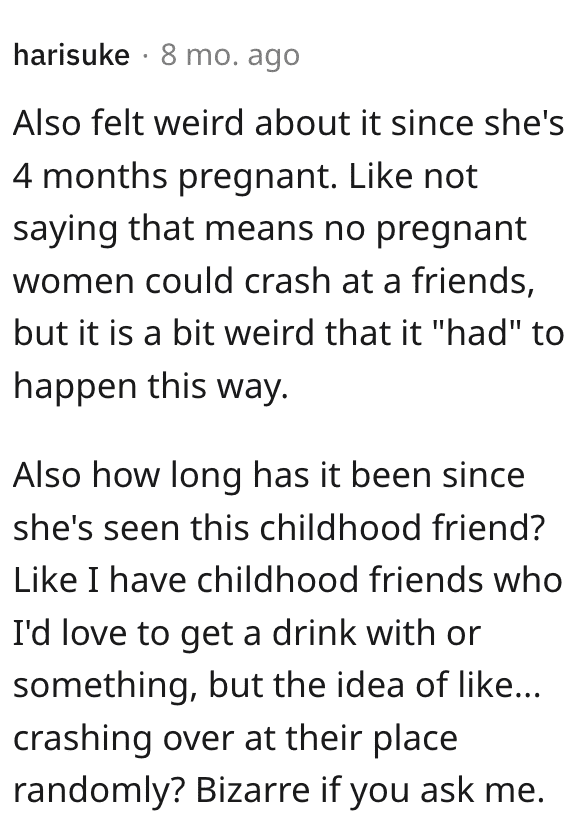 I’m not sure what’s going on here, but I hope OP reads the comments and realizes that he did nothing wrong.

What do you suspect is happening? Let’s let the theories fly down in the comments!