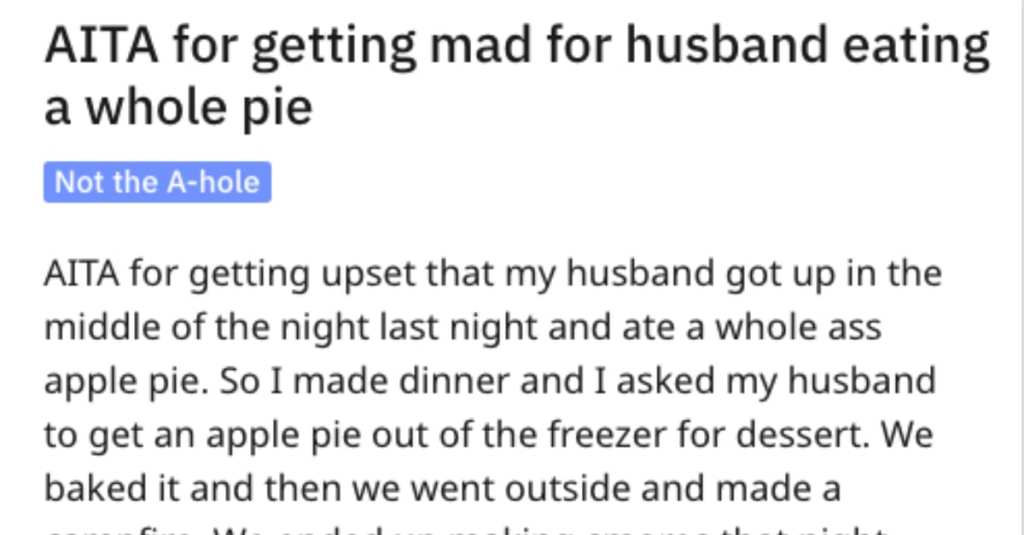 Her Husband Ate Whole Pie as Midnight Snack, But She’s the One Wondering if She Was in the Wrong?

Marriage is complicated. If there is one single truth about life and relationships that everyone can agree on, that must be it. It’s tough to not only love someone through decades of ups and downs and life changes, but to put up with sharing the same space with them all that time, too.

This woman is raving on Reddit about how her husband ate the entire family’s dessert for the next day in the middle of the night, but those of us who have been married all must be wondering what she’s really upset about, right?

It begins like an average day in the life, with a couple discussing what’s for dinner and dessert, then putting out a pie ahead of time like responsible adults.

So I made dinner and I asked my husband to get an apple pie out of the freezer for dessert. We baked it and then we went outside and made a campfire.

The didn’t eat the pie because they have kids and they’re always changing our plans; they had s’mores instead, putting the pie in the fridge for the following night.

Did they discuss this? She doesn’t say.

We ended up making s’mores that night because the kids asked.

So the pie went in the fridge until the next night.

Or so I thought.

The next morning she found two bites of pie and a fork in the fridge (and perhaps the lingering scent of marijuana in the garage?).

I wake up the next day and this dude has a fork and literally 2 bites left in it in the fridge.

I’m talking about the big marie whatever apple pie with the crumbles on top.

When she confronted him about the absurdity of consuming an entire pie under cover of darkness he replied that he didn’t know they were going to eat it as a family.

He has kids, so this seems suspect AF.

I’m like wtf why would you eat the pie we were going to eat for dessert?

He said well we didn’t eat it last night.

I said yeah no shit we all ate s’mores and thought we would eat it tomorrow after dinner.

He went on to tell me it was no big deal and I shouldn’t be so emotional over it.

Which is when she lays out what we all suspect, which is that it’s not about the pie, per se.

It’s about his not thinking about his family or considering their happiness and needs before he takes care of his own wants.

I’m like it’s not that I’m emotional about the pie…. it’s the fact your a$s ate a whole pie in the middle of the night because you get so stoned and can’t control your eating at night.

AND that you are so selfish that you didn’t even think about the wife and kids.

And he does that sh%t all of the time.

He will be a glutton and eat sh%t and I have to hide sh%t. So am I overreacting?

There’s the crux of it.

Is she overreacting? Let’s see what Reddit has to say!

More than a few people pointed out that eating an entire pie could definitely be a cry for help. 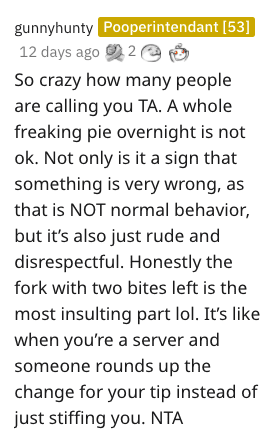 In marriage, the little things become big things for a reason. 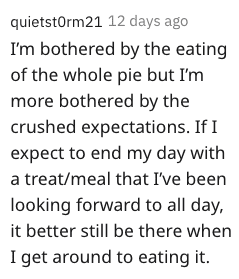 People who claim to love you should think of your needs and happiness, too.

See? Definitely not about the pie.

Reddit loves to get to the root of it. 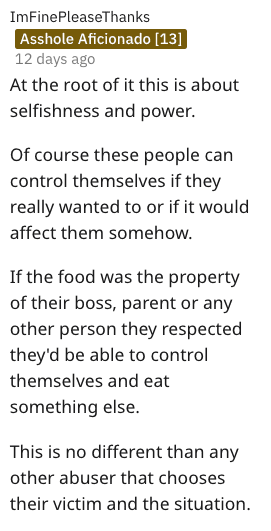 I’m sure a trained professional can help them sort it out. Or not.