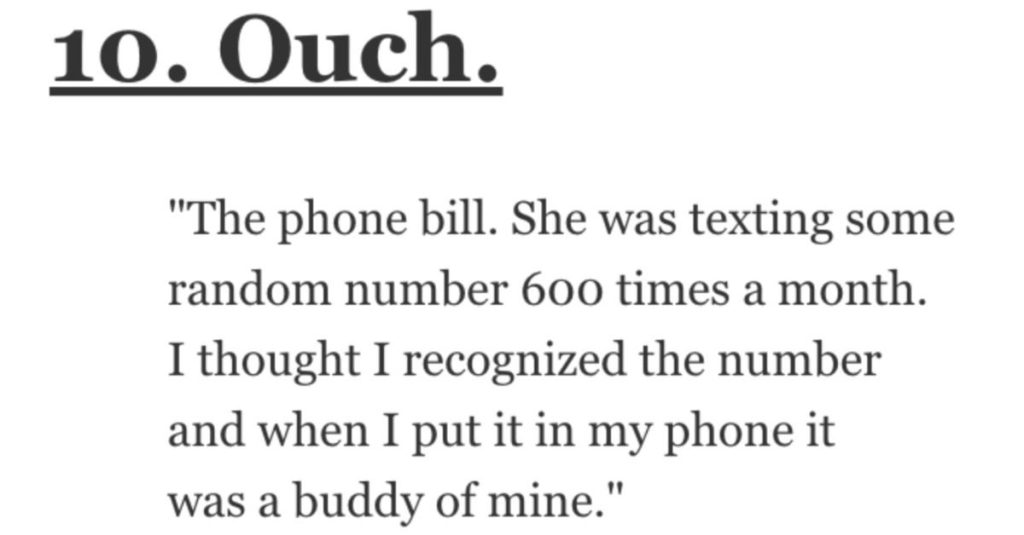 How Did You Find Out Someone Was Cheating On You? People Shared Their Stories.

Have you ever been unfortunate enough to discover that someone was cheating on you?

And if you’ve been there, you know how awful it is.

And you know that these folks on AskReddit still feel the pain from when it happened to them.

Check out their stories below.

“Went on a solo road trip to CA from NY. My then bf of 5 years was supposed to fly to San Diego when I arrived, then we’d drive home together.

Pick him up from the airport. Use his phone to pull up directions for our restaurant reservation. He gets a notification from a social media app he must’ve forgotten to delete. I ask him about it, he grabs his phone and deletes the app.

Says it would hurt me more to read the conversations he’d been having with women, and that I’m obviously going to dump him either way so he wanted to save himself the embarrassment of getting exposed. I made him call his mom and arrange to have his stuff moved out of our apartment.

Told him to find his own way home. Finished the road trip home without him. When I got home it was like he’d never lived there. Exactly how I wanted.”

“When she left me cause she got pregnant, and thought it was a different guy’s.

Turns out I was 1 of 3 possible dads, a couple years later and a few paternity tests and turns out it was mine.”

“He pocket dialed me while bragging about it to a co-worker.

The universe really had my back on that one.”

“Was using her phone for GPS while we were on a road trip because mine had issues when she got a text from the guy we had been in marriage counseling about who she says she hasnt talked to him for months about seeing her tomorrow.

All down the f**king drain and ruined my life for a guy who could pass for a real life Ned Flanders.”

“Open up the tablet to play with it, found an open email that I had never seen before – read the messages between them.

I’ve never been the same since. Divorced now. We were together for 30 years.”

“Long story short, she lied about seeing a movie that wasn’t coming out for another two weeks. I pressed and the truth came out.

We stayed together under the guise of us working on us and fixing the problems that needed fixing. I tried. Hard. Two months later a mutual friend tells me that she’s been seeing the one dude.

I talk to him, and find out that she’s been seeing him, and another 3 people, no safe s**, and pregnancy.”

“He told me directly.

His family members found out about it and I guess he thought he better told me since it was out in the open.”

“Her roommates called and asked me to meet them for lunch, said it was important. I met them and they told me she had been cheating on me with her ex the entire time I was deployed.

They showed me pictures (back when you had to get pictures developed). They said I was a good man and I didn’t deserve to be treated like that. They had collected my things that morning when she left for work and gave them to me. I drove to her work, walked up to her, showed her the pictures and demanded the ring back.

She gave it to me and I left. Later she called me yelling about me “conspiring with her roommates” basically trying to make it my fault. She asked what I was doing meeting with them? I said, ” it’s called respect and closure and it sounds like this” I unplugged the phone (landline), waited an hour plugged in the phone and called the phone company, said I needed to change my number and never heard from her again.

I took it really rough and am thankful for her roommates and the friends that got me through probably the darkest time of my life.”

“This was a long time ago- before social media. I went to check my email on his computer and his instant messenger popped up.

The “ex girlfriend” couldn’t wait to finally see him next week, that long distance has been awful and can’t wait to reconnect. He told me they broke up. They did not. He did not tell her about me or that we were living together. I was suddenly homeless.

She did fly in the next week and gave the ring back- I did not know they were engaged, thought they had broken up. Yay- good times.”

She was texting some random number 600 times a month.

I thought I recognized the number and when I put it in my phone it was a buddy of mine.”

“The guy shot me a message on social media, said he was sorry and didn’t know she was in a relationship.

I bumped into him at a bar years later and bought him a drink.”

“After 8 years together he told me he wanted a break to figure out “if this was what he really wanted” – after I said no, it’s either work on things or we end it, a few days later he admitted he’d met someone.

So basically he asked me to hang around waiting for him while he f**ked some other girl for a bit.

Good riddance to that one.”