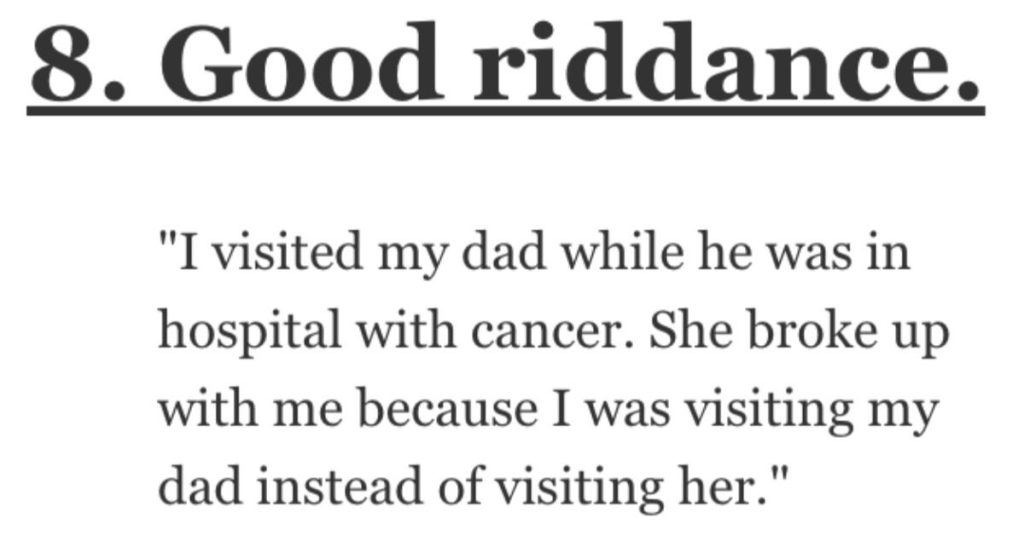 What’s the Most Ridiculous Reason Someone Broke up With You? Here’s What People Had to Say.

I have a feeling some of these responses are gonna remind you of plots from episodes of Seinfeld.

So go ahead and check out the ridiculous reasons why these folks had people break up with them.

“She sent me a breakup text as she was jumping into some other guy’s back seat.

I got the story a couple hours later through a mutual friend who was there. The next day she called wanting to get back together.

“My first boyfriend came over and dumped me on my front porch.

He also had a lisp.”

“Two months into dating a girl, I accidentally spilled some melatonin out of my backpack on her bedroom floor.

She was like “What are those pills!?” Accusations of me being a drug addict (I wasn’t) and then blocked me on everything.”

““I love you. You’re the best man I’ve ever met and I hope whoever I end up with is just like you. Just not you.”

Then she kissed me and said she’d miss me terribly.

Such a mindf**k. She was “the one” until this moment.

A few months later, I met my now wife. So thank god for that.”

“3rd or 4th date. Till then, everything had actually seemed pretty great.

I took her to the movies, asked if she wanted butter on her popcorn…

Get back to the seat, hand it to her, she takes a bite and spits it out comically like into the row of seats in front of us. Then yells at me, loud, so the people she just spit on already get even more of the experience ruined along with whoever they are sitting with:

Is there f**king butter on this?

Then she walked out of the date and our relationship, WITH THE F**KING POPCORN.”

“I dated a woman for about a year and helped her finish her PhD. I proofread and wrote some of her thesis.

After she received the degree, she broke up with me. She said she didn’t feel comfortable that she was better educated than I was.”

She was meeting with one “friend” a lot. Told her it made me uncomfortable but I trusted her. Apparently, if I had been more jealous (aka controlling) she would not have broken up.

F**k me for being a trusting person. Dodged a cannon ball there.”

“I visited my dad while he was in hospital with cancer.

She broke up with me because I was visiting my dad instead of visiting her.”

9. You have two choices.

“I was with this girl for like 3 years at the time and she H**ED when I’d spend time with my friends or if I did anything without her. I didn’t even see my friends that often and I encouraged her to go see her friends and find things to do because it’s not healthy to do literally everything together.

One day she calls me and and is like “that’s it I’ve had it, you need to pick. It’s either me or your friends”. I’m like “are you seriously gonna make me pick between my friends I’ve knows for years before I even met you or spend all my time with you? She says yes and I paused for about 10 seconds and said “them” and hung up.

For the record I wouldn’t have picked my friends over her but that fact she made me choose is what made me pick them.”

“I told them not to cheat on me again.

Seriously, I said I wouldn’t break up with them if it didn’t happen again, and then they broke up with me because they “don’t like ultimatums”.”

“Because he got a new job that had him traveling a lot for work, and felt I was “holding him back” being at our apartment back home.

That breakup blew my whole life up cuz we were an international couple and I had moved to HIS country to be with him! So I had to move all the way back to my own country to start over after six years abroad.

Spoiler: He came crawling back to me a few months later when he was lonely and begged me to come back. I obviously did not.”

“My boyfriend of 2 years broke up with me because he wanted, and I quote, “a Latina with attitude” and I’m “a nice girl.”

I’m not Latina and don’t have an attitude.

He knew that 2 years ago so I don’t know where that came from.”

“Because her dad found I out I listen to metal and have tattoos, that’s not wholesome enough for his daughter.

So she dumped me and found a good Christian boy that likes country music….incidentally he also ended up going to prison for m**h trafficking and got the ex girlfriend thrown in prison with him as she was driving her car with the 38 pounds of me**amphetamine in the trunk.”

Tell us your ridiculous relationship stories in the comments!