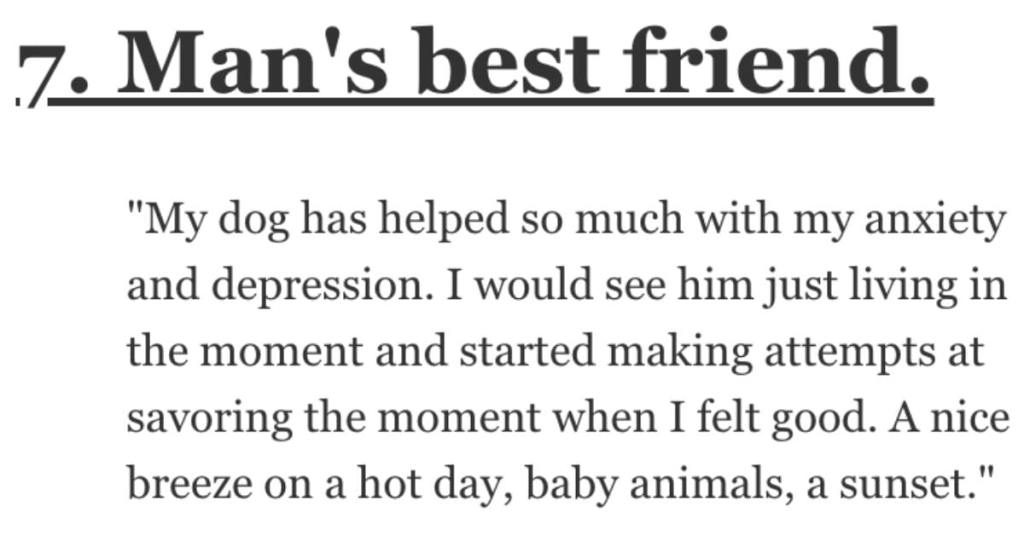 How Did You Get Out of Deep Depression? People Shared Their Stories.

If you’ve never dealt with depression before, it is awful.

You feel aimless, sad, exhausted, and something as small as taking a shower or eating a meal seems like climbing Mount Everest.

But the key is figuring out how to get out of that terrible state. And accomplishing that is different for everyone.

Folks on AskReddit talked about how they were able to get out of deep depressive states. Let’s take a look.

“I dragged myself out of bed and went for a walk with my little cousin.

Having him hand me flowers and point out planes was the most hopeful thing I’ve ever experienced.

It was if I was seeing the world from his joyful perspective.”

“I commit myself to brushing my teeth every morning.

I tell myself I don’t have to do literally anything else all day, but this one tiny, easy thing I have to do.

So I brush my teeth, with full permission to go back to bed and wish I was dead right after. But usually once I’ve done it, I feel like maybe I can do one more thing today.

But that’s all! I don’t have to anything else at all today, but I can probably manage to brush my hair. So I do that.

And I just keep doing tiny, easy things, and when I can’t do anymore, I already gave myself full sincere permission to call it a day, so I lay on the couch and wish I was dead, and sometimes while I’m doing that, I’ll think of one more tiny, easy thing I can do, and I’ll do that, and maybe a couple other things.

I want to be clear that it’s not about tricking myself into being productive; it’s about being accepting of my bad days and giving myself permission to do the absolute minimum until the next day, when I will reevaluate where I’m at and what I can do.”

But it got worse and worse and worse. I realized it was very bad when he came up to me with his toy car and I had absolutely no energy or desire to even say “oooh yes! Car!”

What eventually helped was being dragged to therapy by my aunt. I have had therapy for 2 years. After the first session I went home with one specific idea from my therapist and it helped me most: I put a journal next to my bed and forced myself to write ONE good thing about/for the day.

It started with 30 pages of one line: “Made breakfast for me and son”

Gradually there were 2 things: “Made breakfast for me and son” “Got dressed”

I have recovered but still have setbacks as I have recurring depression episodes. My son is now 9 years old and he kind of knows what is going on when I have one of the episodes and he knows about the notebooks. To this day I still use them. It has never gotten back to just one line a day. Most beautiful thing? If I can’t think of something……….. my son can think of something.

I have even come across some things HE wrote down for me without me knowing. They’re like secret little surprises to find at night. Those are the BEST motivators!”

“I gave myself permission to do nothing. This permission removed feelings of guilt & anxiety about the inactivity.

Then, once I had given myself permission, I relaxed and rested. My body and mind needed that.

Eventually, I got better and felt like doing something again.”

“Forced myself to see a doctor and get on meds.

Nothing in my life and relationships with people changed, no trigger.

After months I just picked one of those rare “motivated enough to go make myself a sandwich” moments and dragged my *ss to the hospital instead.”

“I had a bad bout of depression the end of last year. I wasn’t going to end it, I don’t think, but I didn’t care if I died.

Just straight apathy for living and everything.

On my absolute worst night, after an entire day of sitting on the side of the bed and staring at the floor, I called my mother. It was late and though we are close, I don’t often call her out of the blue. She knew something was wrong when she answered.

The next day I made an appointment with a doctor and a therapist. I got on medication to fix my non-existent seratonin and started opening up about my feelings with professionals, friends, and family. I realized how much people cared about me.

As the meds started to build up, I found myself exercising everyday, just like pushups and planks and stuff. I started buying more fruits. I eat a lot of berries. All this made me feel physically better.

After a few weeks I got passed up for a job that I had interviewed twice for, thought I had, really wanted, and kind of needed. It didn’t put me into a crashing depression. I was disappointed but it was just a problem to overcome.

Depression is a sickness just like anything else. I totally understand that many of the Americans reading this don’t have insurance but a month supply of lexapro using the Good Rx app is dirt cheap.

I hope the people reading this can find a purpose and a happiness. Life is neat. I know it sucks for you right now though.”

“My dog has helped so much with my anxiety and depression.

I would see him just living in the moment and started making attempts at savoring the moment when I felt good. A nice breeze on a hot day, baby animals, a sunset. And then I discovered mindfulness, which led to practicing gratitude and loving-kindness.

I wanted to have more energy to play with my dog so I paid better attention to my diet. The way I used to before I developed a chronic illness. My dog is one of my biggest motivators.”

“Honestly, my friends and family.

I’ve been so deep into depression that I spent 2 days trying to take my own life. Repeatedly. I remember that I texted my best friend how I was feeling but she didn’t answer so I immediately thought she hated me and wanted me dead. I climbed up on my balcony and almost threw myself off it. But my neighbor came home and I didn’t want to traumatize them.

I ended up in hospital hours later but I was released. My friend texted back and her message was “I wish I texted you back sooner.” But what really sealed the deal was that I was in the psych ward following another suicide attempt. My entire family (unknown to me) was cleaning and refurbishing my apartment. I called my sister to check on my cat when I heard my other little sister.

She didn’t know where I was exactly, she just knew I wasn’t feeling right in my head so she kept repeating “I love you, I love you” Over and over to make sure I heard her. Sometimes I still want to die but then I remember her repeating “I love you” And suddenly I can either find the strength to continue or check myself into a mental ward.”

Something about realizing how huge the universe is & still I was born. For what? Maybe just to be. For so long my depression came from not living up to the expectations I thought I should’ve been. So many people live searching for a purpose, but you ARE the purpose.

Out of all the planets in all of the systems in the WHOLE universe, we found ourselves in the one planet we know of that can sustain life.

Also changing the way I see religion as a result. I was taught (catholic) that we must live good lives to please this man in the sky. But with astronomy I started seeing everything different. To me, God is the universe. It created itself, & created us.

Not for a greater purpose, but just to live. We don’t have to strive to be a perfect human because we are already living in this heaven that as far as we know is the only one. I don’t want to live my whole life for this after life & miss the one Im in.

Doesn’t matter if you want to do it or not, your body needs it so badly. It takes a lot of work to get to the kitchen and scavenge some leftovers or a big snack, but it pays off wonderfully.

It might not make you happy, but it helps give you a little boost of energy to take care of yourself through the day.”

On week 3 now of unemployment and never been happier. Turns out my soul sucking job of 6+ years as an accountant has been slowly killing me inside to the point of being suicidal. I’d been doing the job of 3 people for 2+ years (sh*tty company=high turnover issue – shocker) and I fully intended on sticking it out at least 1 more tax season before quitting.

But the first ~2 weeks of January were so bad, workload wise, the worst ever in my entire 6 years working there, that I put my notice in for the end of Jan.

Taking a few months off to work on myself and re-discover my hobbies and interests again before looking for another job, hopefully less soul sucking. I realize most people don’t have this luxury but quitting that sh*thole has given me life back.”

Have you ever been able to snap out of a deep depression?

Please tell us your stories in the comments. Thanks!