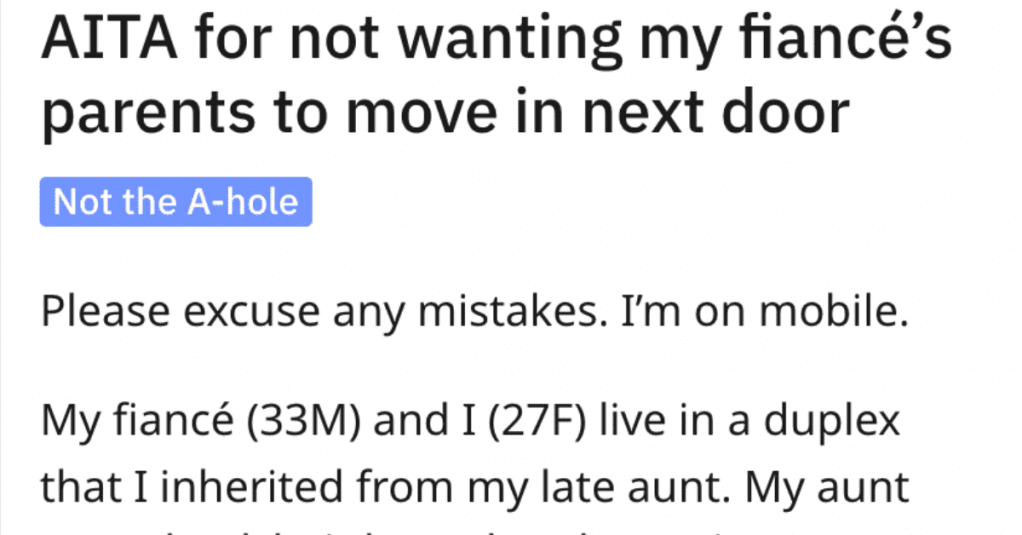 How Do You Tell Your In-Laws That Next Door Is Too Close?

Everybody Loves Raymond was a popular television show, but I think most of us can easily understand why Debra was never that thrilled about living close enough to throw stones at her in-laws house.

This person is staring at possibly living that scenario out in real life, and while she’s ok with her in-laws living nearby, she’s already promised the space in question to her brother-in-law and his partner, who are in dire straits.

My fiancé (33M) and I (27F) live in a duplex that I inherited from my late aunt. My aunt was wheelchair bound, so her unit was renovated to be wheelchair accessible. The unit that my fiancé and I live in do not have the same accommodations.

My brother’s (35M) partner (34M) is disabled and uses a wheelchair. While they are currently renting a wheelchair friendly apartment, their landlord has decided to raise their rent next year by a significant amount. They can technically afford it, but it would put a serious strain on their finances.

I told my brother that they can move in my aunt’s place when their lease is over. We agreed that I would only charge a token amount for rent and my brother would help me with the maintenance and upkeep.

After she made that promise, her father-in-law was diagnosed with cancer. Though it looks like he has a good chance to survive, he will need to be close to the hospital for treatments, etc.

Her fiancee suggested they move into the unit next door, but OP says she’s not going back on what she promised her brother, and his parents can move in with them.

A few days ago my fiancé told me that his father has been diagnosed with cancer. While it’s thankfully not terminal, he does need to undergo chemo for a while. My fiancé asked me if his parents move in next door since we live near the hospital and they currently live 2 hours away.

I told my fiancé that I was fine with his parents moving into our unit with us, but I’m not going back on my agreement with my brother and BIL.

Her fiancee didn’t think that generous offer would do, and proposed they just help out her brother instead.

Even though his parents have money and the fiancee has siblings who can also help out if need be.

My fiancé argued that this wasn’t a feasible solution. His parents need their own space. Our place also doesn’t have the accommodations his father might need. He argued that my brother and BIL can wait another year or so to move in, but his dad needs to start treatments soon. They can renew their lease and I can help them with rent.

However, my ILs are well off and can afford to rent a place that fit their needs. Additionally, my fiancé has two siblings with good paying jobs that can help pay his parent’s expenses. My brother and BIL only have me to help.

Since her fiance is still mad at her about the whole thing she’s starting to second-guess herself – but what does Reddit have to say?

My fiancé is still mad at me. He thinks I’m being unfair putting my brother and BIL over his sick dad. Now I’m wondering if I’m wrong. AITA

The top comment just hits the nail on the head – it seems like OP is bending over backward and her fiancee is not willing to meet her in the middle. 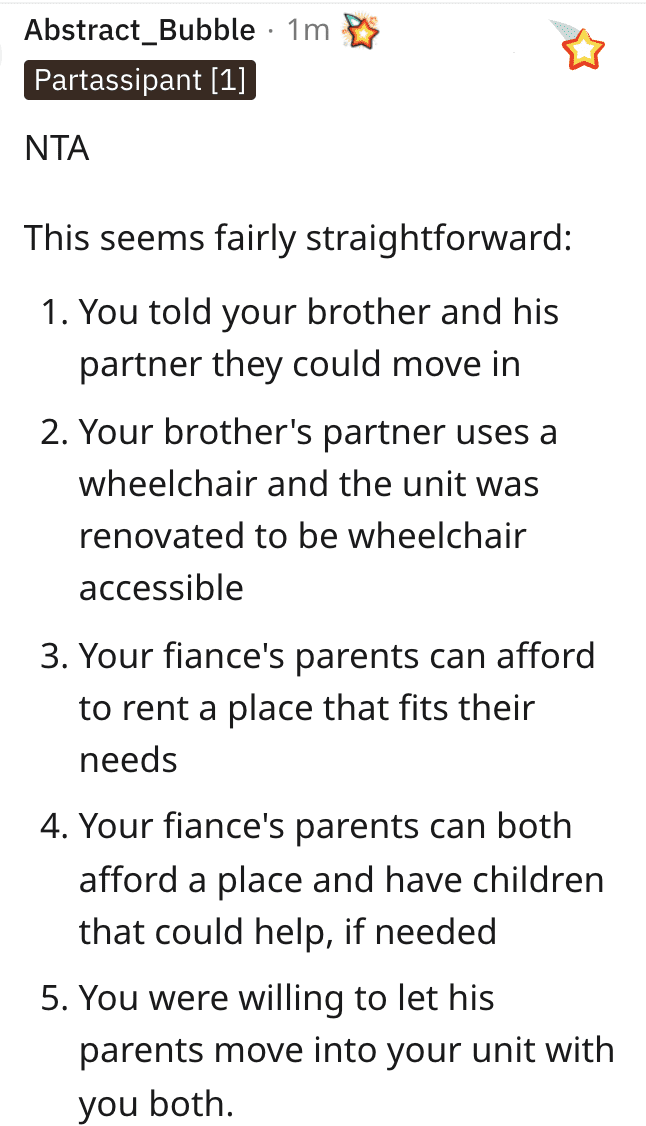 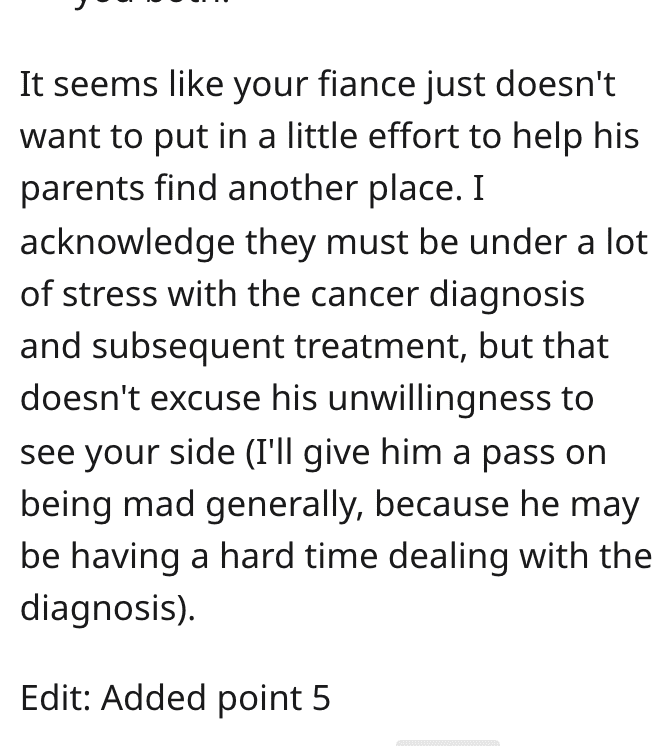 If this is a test, Reddit thinks he’s failing. 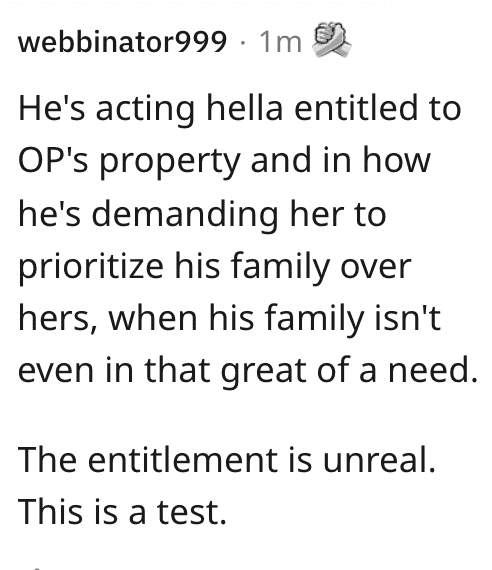 Let’s hope he snaps out of it before he ends up single. 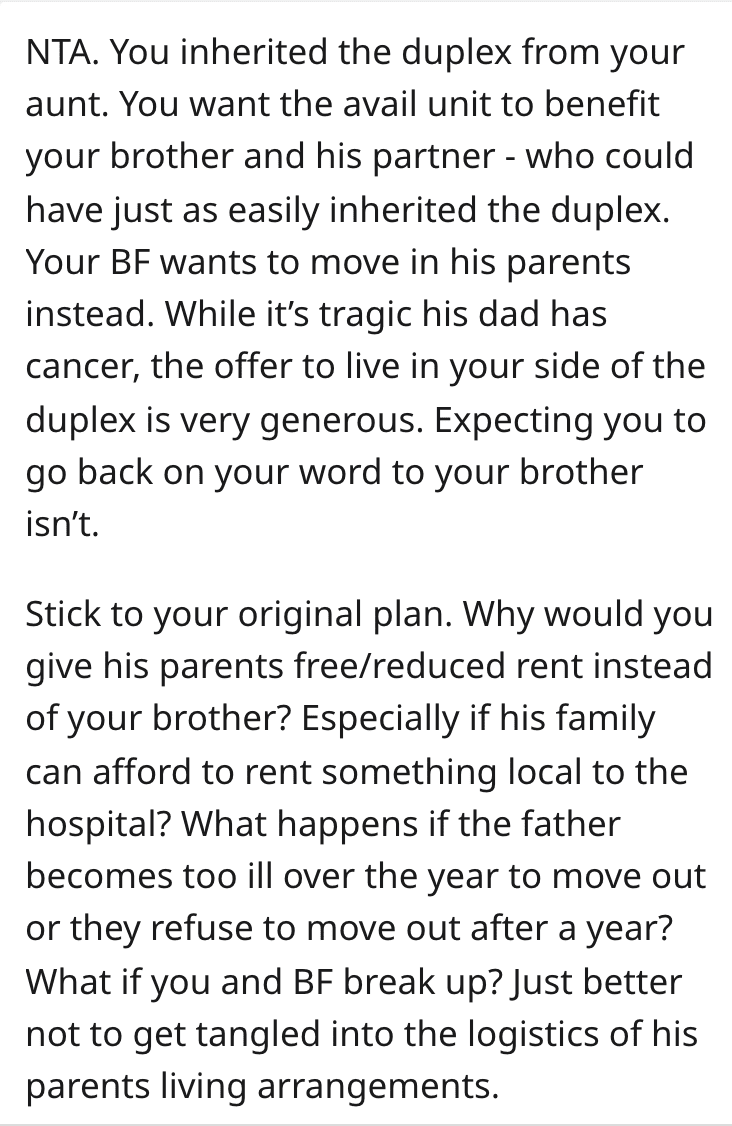 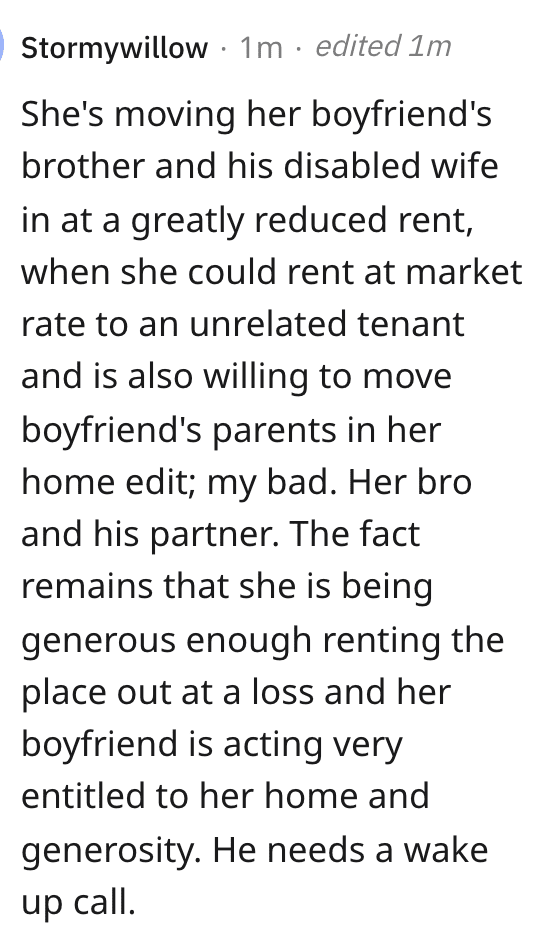 No one can see the future. 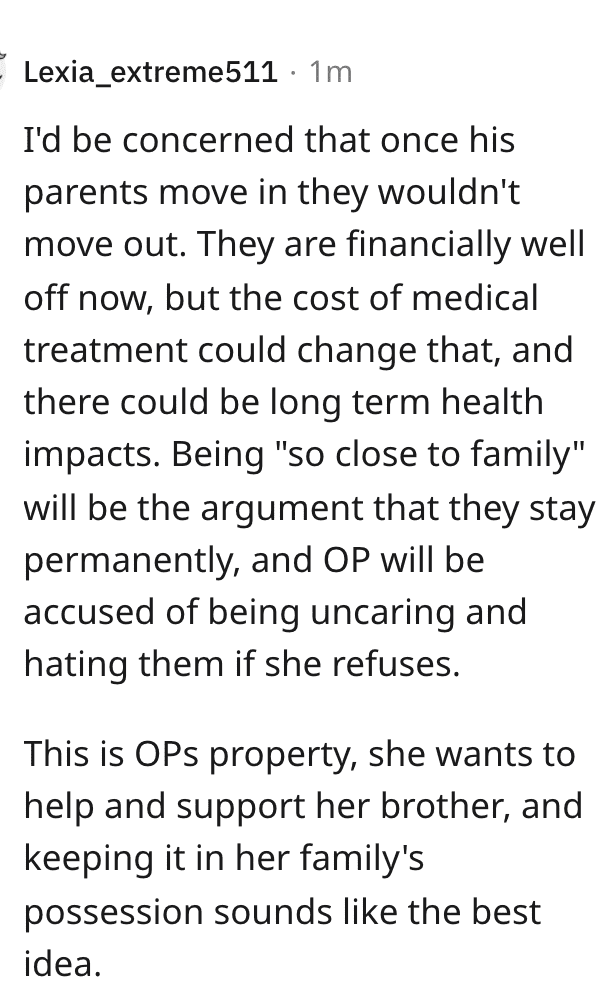 I don’t know what I would tell this woman if she was my friend, but it would probably be hard to hear.

What about you? What are your thoughts? Drop them in the comments!