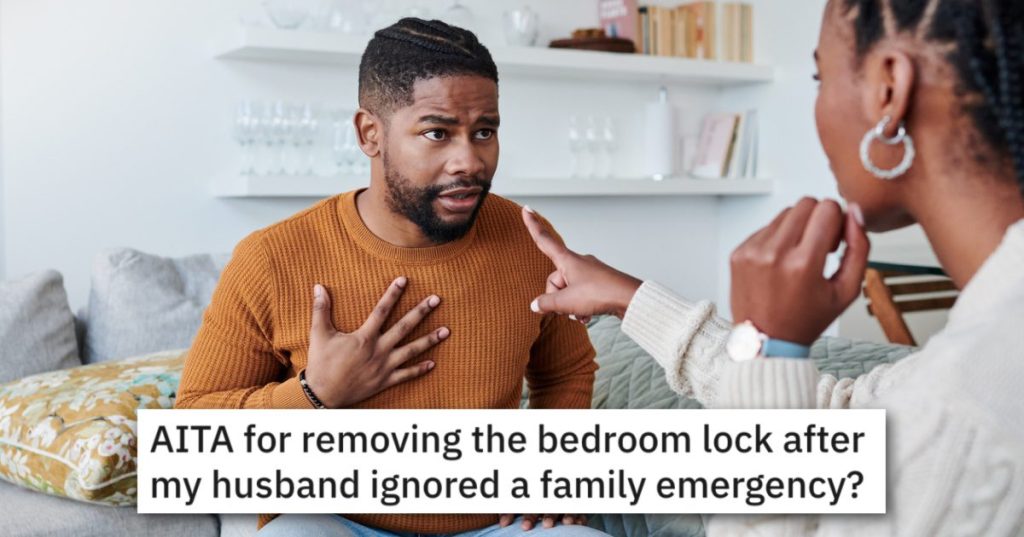 How Far Does A Right To Privacy Extend In A Marriage?

If you’re a regular reader of the subreddit Am I The A$$hole then you know that there are so many ways to do marriage wrong that it’s kind of astounding. Sometimes, though, it just takes an outside perspective to force a poster to see that the way that they’re living is not healthy for anyone involved.

This woman is married with two children (14 and 3) and her husband spends his time gaming, sleeping, or working. He stays up late to play games and has to leave early for work so he fiercely protects his “nap” time after work.

Background about my husband : He stays up late at night and has to wake up early to go to work. So when he gets home at 5, he has to get his 2hrs nap so he could both make up for lack of sleep and also be ready to stay up late to play with his console.

He values his sleep and has one rule in the house that he enforces strictly, which is to not be interrupted while sleeping. He literally put a sign on the bedroom door saying ‘DO.NOT.WAKE.ME.UP” under any circumstances, just no, unless someone’s hurt or dead though; in this case he said he still wouldn’t be of much help anyway.

He takes this so far that he’s begun wearing earbuds and locking the door.

The kids and I would sometimes wake him up but for serious reasons. He got mad and started locking the door. I get no access to the room for 2 hours but that’s not the main problem.

Recently their toddler had an accident that required a trip to the emergency room. OP tried and tried to wake up her husband, as she has a disability that prevents her from driving.

This past tuesday, my 3yo son had hot oil spill on his hand while his 14 yo sister was cooking, I heard him scream and saw that the oil was covering his hand and half of his arm, I brought the first aid kit but he was in so much pain and his skin looked really bad.

I rushed to wake my husband up, I kept knocking but got no response so I tried to open it but it was locked.

Eventually she had to give up, asking a neighbor to take them to the hospital instead.

I spent a while between knocking on the door (he had his phone turned off) and getting dressed after my daughter asked the neighbor to drive us to the hospital.

I couldn’t waste more time cause my son was crying. The neighbor took us to the hospital and I couldn’t help feel livid the whole time. We got home and my husband was pacing around asking wherever were and why I didn’t answer his texts.

When they returned home and she blew up on him, he turned the situation around, blaming her for the accident instead of apologizing for not being available when they needed her.

I blew up on him after I showed him our son’s injury and told him that I pounded on the door to wake him up but he said had his earbuds on and didn’t hear a thing. I called him reckless and neglectful for ignoring a family emergency.

He said I could say the same thing about myself for leaving our son unsupervised and causing him to get a burn.

OP gave up arguing and just took the lock off the door instead.

Her husband was livid, saying that she wasn’t respecting his need for privacy and rest.

I stopped arguing and went to remove the bedroom door lock, he started yelling at me saying I had no right.

I refused to respond I just walked off to calm down.

He didn’t stop complaining calling me bossy and saying that by removing the lock I’ve destroyed his peace and quiet and caused him sleep deprivation. He’s insisting I put it back but I refused.

I could be wrong for what I’ve done but I was frustrated and mad.

Y’all. Let’s just dive into the responses from Reddit, which are bound to be epic.

There are so many issues here that some commenters didn’t even know where to start. 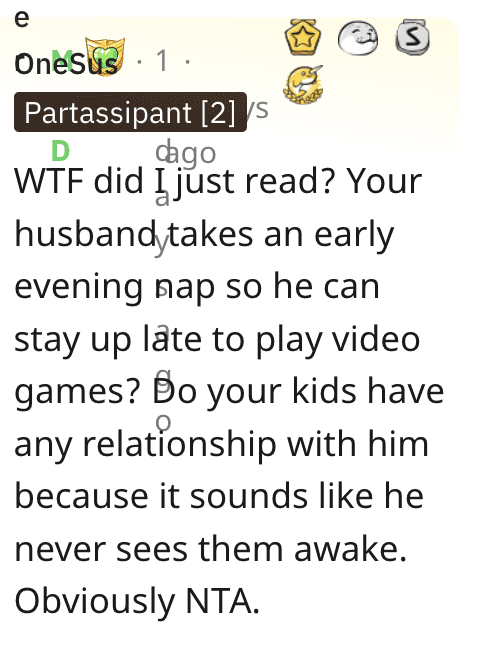 Everyone is trying to figure out just what in the heck OP is getting out of staying with this man. 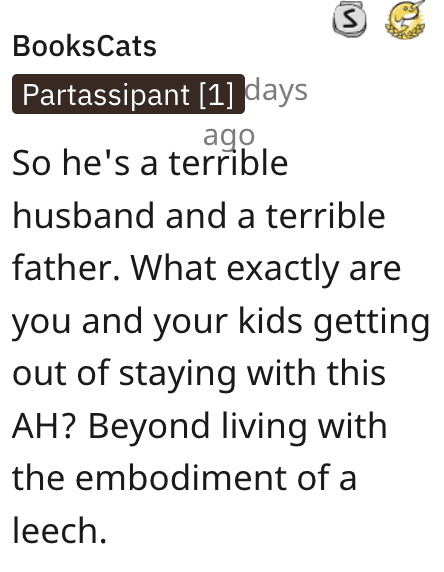 There are so many red flags, starting with the fact that he doesn’t seem to care if his family needs him while he naps.

All of this righteous anger is totally justified. (2) 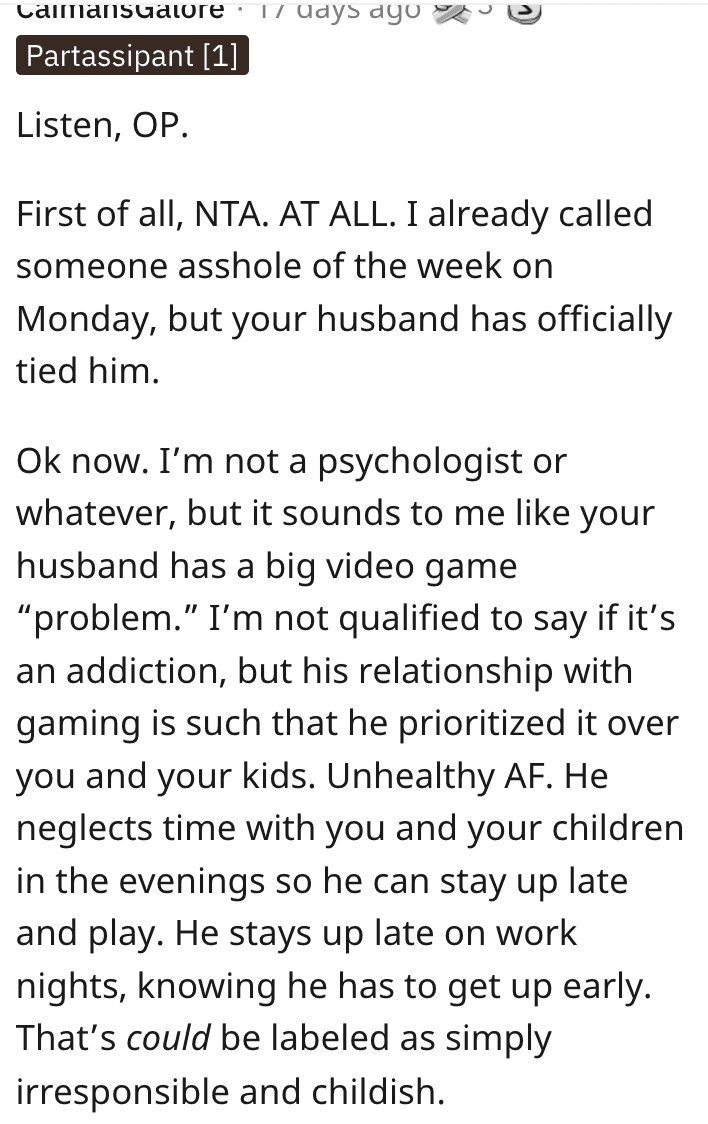 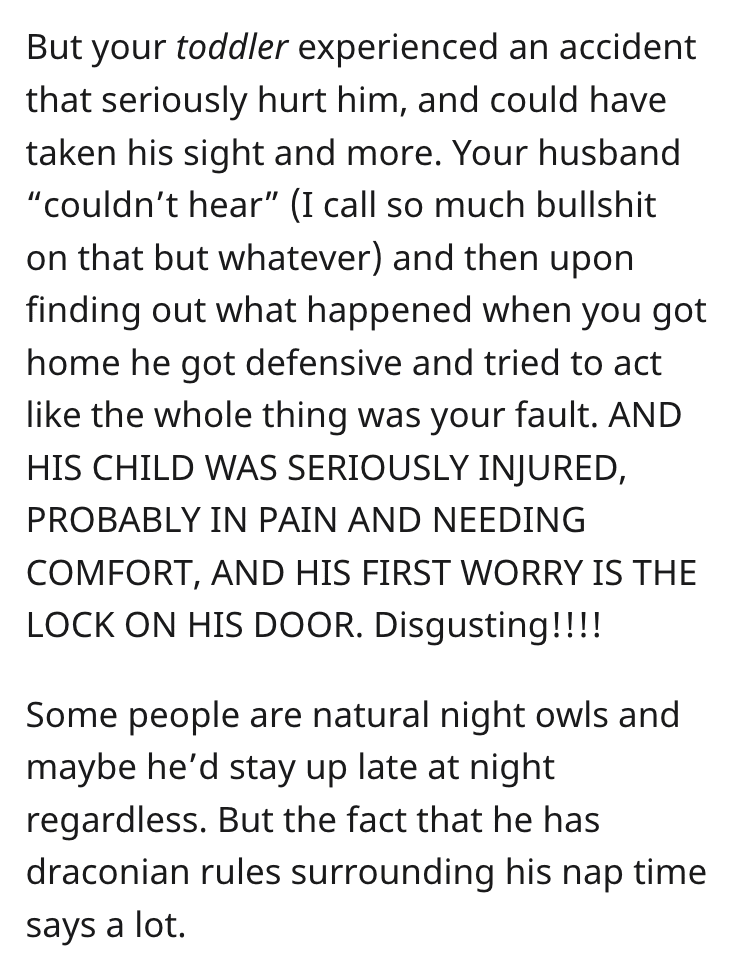 We all think she deserves so much better. 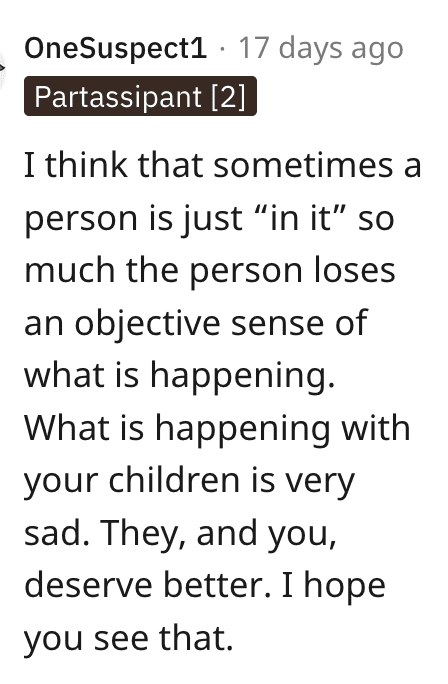 I truly hope that this woman read the comments and can start to realize how much more her and her kids deserve.

On a scale of 1-10, how angry were you while reading this post? Sound off in the comments!