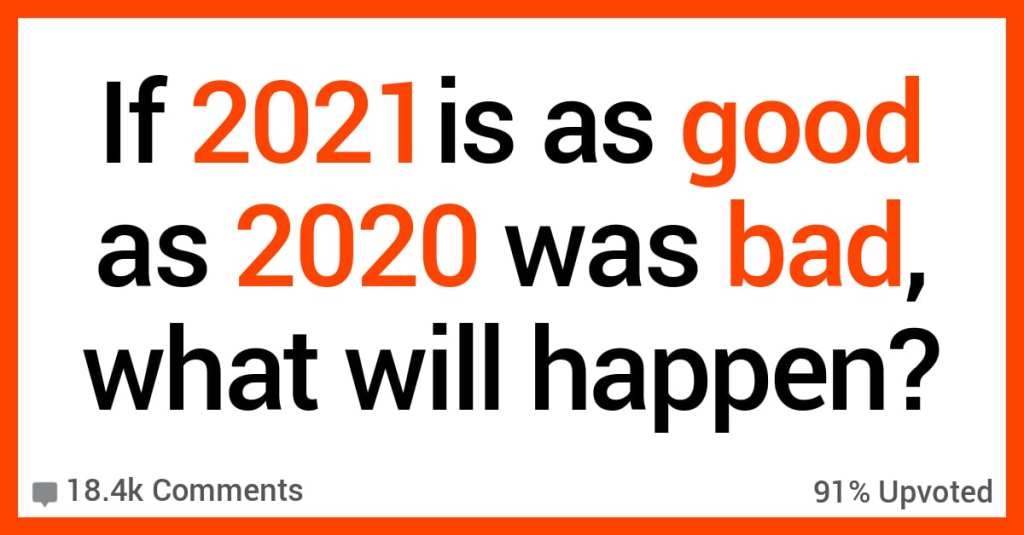 Let’s not try to sugarcoat it.

BUT, it looks like we might finally be turning the corner in regard to the worldwide pandemic and there is reason to be optimistic for the upcoming year!

Let’s see what people on AskReddit had to say about this.

Makes anyone who has it feel happier and their body work more efficiently.

We have the opposite of lockdown, mass Covid parties so we can all get it!”

Those things would automagically disappear.

That would help millions of people the the U.S.”

I just want my daughter to be okay. This year has taken a major toll on her. She’s only nine, but she’s been asking what the point of living is.

I want covid to quiet down so she is reminded of what life has to offer. It’s going to be a very long winter.”

“We get a resurrection device and bring back Bob Ross, Stan Lee, and many of the other greats.”

“Everyone comes out of quarantine touch-starved and casual hugging becomes acceptable to everyone.”

You have two sides who both think the other side is a bunch of brainwashed morons (though I think one side is right).

Misinformation is a really big problem.”

“People realize that this whole mess could have been avoided if we didn’t eat animals, and stop eating meat and dairy.

That would be amazing.”

“Under the new administration, the US becomes fully energy independent at last, allowing the country to finally just get the hell out of the Middle East.

Meanwhile IS and other terrorist groups, as well as some particularly vitriolic local governments, never fully recover from having been shut down by COVID.

Extremism in the Middle East ends not with a bang, but with a wheezing cough.”

“People will start caring about each other.

Everyone. All nations, all races, all creeds, all socio economic backgrounds.

“The world will take collective action against climate change and compensate the poor people suffering through its effects.

Current context: The Philippines endured 4 f*cking typhoons in 3 weeks, my city took the brunt of a strong typhoon and a super typhoon in one week.

Another city experienced flooding up to the top of buildings which drowned many, mostly children and animals, and evacuation is still occuring days later– imagine having zero visibility while drowning or staying on top of a roof with your ailing father while looking for your 9 year old son. We are still expecting four typhoons before the end of this year.”

“January: A huge polar vortex causes the arctic to reach -470° F, freezing the entirety of Antarctica. Huge icebergs will form.

February: some of the older, smaller icebergs move northward to make way for the new ones. Because of the polar vortex it is able to reach Africa, where they’re able have a temporary source of freshwater for everyone. There is also peace made in the Middle East.

March: A vaccine is finally created, and it is free for everybody, with the only side affect being a small loss of bias. In America, a fake huge riot date would be set by the government in different places. They would all be captured and vaccinated. They would then informed of truth.

April: Nothing happens. Literally nothing happens but the sweet rain and flowers growing. This month would give people time to kick back and relax. Weeks are announced to be four days long instead of five.

May: However, a homophobic cult sweeps the globe, with one being the leader. In return, all of the LGBTQ+ people form a group of their own to fight back. They agree to battle by the grand canyon. After a war where people would slayed by tongues, The leaders of both groups get in a physical fight and fall down the canyon and miraculously survive the tumble.

They get to know each other in the process of surviving and create peace. After a week they are found by a flock of Rosy-faced lovebirds who call and screech until the they get enough attention, from which some tourists call an emergency number for their rescue.

June: The post-homophobic leader announces that members of the LGBTQ+ community are good people, peace is made. Before they’re off-air, they give a speech about how amazing and misunderstood birds are, and all abused parrots are sent to a loving home.

July: Inspired by June’s activity, furries set up a huge gaming event for the gamers, which people all over the globe thoroughly enjoyed. After it is over they reveal that it was the furries who set it up, for which the gamers would be very grateful, as they have made friendships with the furs in disguise over the event.

August: The gamers feel bad that all furry cons were canceled meanwhile they were able to game with their friends over mic perfectly fine. They set up a hobby convention for everybody and anybody. There would be nearly 500,000 attendees! At the end of the event, the weebs, gamers, and furries all made up with each other.

September: A whopping $60,000,000 worth of money is made from the convention, which is donated to the poor, as well as funding for underpaid artists.

November: For Día de los Muertos (Day of the dead) all of the famous, wholesome people come back to life for a day. We discover there is an afterlife where you will be happy.

December: Turns out, Santa is actually real. Because of religious peace made around February, all religions get together to celebrate the new made Christukkanzaa. And guess what? You actually achieved your New Year’s resolution. Great f*cking job, I’m proud!”

“Voting reform for Canada and the US.

Do you have any big predictions for 2021?

Tell us all about them in the comments. Thanks!