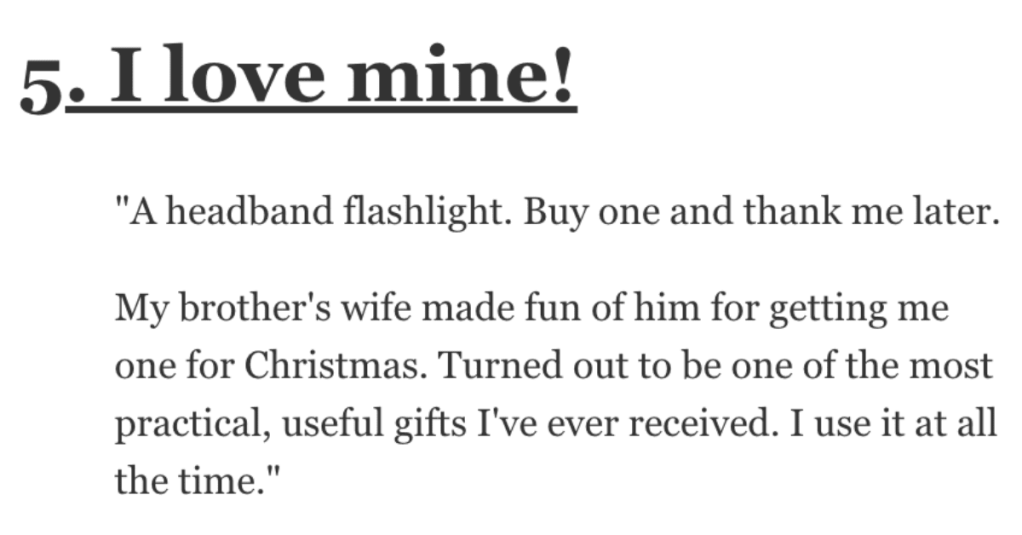 What Are Some Affordable Items That Are Life-Changing? Here’s What People Said.

We tend to think that it’s the huge, expensive purchases that are going to be life-changing, but a lot of times it’s those little, seemingly insignificant things we buy that really make a huge difference in our lives.

For example, I bought a small, electric grill to use inside for when it’s cold out. I use that thing all the time and the food I make on it tastes great! Who knew?!?!

AskReddit users talked about affordable products that might just change your life. Let’s see what they had to say.

Get the water everywhere on yourself from all angles.”

“An electric heating blanket UNDER your regular blanket.

I have joint/muscle pain and it’s been much better since I started slow-cooking myself overnight.”

Refreshes sweaters/coats etc. in no time and saves replacing the garments that are in otherwise good condition.”

“A mini hand held vacuum was one of the best purchases my wife made this year.

It’s so useful for cleaning the couches, small messes or the car.”

“A headband flashlight. Buy one and thank me later.

My brother’s wife made fun of him for getting me one for Christmas. Turned out to be one of the most practical, useful gifts I’ve ever received.

So simple and cheap, and instantly turns 5 seconds of the most annoying wriggling and forcing into a 1 second maneuver.

I’m amazed they seem to have gone out of style.”

It makes so much of a difference.

It doesn’t need to be fancy, but being able to look at 2 things at once makes doing work so much easier.”

I fall asleep so much faster now that my room is pitch black at night.”

“Timer-caps for pill bottles. Basically, the cap is a timer that resets every time you open the bottle. You can get some on Amazon for like $10.

At that level it actually makes you less productive, so you get nothing done and deal with insane side effects all day. Conversely, some days I’d accidentally go without it because I thought I’d took it already and get nothing done. The timer cap pill bottle literally totally fixed that problem.

It also made me aware that one of my friends stole my ADHD medication. They still won’t fess up to it. I wish they would. It was f*cked up but I’d forgive them. We’re not very close anymore.”

Quality underwear from somewhere may not be majorly life changing, but the day to day improvement is amazing.”

“A toaster oven. I used to think of them as something college kids have in their dorm rooms. But at age 60 I bought one. That was early this year, and I haven’t turned on my full-size oven since then.

I now toast things that I never would have toasted before, because the full oven was overkill. No more undertoasted sandwiches.

It also makes a nice pizza oven. Take a tortilla and put pizza toppings on it.”

Why waste all of that shower goodness just to rub yourself with sandpaper after you get out?”

13. Helpful in the kitchen.

“A rice cooker. I would love to have an amazing kitchen with expensive equipment but right now I can’t.

You can make a ton of stuff you didn’t think you could with a rice cooker, either that or a pressure cooker.”

I hang all my favorite kitchen utensils, pots, pans, oven mitts… On the inside of cabinet doors so I don’t have to hunt for stuff while cooking.

Okay, friends, now we want to hear from you.

Tell us about the items in your life that are affordable and life-changing.