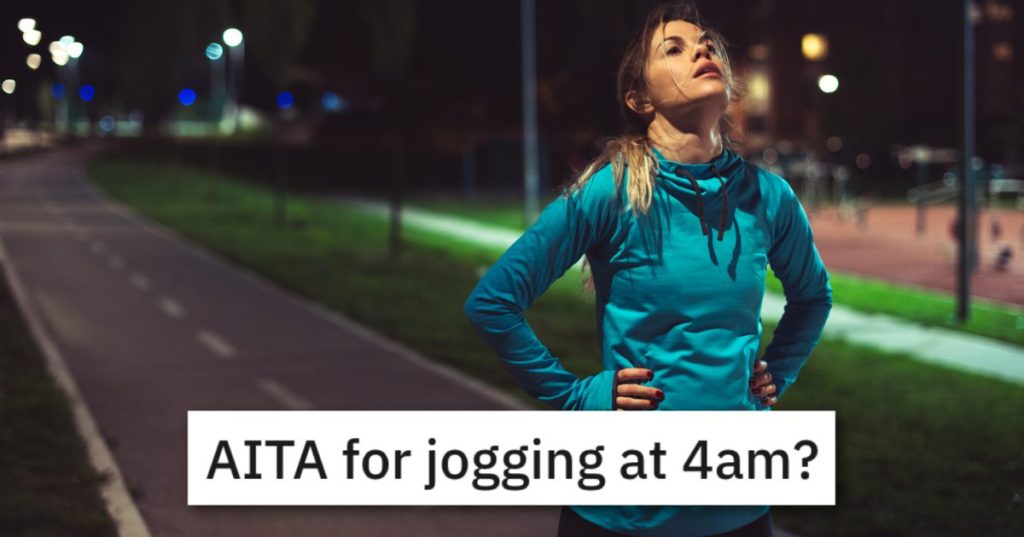 This is one of those stories that leaves me completely flabbergasted, because I would honestly think nothing of seeing a woman jogging through my neighborhood at four in the morning.

Sure, it’s early, but people have to get ready for work and get kids ready for school and get out the door for their commute, and so we all do what we have to do for that little bit of “me” time, right?

This woman is an emergency dispatcher who often works odd hours. One of her shifts has her getting off around four in the morning, after which she goes for an hour jog before meeting her boyfriend to help him open his bakery.

It’s actually kind of cute, if you ask me.

I’m an Emergency Medical Dispatcher which basically means if you call 999 with an emergency and need an ambulance there is a chance it’ll go to me. It’s a rewarding if stressful job and some of the calls i’ve handled give me nightmares but I wouldn’t change my job.

Some of my hours however are extremely unsociable and sometimes I get home at 4am and when I do I have a routine.

When I get home at 4am i’ll quickly change then go for an hour long jog while I listen to podcast. This jog by 5am will take me to my boyfriends bakery where we will share a meal: breakfast for him, dinner for me.

On the days I work this kind of shift it’s the only time we can see each other, I then help him set up a little before heading back to my home and sleeping.

All was well until one morning when a new neighbor confronted her about being out at that hour and demanded she prove she lived nearby lest she call the police.

All in all nothing abnormal ever happens but a new neighbour recently moved into my cul-de-sac, a woman in her late 30s or early 40s i’m not sure, I don’t know my neighbours THAT well as I don’t often have the ability to socialise with them due to my work hours.

During one of my recent jogs I paused on my way out of the cul-de-sac on the pavement near her home to pick out a podcast on my phone only to have her come out shouting at me about what am I doing near her home and how I better get before she calls the police.

I quickly apologised to her and explained i’m her neighbour, and just out for a jog, she didn’t believe me so in sight of her I had to go unlock my front door to prove to her yes I lived here as she kept shouting about the police, after this she stopped and retreated back into her home so I continued my jog.

That really should have been the end of it, but the woman continued to harass her every time she was out early for a jog, telling her it was strange and it was frightening her children, never really letting up.

Eventually, OP lost her temper with the woman.

Except she was watching me the next time I jogged and the next, and the next. Each time calling out vague threats about the police and how I shouldn’t be out at this time and how I was scaring her children always being out at this time, now I admit i’d finally had enough of this and laughed at her because i’m a 5 foot tall woman who looks like a solid breeze would blow me over.

I also told her to mind her own f**king business and how only she seems like the weirdo here always watching me go for a jog at this hour.

I also told her if she called 999 to say hi to my co-workers for me.

Now, she’s feeling badly that maybe the neighbor is struggling in some way and her presence is causing trouble, and also for losing her cool.

I’m not proud of how I lost my temper but it is getting to me how she is always doing this, it wasn’t until my boyfriend suggested over our shared meal that day that maybe she just had anxiety and seeing someone outside so early put her on edge and she was handling it poorly.

I admit I felt guilty after that i’d thought me jogging for an hour after my shift was harmless but i’m used to being up at weird hours.

Am I the a$$hole for jogging at this time? would it freak you out if one of your neighbours did this?

Reddit is weighing in on whether or not any of these feelings are justified, so read on!

The top comment points out that, while sad, the woman’s anxiety is not OP’s problem and she’s already done her due diligence. 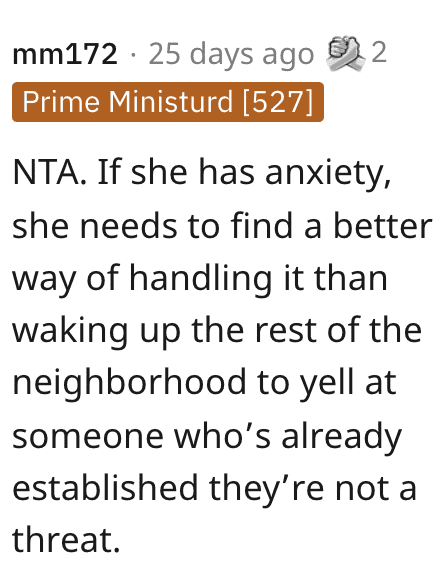 Lots of commenters were worried about the woman’s behavior escalating. 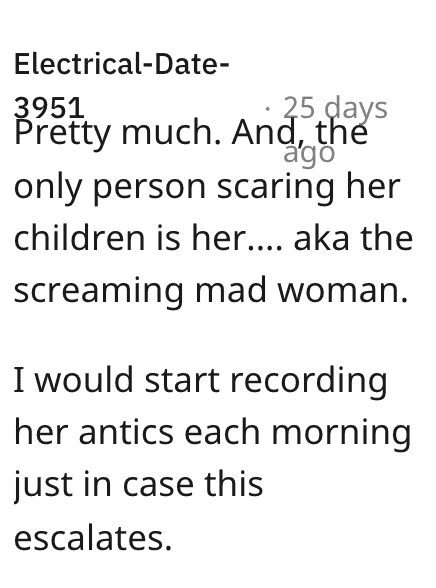 There is plenty that’s weird about this whole situation. 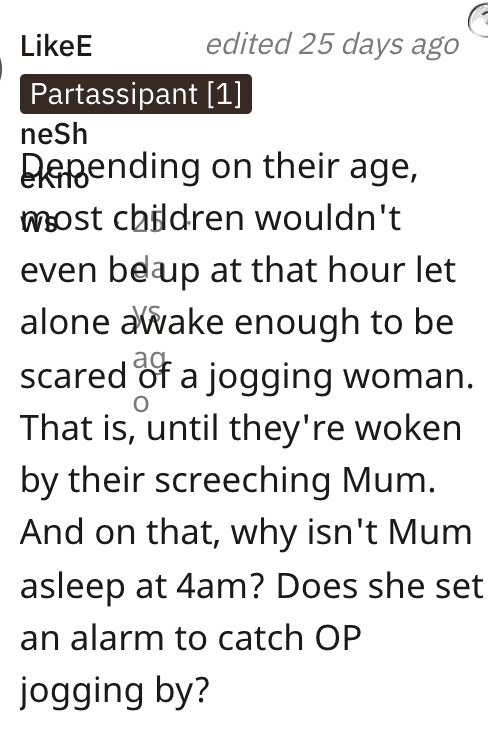 Other people encouraged OP to start a documentation trail now. 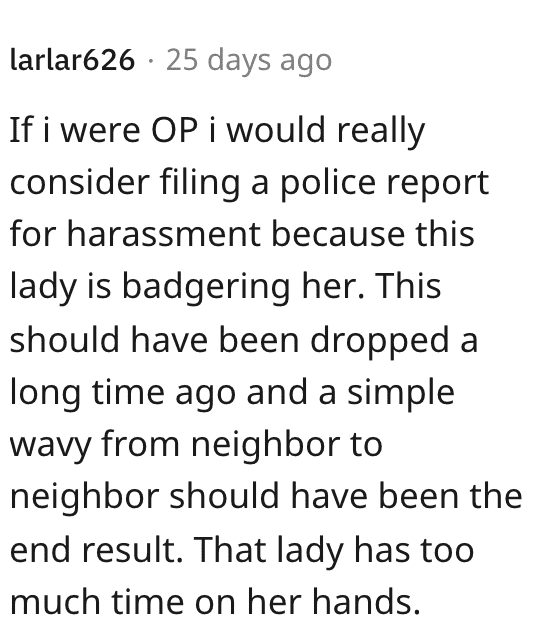 The bottom line is that going for an early morning jog really just isn’t that odd of a practice. 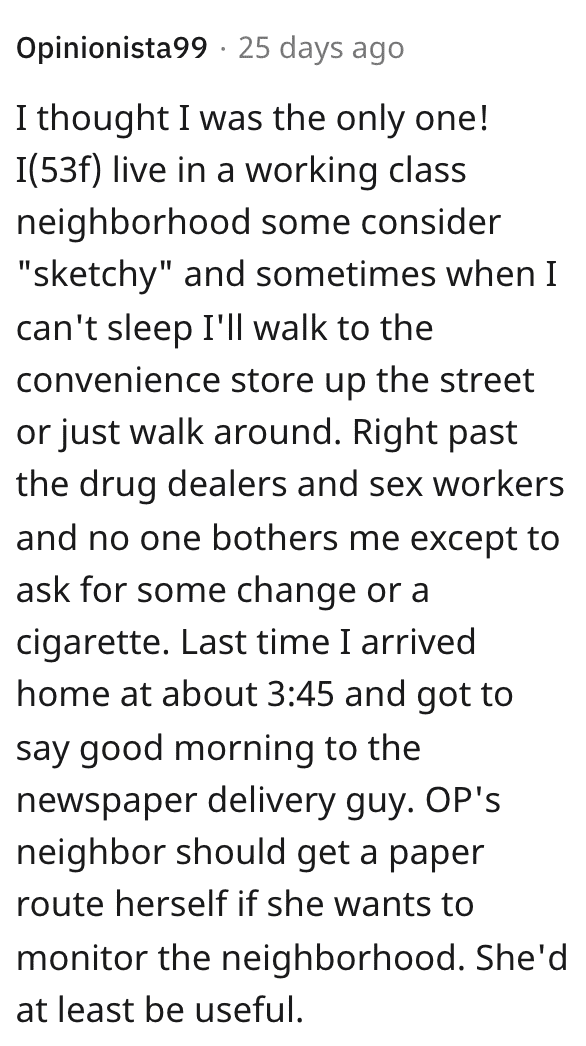 I personally wouldn’t think twice about going for a run any time of day that the mood struck me, if I was someone who went for runs.

What about you? Would this worry you or do you think this neighbor is totally overreacting? Tell us why or why not in the comments!