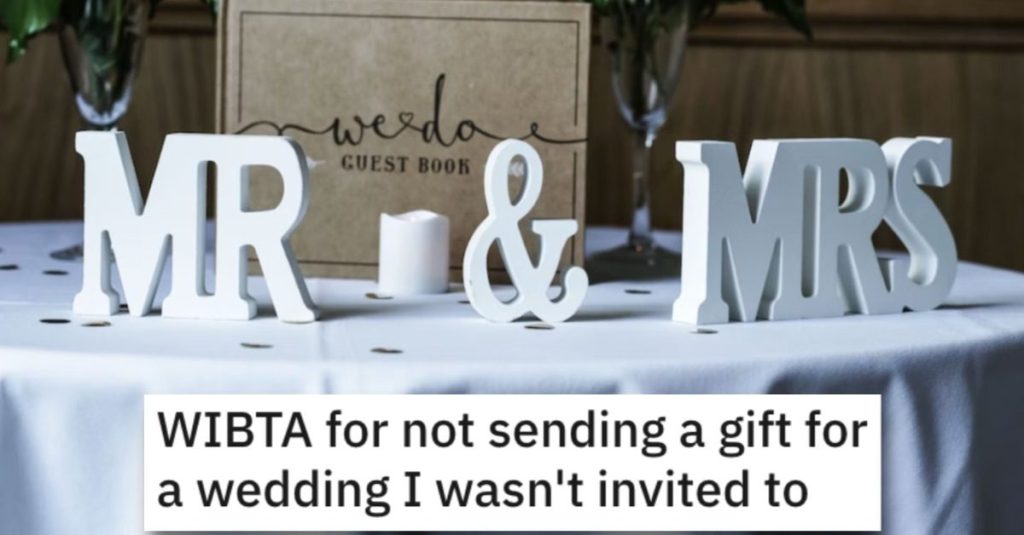 Is She Wrong for Not Sending a Gift to a Wedding She Wasn’t Invited To? People Responded.

Call me crazy, but if I wasn’t invited to a wedding, I don’t think I’d be sending a gift…

But I guess we should probably get all the details before we make a judgment call, okay?

WIBTA for not sending a gift for a wedding I wasn’t invited to?

“My cousin “Ted” and I are close in age (few years apart) . We were always close as kids and even into adulthood still kept in touch.

Then Ted met Maddy a few years ago and started bringing her to family stuff. I don’t have a problem with Maddy but we just didn’t click. We talk at family stuff but she’s not someone I want to hang out with or become friends with.

My other cousin (Ted’s sister) really clicked with Maddy, which cool and good for them but I just…don’t. I’m nice and polite but I don’t got out of my way to become her bestie.

My aunt (Ted’s mom) really pushed her on me though. I don’t know if it’s because were the same age-ish or what but it was annoying. Anytime we were both at an event she’d find some way to push us together. I felt like a little kid being forced to play with someone.

My own college graduation party (grandparents had it because they have a bigger house/yard) had to be moved because Maddy had to work and it wouldn’t be nice to exclude her. Even though it was inconvenient for me and meant most of my friends couldn’t come and I had to rush around.

Anyway like I said I’ve never been rude or anything to her just never really bonded with her.

So Ted and Maddy are getting married soon. I knew he was engaged but I didn’t know the wedding was when it is. Another family member asked what I was getting them for a wedding gift and I said “I don’t know” they said “better figure it out before wedding date- (which is very soon)”. I said “oh I didn’t know, I wasn’t invited”. They said “well maybe it’s not personal, you should still get a gift for them”.

I asked my dad when he got his invitation and I guess it was a while ago. I said it’s c**ppy that I wasn’t invited when I had to reschedule my party for them.

He said “that was a graduation party, this is a wedding.Now that you know about it just be a bigger person and get a gift don’t be petty”.

I don’t want to buy them a gift, and I probably won’t invite Ted to any future events I have. I don’t know why I was left out when everyone else in the family was invited. Maybe because I’m the only cousin on this side. Maybe it’s a budget thing and not personal but I don’t want to spend the money on a gift when I wasn’t cool enough to invite.

To me it’s like having a birthday party and expecting someone I didn’t invite to send me a birthday present.

Now let’s take a look at what Reddit users had to say about this.

This person said she’s NTA and that she doesn’t need to send a present. 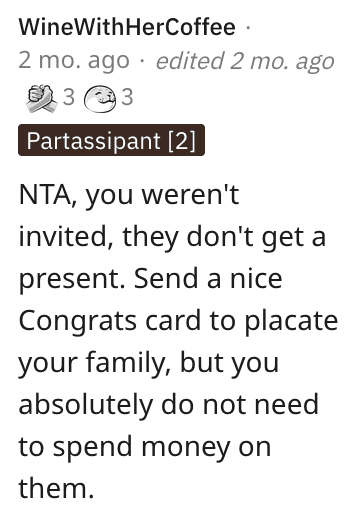 And this reader said they don’t even think she needs to send a card. 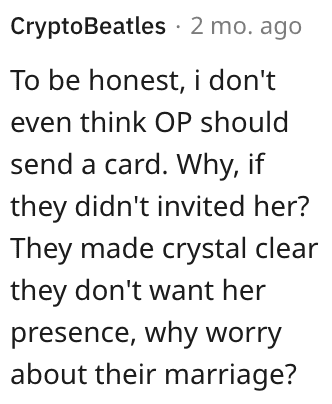 And another reader said she’s NTA and that they think her family sounds pretty toxic.