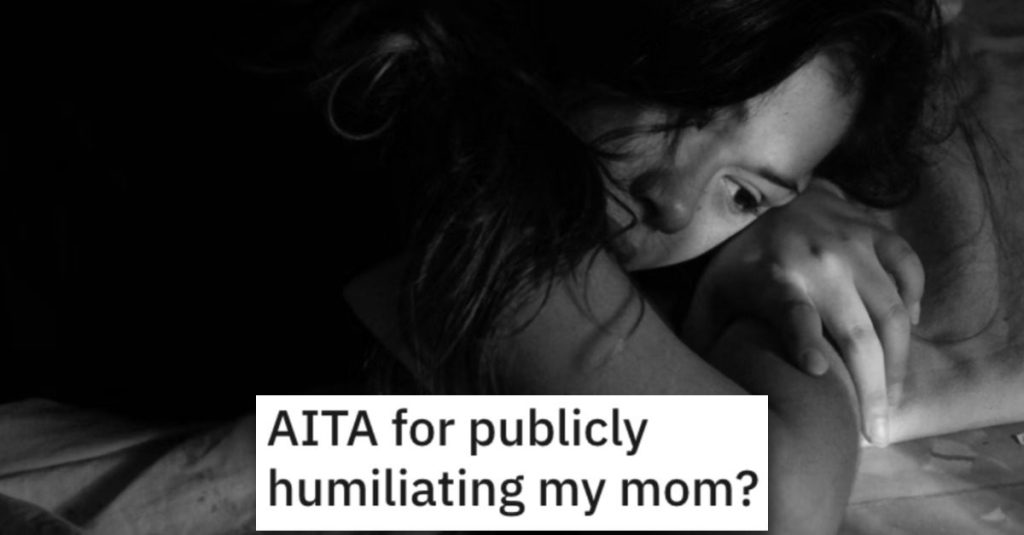 Was She Wrong for Publicly Humiliating Her Mom? People Shared Their Thoughts.

Have you ever humiliated someone in public?

And it could have been someone you know or didn’t know?

Yeah, when that happens, people tend to get pretty upset, you know what I’m saying?

So that’s why this woman asked the readers on Reddit’s “Am I the A**hole?” page if they thought she was out of line for humiliating her mom in public.

AITA for publicly humiliating my mom?

“I was contemplating whether to post this for a while but now I’m curious.

When I was 16, our mother married her new husband and has 2 kids with him. Ethan’s father isn’t in his life so he stays with them full time but I spend more time with my dad and his family because I just get along with them better. I love my mom but she can be a bit much sometimes so I rarely see her. Ethan and I text occasionally.

It was my mother’s birthday a few days ago and while I was visiting I noticed that Ethan and my newborn half sibling weren’t around. I asked my mom where they were at and she said that she asked Ethan to check up on the baby while she took a break. We were all in the backyard btw which is MASSIVE.

But yeah ok no biggie.

But some time later I still couldn’t find him and so I went to Ethan’s room and he’s rocking the baby while she’s inconsolable and he’s crying too because she won’t stop. There were diapers and baby formula everywhere and he was saying that he tried everything but she won’t stop.

I managed to calm them both down somehow and asked Ethan why he didn’t just call someone for help. He said that he’s usually really good at this and mom makes him take care of the baby all the time so he just panicked. He then told me that he helped out with our other half sister when she was a baby as well and still takes care of her.

I was really upset. I mean yes there’s nothing wrong with needing a break but Ethan’s a 17 year old boy. He’s not a father or a mother but apparently he takes care of our half siblings more than our mom and step dad?

I walked up to my mom while she was talking to a group of people and basically told her that I can’t believe she’s dumping all her responsibilities on Ethan. She knew what I was talking about immediately and told me to relax and that Ethan likes it blah blah.

I told her that while she was out here having a blast her son was sobbing in his room because of how overwhelmed he was. She got really red and everyone went silent which was awkward but yeah.

I later got a call from my mom saying that she respects my opinions on this situation but that I didn’t need to publicly humiliate her in front of her friends and coworkers. Apparently, her boss was there too and he’s being very cold to her. Idk I just can’t get Ethan out of my head.

One person said that she humiliated herself.

And this individual said she’s NTA and they had some thoughts about her mother. 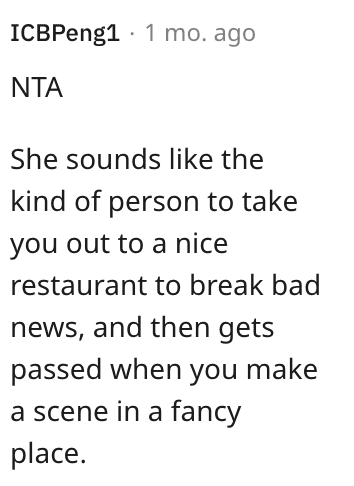 And another individual said she’s NTA and said that public humiliation might make her mom change. 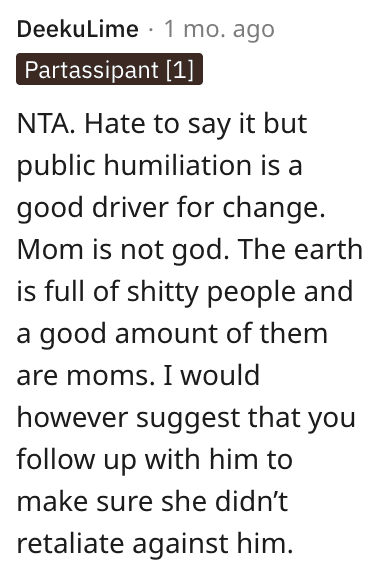