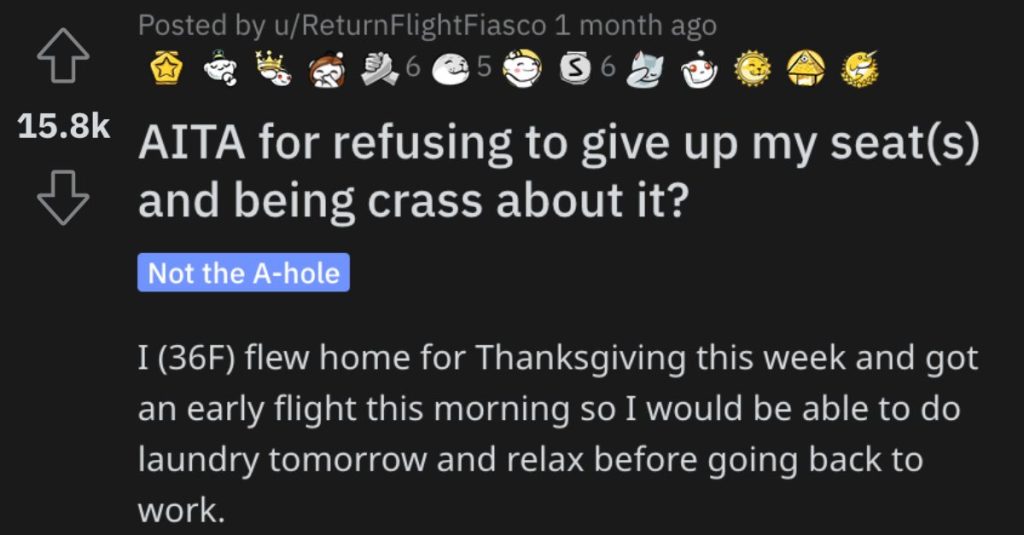 Is She Wrong for Refusing to Give Up Her Seat on a Plane? People Shared Their Thoughts.

Hey, if you pay for a specific seat (or seats) on a plane, those babies belong to YOU.

And I, for one, think it takes a lot of nerve for someone to try to give someone a hard time about that.

So is this woman a jerk for refusing to give up her seats on a plane?

Check out her story below and see what you think.

AITA for refusing to give up my seat(s) and being crass about it?

“I (36F) flew home for Thanksgiving this week and got an early flight this morning so I would be able to do laundry tomorrow and relax before going back to work.

I am a plus-size woman (the cause was finally diagnosed after three years of weight gain, I’ve lost 4 lbs in the last four weeks!), so when I booked my flights, I spent extra money and booked two adjacent seats so whoever had the third seat in my row would not have to be squished up in my business.

Flying out was great, the other person in my row was cool and we shared the middle seat and snacks and played pokemon on our switches and visited each other’s animal crossing islands.

Flying home was where things became a bit more problematic.

I was settled into my pair of seats, and a gentleman tried to sit his daughter (~12, not a waif, nor was her overweight dad) in my middle seat, where my bum is taking up a good third of the middle seat. I said politely, “I’m sorry, that seat is booked. Your daughter can’t sit there,” while putting my hand on the other 2/3s of the seat.

He immediately complained that he hadn’t been able to book seats together and he needed to sit with his daughter. I shrugged and said I was sorry, but it wasn’t my problem, that wasn’t his seat.

He called over a stewardess to complain, I explained my situation and showed my pair of tickets, and the flight attendant offered to comp my extra seat. I said no thank you, I needed the extra room and waved to where my bum was partway into the middle seat.

The stewardess came back ten minutes later with a wife from a couple who agreed to switch seats so the man could sit with his daughter. But not without attempting to shame me for not be willing to help out a dad in need and commenting about how selfish I was. (the woman who switched seats was rude, not the stewardess! The stewardess was nothing but polite!)

I said, “I booked early, and I booked two seats together because to put it plainly, I’m fat. His two seats were separate seats. How exactly do you propose I split my fat a** in half to sit one half in one seat and the other half in his other seat?”

The woman turned red in the face and b**ched at me for being “disgusting”, I replied that his lack of planning was not my emergency, and she scowled at me for the entire rest of the flight. When I told my folks about it after I landed, my dad thought it was the funniest thing he’d ever heard, but my mom yelled at him for encouraging him and said I should have been more willing to help out a dad with a kid when I had two seats.

This person said she’s NTA and that this isn’t hard to figure out. 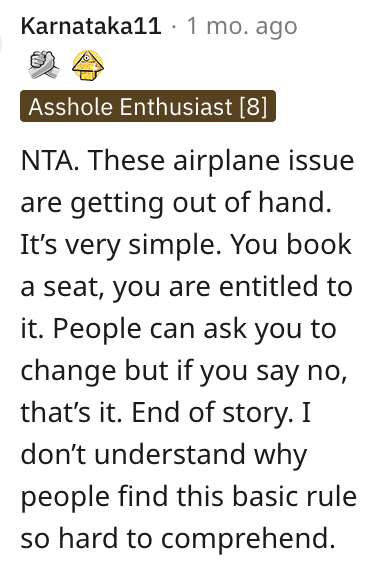 Another Reddit user agreed and said this woman was actually considerate enough to buy an extra seat.

And this individual said you get what you pay for! So book your seats accordingly…