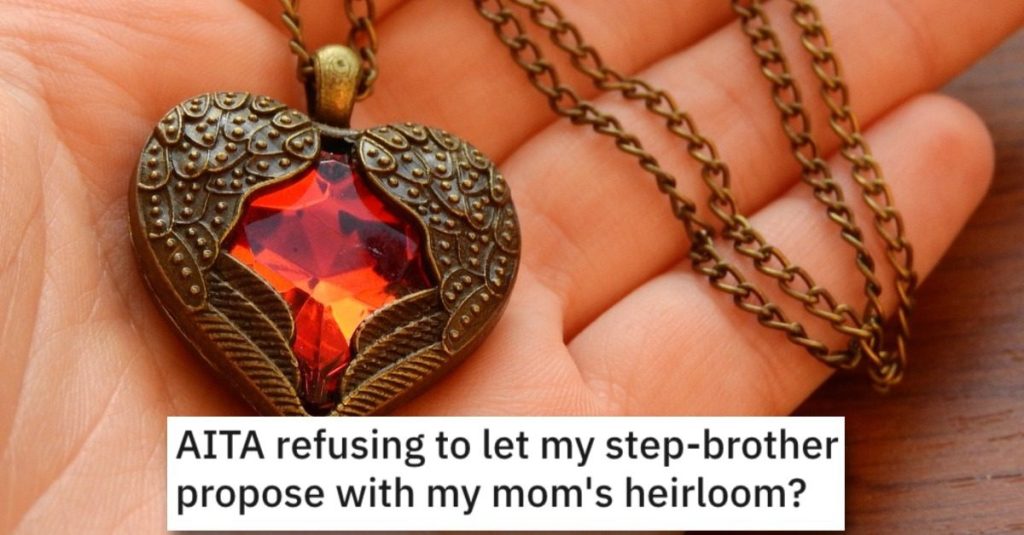 Is She Wrong for Refusing to Let Her Stepbrother Propose With Her Mom’s Ring? People Responded.

Uh oh…it’s another story from Reddit’s “Am I the A**hole?” page that involves a family heirloom…and some family drama.

Take a look at this one and see if you think this woman was out of line for what she did.

AITA refusing to let my stepbrother propose with my mom’s heirloom?

“My mother passed away 3 years ago, I (19F) was her only biological child but she took care of my step-dad’s children (25M, 26M and 30F) since their mom d**d giving birth to 25M (I’ll call him Jon) so my mom what their only maternal figure, they married when I was 2 and she took care of them ever since.

I’m not personally close with either of them or her husband and when she passed, I moved to my dad’s home full time and never spoke to them again.

Now, my mom left some money to each of them, but nothing like jewelry, family heirlooms or things like that. Jon wants to get married to his long term gf and a few weeks ago sent me a message on fb saying he wanted to talk and I agreed, I congratulated him and everything, but he asked for my mom’s engagement ring since she always ”promised it” to him.

My mom and Jon were really, really close, closer than me and her maybe, I knew she loved him the most and it hurts, yeah, but whatever. He showed me some old messages between him and my mom saying things like ”If you want the ring, just ask my love”, or ”I have the ring kept in a box for you”, but she never actually changed her will for the ring to be left to him and she had plenty of time to do so, because she did left them money.

This rings go back to a few generations back, maybe 200-250 years old, it was my mom’s, my grandma, my great-grandma etc, my mom wore it all the time and it’s the only piece of jewelry she actually liked. I said I was gonna thing about it before leaving.

I consulted my mom’s lawyer and he said that they have no claim over the ring because it’s stated for ”the rest” to go to me while they received money and that if they try to sue, it’ll most likely be a lost on their part, so I’m in legally in the clear.

I texted my step-brother again and said that I’d given it a thought and ultimately decided to not give the ring, but that he was welcome to pick another piece of my mom’s jewelry box. Everything exploded, Jon and his brothers are calling me an AH because ”She promised him” and idk what to do, he’s calling me a thief and a jealous sister.”

And this reader said she should get to keep the rings.

Another Reddit user made a good point: she owns these fair and square and shouldn’t have to give them up if she doesn’t want to. 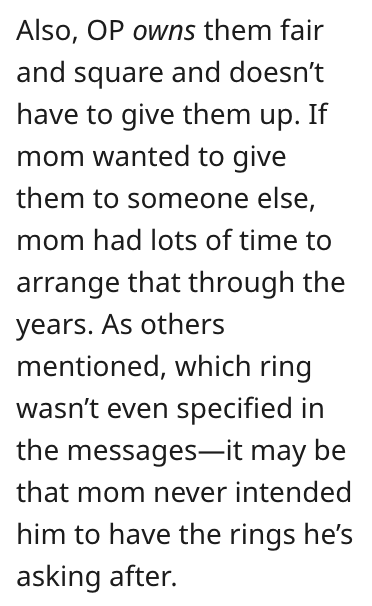