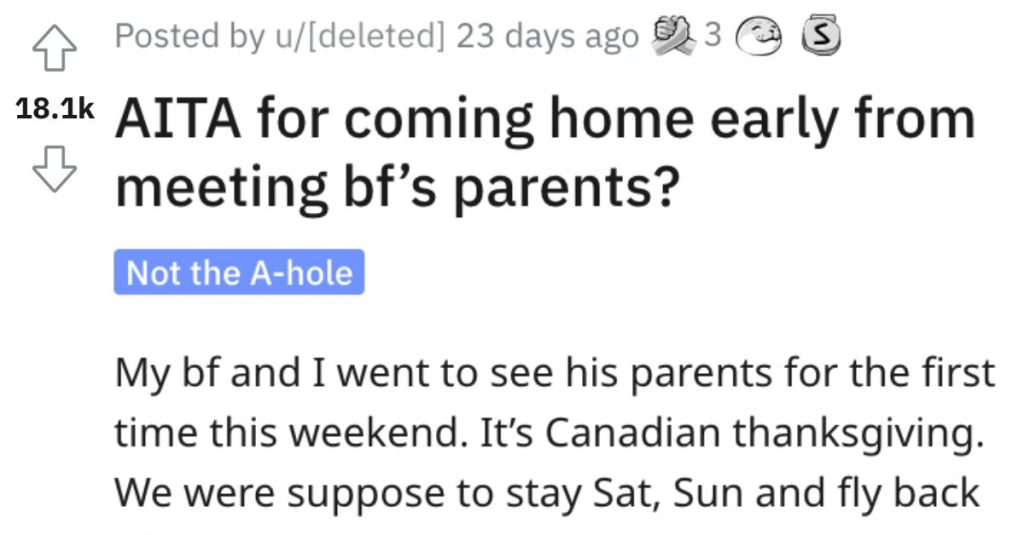 She Left a Visit Early After Meeting Her Boyfriend’s Parents. Was She Wrong?

Have you ever bailed in the middle of a trip before?

I’m no genius, but when that happens, I’m pretty sure that things might not be going very well…you know what I’m saying?

So is this woman a jerk for leaving a visit early after she met her boyfriend’s parents?

“My bf and I went to see his parents for the first time this weekend. It’s Canadian thanksgiving. We were suppose to stay Sat, Sun and fly back afternoon Monday. I’m writing this Sun night already back in my own bed.

My bf’s parents greeted us at the airport and brought us home. They then proceeded to ask me if I had drugs in my bag and I was pretty shocked because who asks that? I said only Tylenol and they nodded and showed us to our rooms which meant I got the guest room and my bf was to sleep in his old room.

I didn’t answer and then confronted my bf in his room and asked why I was asked to pay. He just says it’s something they ask of their friends as well, when they have a bbq they ask people to pay their portion. Honestly I’m shocked they have friends. I reminded him he has eaten at my parents place dozens of time and was never asked to pay.

He claimed if they asked he would have but they never did. Because it’s rude to do that to a guest! But his mom came and got me and escorted me to my room. I was fuming and looking for tickets home and texted my bf to say I was going home tomorrow. He called me and begged me to stay saying his family already don’t like me for not agreeing to pay for dinner and I’m just making it worse.

I ignored him and rebooked an early flight (which was very expensive) and got a cab to the airport in the morning. I told my friends this who had confirmed they’ve never been asked to pay for a meal while they were a guest. And if they were struggling why even invite me over? Is this normal practice? Their house was pretty big I don’t think it was a money thing for them.”

One person said she’s NTA and she just got a glimpse of what her future might look like. 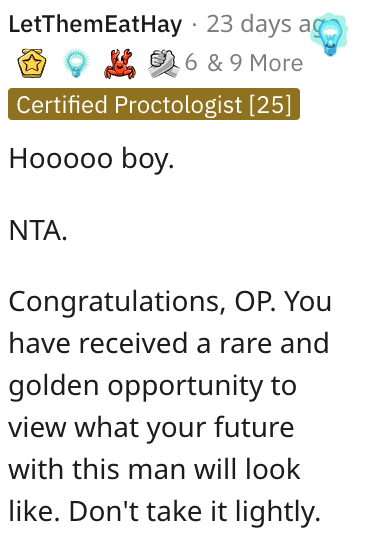 Another person agreed and said her BF and her family sure are a**holes.

And this individual said her BF should have preempted this situation.